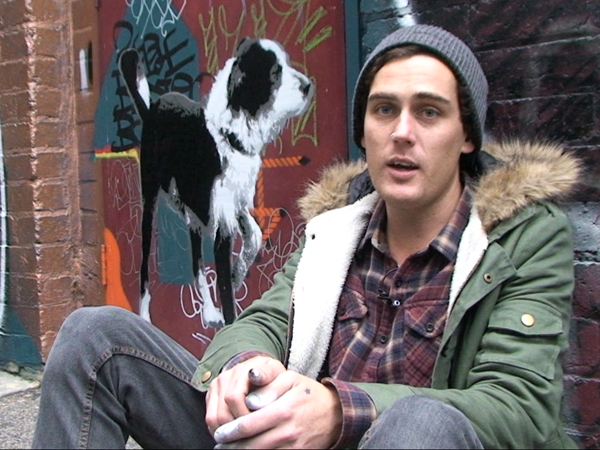 The colourful murals that are plastered along walls in dark alleys and along the sides of buildings have become part of the fabric that drapes the city of Melbourne.

Over the past couple of years there seems to have been a real shift in the perception of street art, from  being seen as vandalism, it is finally recognised it as a legitimate art form.

In some areas, entire laneways are left for artists to create and share different images. Streets like Hosier Lane and Union Lane almost act as outdoor galleries in that they are filled with loads of colourful artworks.

Damien Mitchell, aka ‘Darky’, honed his painting skills whilst living in Prague, and has now come home to Australia to leave his mark on the city he loves.

His favourite subject to paint is from a photo of his dog, Frantisek, a stray that he became attached to in Prague. The dog followed him around and eventually Mitchell unofficially adopted it. It didn’t take long before people started recognising the duo around the streets as a painting team.

Paddy Naughtin is a third-year Bachelor of Journalism student at La Trobe University, and the Sports editor of upstart. You can follow him on Twitter: @PaddyNaughtin.

Nick Crook is a third-year Bachelor of Journalism student at La Trobe University. You can follow him on Twitter @NickJCrook.

Grant Condon is a third-year Bachelor of Journalism student at La Trobe University and the sports editor of the Maryborough District Advertiser. Follow him on Twitter @GrantCondon.