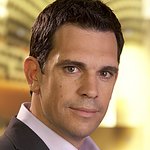 Peak-hour traffic is proof that for many people the standard work week is still based upon a ‘nine to five’ routine. But while thousands of Melburnians are already putting back the first coffee or perhaps making the late dash after a sluggish start, Paul Kennedy is already knocking off.

As a presenter on ABC News Breakfast (ABC2, 6am-9am),Kennedy brings the overnight and breaking sports stories to viewers before heading home from the ABC Melbourne headquarters in Southbank,against the inbound traffic towards Frankston.

Needless to say though, his day is far from over. Kennedy is planning a sport show on the ABC’s yet-to-be-launched 24-hour news channel, while also co-writing a book on sex abuse in the Catholic Church. ‘It’s basically examining the Australian system and pointing out that it’s no better than anywhere else in the world,’ he says. Throw in his duties helping to raise two sons aged four and two and a role as an assistant coach at Frankston Football Club and it’s fair to say Paul Kennedy is a busy man.

He played for the Dolphins in the VFL and also for Mt Gravatt of the QAFL , but by this time had already begun a career move into journalism – indeed his move north was due to work. Football remains one of Kennedy’s passions and has shaped his career to some extent, particularly when, as coach of Seaford, a drug culture swept through the club he had played for as a junior. The club’s journey towards living clean, which culminated in winning the premiership, was documented in Kennedy’s short film Drug Game, which was a finalist at the 2008 Melbourne International Film Festival’s ‘Footy Shorts’ competition.

But journalism has remained a constant through a career that started with him working as a copy boy with the Herald and Weekly Times in 1994, and has included stints on television with channels Ten, Nine and now the ABC. And he’s also written for Inside Sport, The Sunday Age and The Australian.

He discussed these last fifteen years, and the fifteen to come, with Evan Harding.

What made you go into journalism?

I was good at English at school and I liked writing so I figured that that would probably be the best thing to go into. I liked footy, obviously, and I wanted to play in the AFL but when it was pretty clear, by the time I was 19 or 20, that it wasn’t going to be a career, then I had to do something else. I figured that if I could write stories then that would be a good use of my talents.

So was the idea always to become a sport journalist?

Not really. Well, I sort of had that in mind but I’ve always done sports stories anyway, being a news reporter, but I’d never wanted to sacrifice playing football; I thought I could have a career as a journalist and play football. So that was the balancing act all along and being a general news reporter it was easier to have weekends off to play footy during the winter.

One of the major criticisms of sports journalists is that they are not as critical as they could be on certain issues. What is your view on that?

I think it depends on what sort of position that the journalist is in. I definitely feel that sports journos are compromised by their access, and threats of limited access if they do criticise sporting bodies … it’s not just the AFL, I would suggest that any big, powerful sporting body would be able to limit access to anyone who was too critical … It’s something that each person has to decide how they approach it because journalism can be a big balancing act. There’s no use acting in a way that’s going to mean you can’t cover a story, sometimes you have to work with the restrictions and try and find a way.

Yeah, I went to a media briefing at the AFL which was a chat before we had a press conference, so it was with our cameras, and I asked a lot of questions in that particular press conference following the chat and was told that I wasn’t allowed to go back to any more briefings. I think the excuse was that they’re only allowed to have ‘football reporters’ at those briefings and my editor said that I was actually a sport reporter and it was stated that I wasn’t allowed back in.

Does it end up becoming a situation that when you have to question a club or organisation that a mainstream has to take over?

That routinely happens, news journalists are sent to cover stories involving scandal, or something that’s going to raise tensions or compromise the regular beat journos. That happens in all media and for good reason, because that means news journos can come in and use their skills and not have to worry about compromising any sources or shooting themselves in the foot.

So in a sense sport journalists are bound by their history?

Some are, you get to a point where you are respected for challenging decisions and there are many good examples of that, but as a young journalist particularly, or someone without a great profile, it can be difficult to stick your hand up and ask the tough questions.

What drives you these days? What goals do you still strive for?

I like covering good stories that people find interesting and perhaps inspirational. I think basically most people want to be inspired, and I’m no different: I want to examine and report on stories that can inspire or make a difference to people’s lives. That’s always been the thing that excites me about journalism. In between the mundane and routine you occasionally become inspired by the deeds of people, and that’s what keeps me interested in reporting.

I still want to try other forms of journalism as well. I still perhaps think that I would like to go back to newspapers at some stage, because I did enjoy that, or maybe work for a magazine one day, or even do some radio broadcasting, so there’s still a lot for me to try. I’m not in a hurry to do any of that but I think maybe the lure of doing those different things is good as well.

Do journalists have to be all rounders these days?

Possibly. There’s a lot to be said for people who specialise though. If you specialise in something it can be that your stocks go up within the industry. Being an expert at something is worth its weight in gold and you’ll always get well paid. But I find that most journos are the same in that they get a bit restless if they stay in one spot. Mostly, I think journos have a similar personality type that draws them to the industry and part of that is the variety that they can get so I think it’s advantageous to have different skills, but I don’t think there’s any general rule. I think you need to cover all sorts of different styles and reporting methods; some of the best and well-paid journos are the ones that just specialise in the one thing.

In three words, how would you describe your journalistic style?

I guess the three things that are most important to me and I hope that I am: honest, persistent and innovative. You’ve always got to try and look to do things differently because if you’re not improving on the way things are done you might as well move on and do something else.

Evan Harding is a Master of Global Communications student at La Trobe University. More details of our Working Journalist project can be found here.