In 2013, Mitch Wood was diagnosed with Ankylosing Spondylitis. He is using his solo music project, Peach Body, as a vehicle to overcome the condition. 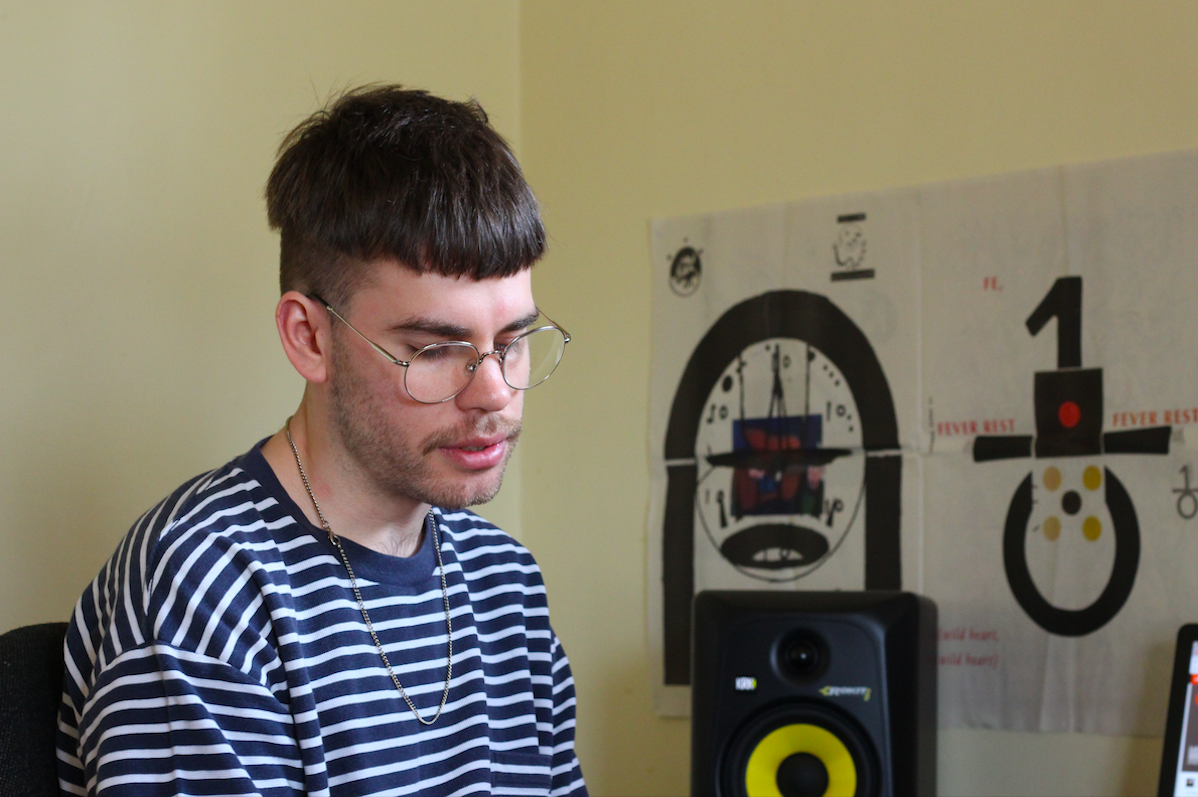 Mitch Wood greets me at the door of his suburban house in a leafy part of Coburg, his oversized glasses almost enough to mask his permeating nerves.

Wood’s bedroom doubles as a production studio for his multiple projects. The space is decked out with some dusty keyboards, synths and a nest of twisted chords. The walls are covered in abstract photography, drawings and creepy posters from Bon Iver’s album 22, A Million.

It could be an effect of Ankylosing Spondylitis (AS), a condition that’s been plaguing him over the last year.

Affecting about one to two percent of Australians, AS is an inflammatory arthritis that appears as a result of a faulty immune system. It mainly affects the spine.

“I was initially diagnosed in 2013, and it has stayed pretty dormant other than a few outbreaks here-and-there,” Wood told upstart.

“Last year I started to experience secondary pains. Starting with pain in my feet and eventuating to my arms, lungs, neck and back. I’ve slowly declined over time.”

Though Wood’s condition has hindered his health, wellbeing and creativity, in some ways it’s been a blessing-in-disguise.

Last year, while struggling to find the motivation for another project he’s involved in, Leisure Suite, Wood shifted his focus to a new solo venture. Peach Body was borne out of the dark place AS had put him in.

Though the material shares the same lo-fi aesthetic that breathes through Leisure Suite, Wood wanted Peach Body to be his outlet for dance-sensible music.

“I feel a lot of Leisure Suite’s songs come from a place of heartbreak, which means they lead more towards a half-beat, ballad style.

“It felt more fun to stray from this on Peach Body and give the tracks more of a dance-y feel.”

“I initially began writing for Peach Body as a way to distract myself from the health issues I was dealing with. I never really wanted to share any of it; it was more of a cathartic release.

“As time went on, I had slowly completed a collection of tracks that I felt shared this common theme of pain and confinement.”

But Wood didn’t want his solo project to be defined by his struggle with AS, so he decided to send the beats to friends for collaboration.

“By giving the songs off to friends, I was able to shake the sense of inhabitation and open it to other stories and emotions of the artists I worked with.

“It became less of a woe-is-me project and more of an invitation to share in our trauma and celebrate the ability to overcome.”

With Wood reduced to his bedroom studio as a result of AS, the recordings are a product of the DIY environment he has created. There’s no fancy equipment, just the vintage instruments in the small workspace.

“This new project had the limitations of equipment, space and health, so it was more about the ideas and finding a way to be creative with what I had.

“A lot of the songs were sounds I had run out of this keyboard I had to beg my high school teacher for in 2012. It’s one of those old clunky instruments with the tacky symphony sounds.”

“I would pick out some of the instruments, run it through a lot of reverb and record it. I’d then cut it up, re-pitch it and repurpose it, turning it into something new.

“Initially I was disheartened by the dishevelled sound that came out the other end, but I ended up beginning to appreciate the earnest soul behind it.”

As for the musical influences behind Peach Body, they’re wide-ranging.

The first song from the project, ‘Boy In Love’, is indicative of this: there’s surging bass-lines, twinkling synths and even some saxophone thrown into a crowded crescendo. It’s a melting pot of dance, indie and jazz.

Wood’s beginnings as a musician seep through, back when he “used to record dumb, poor-sounding covers on [his] guitar”. Guitar hasn’t been heard much on Leisure Suite’s pop songs.

“I listen to a lot of indie rock, bands like SALES and Beach House. I love local bands Good Morning and Retiree.

“I don’t make music like that… but I’ve got this Peach Body demo that has a lot of guitar in it.”

‘Boy In Love’ is the only song released from the collection so far, featuring the vocals of Melbourne artist Wilhelmina McRae, who performs as Zellow. McRae’s lyrics transform the head-nodding dance-pop beat into an ode to a damaged relationship.

“The song is about wanting out of a relationship and questioning why the other person is trying to make it work, when really it’s time to move on,” McRae told upstart.

Though there’s only one track on offer, there’s a lot more to come.

In fact, there’s at least nine tracks in a private folder in Wood’s Soundcloud profile, plus a few demos that he’s grappling over. He’s still unsure whether the release will be an album or an EP.

The next Peach Body single arrives on November 8.

Tennyson Tinning is a third year Bachelor of Media and Communications (Sport Journalism) student at La Trobe University. You can follow him on Twitter @tinningtennyson