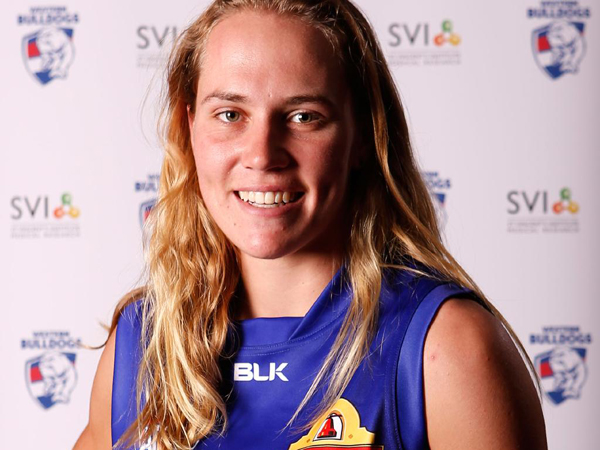 On a cold April night in Melbourne, Randall found herself surrounded by the next generation of AFL stars.

Yet these budding prospects were not your stereotypical footballers. They were trailblazers for a new evolution of Australian Rules Football, a group of women making headway in a sport traditionally dominated by men.

Randall was not anticipating to hear her name called, in fact she had wrestled with whether she should nominate for the 2015 women’s AFL draft in the first place.

“I just thought there was no chance, but a few people told me I should just do it anyway,” Randall said.

After eventually deciding to nominate, Randall was at the function for the “formality of it” and to provide encouragement to her fellow nominated teammates.

The evening ran its due course, with the first 32 picks offering few surprises. Yet, Randall’s night and footballing career was about to be flipped on its head.

Those six words hung in the air as Randall sat in disbelief. Out of the 236 women remaining in the draft, she had been selected.

“It took me a good couple of seconds, a few people had to push me up to get my jumper.”

After playing her first game of football no more than a year ago, Randall was now part of an exclusive group of women on the frontier of Australian sport.

A simple weekend passion was suddenly so much more. In the matter of a single night football had gone “from nothing to being [Randall’s] entire life.”

Randall’s football career began in similar fashion to her draft selection, completely out of the blue.

After successful stints in both athletics and soccer, Randall decided she wanted to try something new and “came across football by accident.”

Her interest was sparked after she stumbled across a photograph of primary school friends participating in youth football training.

After making contact with her old peers, she joined in training with the East Malvern Knights youth team, managing to string together a solid number of games by the season’s end.

The following year was a whirlwind of change and opportunity for Randall. She joined the St Kilda Sharks senior team, was drafted by the Western Bulldogs and got the chance to play at Etihad Stadium.

Randall, who had still yet to complete a full season of football, now found herself playing in front of thousands of fans at the game and watching at home.

“Its definitely different playing in front of a big crowd. All of the sudden you are performing and you’ve got to be entertaining as well. You feel professional.”

Randall’s family is no stranger to the big stage, her great-grandfather, Vivian, and grandfather, Trevor, both played out successful careers with Hawthorn.

From their legacy Randall’s passion for Hawthorn was born, along with the admiration of her favourite player, Cyril Rioli.

As a small forward herself, Randall is inspired by Rioli’s ferocity around the ball and his ability to beat his man in one on one situations. Plus, she adds, “everyone wants to be Cyril Rioli.”

With her Rioli inspired pace and attack on the ball, Randall has surpassed all expectations she originally set on her football career, yet is determined to continually improve her game.

“I just want to get stronger and more skilled. I feel like I need to improve all aspects of my game.”

After leaving the St Kilda Sharks at the end of the 2015 season, Randall joined the Eastern Devils earlier this year for the debut VFL Women’s competition.

Coupled with university studies, her “obsession with coffee” and adjoining barista job, life is truly “university, work and footy” for the 20-year-old Melburnian.

With the prospect of the national women’s league on the horizon, Randall is optimistic about the possibility of making a professional career out of her passion.

For now, Randall will bide her time, waiting for the next opportunity to present itself. Which if it follows the script, will probably appear when she least expects it.

Daniel Freeman is a second year Media and Communications (Sports Journalism) student at La Trobe University. You can follow him on Twitter:@dlfree3.