PETA has stirred controversy ahead of sheep cruelty charges in Horsham this Friday. 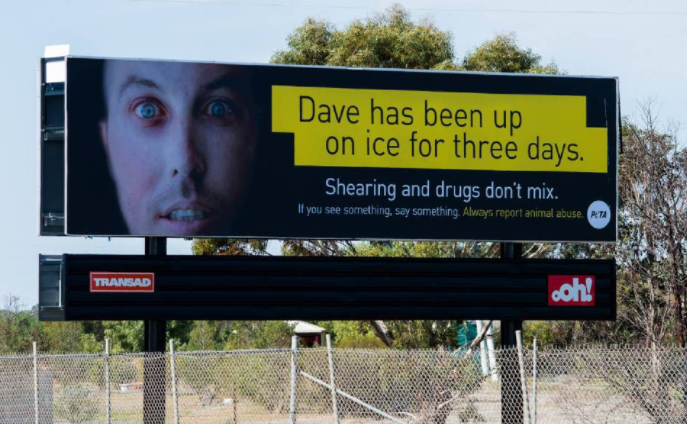 People for the Ethical Treatment of Animals (PETA) have erected a controversial billboard in Horsham this week which aims to raise awareness of drug-fuelled animal abuse in the shearing industry.

The billboard says ‘Dave has been up on ice for three days. Shearing and drugs don’t mix’.

The billboard went up ahead of the sentencing scheduled this Friday of four shearers charged with a combined count of 60 animal cruelty charges at the Horsham magistrate’s court.

The men pleaded guilty in late February, with video footage obtained by PETA presented as evidence against them.

The footage showed the men punching the sheep, beating them with shearing handpieces, gouging the sheep in the eyes, lifting and then slamming the sheep down.

However, Victorian Farmer’s Federation vice president Brett Hosking told The Age that he was flabbergasted by the billboard, and accused PETA of pushing their agenda against shearers.

Hosking also said that there was no denying that there are issues with drugs in farming communities but that farmers have a zero tolerance drug policy.

“Drug use and mistreatment of animals is never tolerated by farmers in Victoria,” he said.

However, an Agriculture Victoria spokesperson said that PETA had made no accusation or reference to drugs in their complaint to the department against the men.

National Farmers Federation president Fiona Simson told The Age that drugs in rural communities are a complex problem and that just reporting your mates won’t fix the problem.

She said that the industry is working on fixing the problem of drugs and alcohol in sheds with a particular focus on ice.

Shearing Contractors Association of Australia secretary Jason Letchford said that the billboard was not necessary.

“The graphic videos were a big enough wake-up call without the humiliation (the billboard presents) to the individuals involved,” he said.