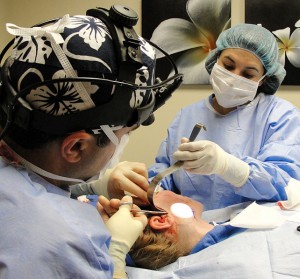 We’ve all heard the sayings: ‘you can never have too much of a good thing,’ and that ‘beauty is in the eye of the beholder,’ but when it comes to cosmetic plastic surgery, it seems the line between a small nip here and a little tuck there and looking like a plastic doll has been become blurred for many people.

There is nothing wrong with correcting an imperfection to enhance your self-esteem, but for some, going under the knife becomes an obsession. Recently in the US, a father of two underwent surgery to enhance his appearance. Silicone was injected into his genitals to increase the size and the result was fatal. Like a tattoo, people believe that plastic surgery is a kind of science that can increase the beauty of an individual. Some may argue that the way their body looks physically does not reflect who they are; they should have the right to change it. Just as we dye our hair or pierce our bodies, so too should we be allowed to express our individual characters through cosmetic surgery; after all, many would argue that it is our legal right to ‘freedom of expression’. But when does it become too much?

Many people now go into a plastic surgeons office requesting the lips of Angelina Jolie or the behind of Jennifer Lopez, and who could forget Erik Sprague, the ‘Lizard Man’, who has spent hundreds of thousands of dollars on surgery to look like a lizard. So why has the permanent altering of the body become so popular?

Distinguished plastic surgeon Dr Victor Zielinski believes ‘there has been a huge increase in the amount of people requesting plastic surgery driven by the media and their own vested interests to become beautiful like the way celebrities are viewed.’ Whilst he is cautious about who he operates on, he says he has ‘operated on a few so-called celebrities but mainly has tried to talk them out of having too many unnecessary procedures.’

While there are no figures identifying how many or what the most popular surgeries are performed in Australia, the Australian Society of Plastic Surgeons states that there has definitely been a rise in the past decade. To see the full effect of plastic surgeries, we look to Hollywood, destination America. Early this year, the American Society of Plastic Surgeons released its annual report on cosmetic procedures. Nearly 14 million cosmetic surgeries were performed with the most commonly performed being the injection of botulinum toxin type A injection – Botox – and operations involving ‘lifting’ or ‘tightening’ areas of the face. With the average operation costing approximately $4000, besides hindering the finances of patients who opt for the procedures, what are the real dangers of cosmetic plastic surgery?

Dr Zielinski states that the main health implications for having too much surgery are mental. ‘Having operation after operation to enhance your appearance merely reinforces a person’s insecurity. If you have an obvious deformity that can be fixed with surgery, that is fantastic. But to go on and on is a sign of deeper psychological problems and, personally, I refuse to operate on such people no matter what they request.’

Like with any type of surgery, each cosmetic procedure needs healing time and after-care, and as with any surgery there are risks. The Victorian Better Health website lists the very real dangers of undergoing cosmetic surgery: problems related to anaesthesia and surgery, excessive bleeding, infection, scarring and failure to heal. So while you may have envisioned going into surgery with an A cup, and walking out with a perfect set of DD’s- you may very well find yourself with a pair of oddly shaped breasts due to complications during surgery, or find yourself not being able to open and close your eyes or mouth properly after that last facelift.

Dr Zielinski suggests that if you do decide to commit to plastic surgery, ‘familiarize yourself with the risks and the benefits of surgery and make sure you understand exactly what the operation entails. The most important thing is to do your research when choosing your surgeon. Make sure you consult a licensed doctor with proven credentials and one whom you feel comfortable with.’

And yet, cosmetic surgery is only one extreme example of people becoming obsessed with enhancing their appearance. Having worked at a solarium for the past two years, seeing person after person walking in as white as a ghost and walking out months later, as dark as the night sky but all the while stating that ‘I don’t feel like I am getting any darker’ is another example of beautifying gone too far. Like the guy at the gym who works out so much that he can only walk through the gym door sideways, the people whose teeth are literally glowing from their dark orange glow, or the women who only have one facial expression after their umpteenth face-lift, how much is too much?

I guess the moral of this story is to proceed with caution when it comes to any form of beauty enhancing procedure, be aware of the risks and remember that sometimes flaws can add character. And maybe, if we ever find ourselves considering injecting cooking oil into our faces like the infamous story of a Korean woman who was addicted to surgery did some years ago, we can say ‘this is too much’.