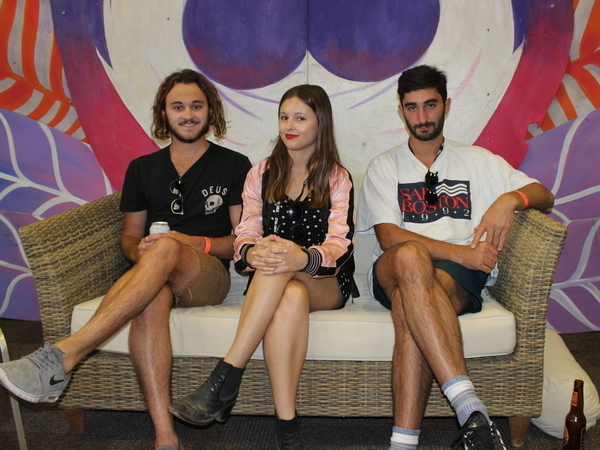 San Cisco are due to be on stage soon and there’s a lot of movement around us, still, it’s far from awkward as upstart sits down with lads (and lass) pre gig.

The four-piece group from Fremantle have come a long way since their breakthrough track ‘Awkward’, which has since been viewed more than 8 million times, launched them to very much front and centre in the Australian indie music scene.

They exude a certain air of calm warmth wrapped in a distinctly friendly demeanour as they explain what it’s like to grow up touring the globe whilst transitioning from late teens to early 20s.

Your latest album Gracetown is pretty versatile – it’s usually on repeat when I’m feeling a bit crap, but at the same time there’s a lot of tracks on that album that I go to when I’m feeling on top of the world – is that something you aim to do with your music?

Jordi: Yeah, I mean we don’t look at it as if we’re saving people (laughs) but we would never do something that is completely selfish. We don’t do it just for ourselves at all. We write music for people to enjoy and if that helps someone then that’s great.

You’ve come a long way since debuting as King George back in 2009, what’s it like doing world tours now as opposed to back then?

Jordi: I think the only same thing is that we’re the same four people.

Do you think you’ve stayed true to yourselves after all the success?

Scarlett: But not because of touring.

I guess you could just chalk that up to a natural maturing, from 18 to 23 you do change a whole lot.

Jordi: Yeah, but I feel like we have been a bit different from our touring, we spent a lot of time on the road as 18, 19-year-olds. But I guess the flip side of it is we have been able to see a lot of things other people wouldn’t have at that age. I think you learn how to look after yourself when you’re on tour because no one’s really looking after you.

Josh: Yeah you do learn to look after yourself – do your own washing, find your own food.

Jordi: As opposed to being fed at home (laughs).

Do you still get nervous before gigs?

Jordi: I get nervous when my voice is a bit shitty which it is a little bit now – I hate that.

Josh: I get nervous when we’re doing something I’m not really sure of or that I don’t know how to do 100 per cent.

That brings me to my next question, what are you more comfortable with – and what do you enjoy more – playing big festivals or small intimate gigs?

Scarlett: They’re both good, they both have their merits.

Jordi: Both great fun – I like a bit of contrast with everything. Pub show, big festival, change it up.

How do you unwind from the music – what’s your go to activity to just switch off from it all and refresh?

Josh: Just get on with life really.

Jordi: Yeah it’s really good to just get home and get your life into order because usually when you’re on the road you’ll come up with all these plans about what you’re going to do when you get home and then you have all this stuff you need to get done.

Do you still hang out with the people you used to chill with in high school before all this exploded?

Josh: Yeah we do.

Jordi: We do, I haven’t got that many friends I hang out with from high school – I’ve got a few.

Jordi: I didn’t go to high school with Harry.

Jordi: We’ve talked about this before – friendships are hard to maintain, you need to put a lot of effort in to be like ‘I’m back! Let’s catch up!’ because otherwise everyone just thinks you’re always away and you don’t get invited to things. So it is something that you need to put effort into to keep those friendships there.

How do you prepare for gigs? Any rituals?

Josh: It changes every time.

Scarlett: We have a group dance session.

Josh: Those gigs where we have a dance session are usually pretty good.

Jordi: The dance sessions go off. At one gig we had a huge back stage which even had a PA in it and we were just cranking some badass beats, some crazy dancing going down – it was actually a bit more crazy than the gig we then played. The gig was a bit of a flop actually.

Scarlett: It was in a little country town – we were so pumped and then there was like 40 people at the show.

So the crowd’s energy is definitely an important factor:

Scarlett: So important. You could be so hyped up and then go on stage and if the people just aren’t pumped… but then there’s the other side of it where we could be a bit flat and the crowd’s energy lifts us.

David Allegretti is a third-year journalism student at La Trobe University. You can follow him on Twitter: @davidallegretti