If Bernie Sanders is a chance to win the Democratic nomination for the 2016 election, he'll need to win the vote in New York, Cait Kelly reports. 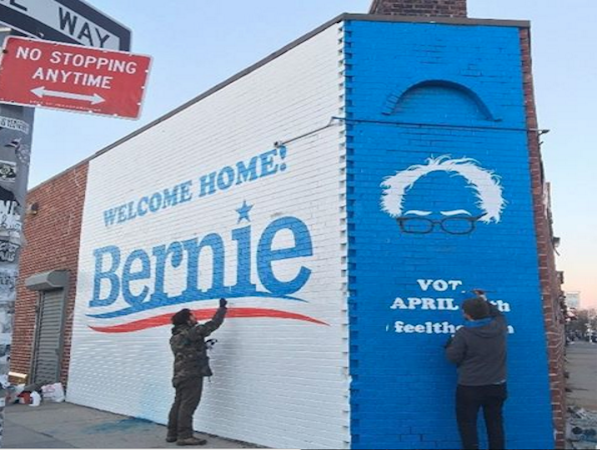 Presidential hopeful Bernie Sanders has managed to take seven out of the last eight democratic primaries, leaving him in serious contention with Hillary Clinton for the democratic nomination.

All eyes are now on the upcoming New York primary, which could very well decide the fate of Sander’s socialist style salvation.

Winning the nomination is all about having the delegate numbers. In July, delegates will represent their state at the national convention and vote for the nominee their people have chosen to pitch their hopes behind.

Super delegates (or party elites) are also granted a free vote and make up 714 of the final tally.

For the Democrats, just over 50% (2,383) of both free and pledged voting delegates are needed to secure a successful nomination.

As the numbers stand, Hillary Clinton holds 1,289 votes whilst Sanders has picked up 1,036. In the next week, a total of six states will vote, with over 750 delegates at stake.

Dr Thomas Adams, who lectures on American politics the University of Sydney and is currently in New York following the Sanders campaign, highlighted the importance of a win in the state.

“I think if he can win in New York, that pretty much changes the dynamic,” Adams tells upstart.

“If he is able to win by fifty-one in her adopted home state he’ll cut her delegate lead to about 150. I think at that point, there starts to be major questions about her electability.”

Adams says that a win in New York will create a snowball effect to other states.

“If he wins New York, its arguable that its pretty wide open at that point, it’s likely that he will win Pennsylvania,” he says.

“Then he’ll probably do pretty well in New Jersey and at that point he’ll really cut her delegate lead down. That makes California the final battle ground.”

According to polls Clinton still has a 10% lead in her home state of New York, leaving some analysts unconvinced that Sanders can snag the nomination.

“The opportunities for Sanders to actually muster the delegates at this point, it’s not impossible but I think it’s becoming more and more untenable and it will become more so as we get closer to the convention,” Lynch tells upstart.

According to Lynch, Sanders’ novelty can’t hold up.

“For the same reasons Trump will be turned down, he has no political executive experience; I think is the same problem is one that will dog Sanders.”

Lynch feels that rather than Sanders winning, Clinton would have to lose.

“He needs a combination of things to happen, he needs an event some major slip up that Hilary would make, I cant see where this would come from because she’s disciplined to the point of being enervating,” he says.

“But if she would be charged with criminal offences around the email scandal which has dogged her for the last two years, that might alter the perception.”

Sanders’ campaign is also struggling to capture the non-white vote, with Clinton proving far more attractive in that demographic.

In the twenty-one states that have now released exit-poll results, Sanders has managed to capture 50% of the non-white vote in only one.

According to Adams, Sanders’ inability to capture this vote is a serious issue.

“The big question in New York will be what kind of percentage of African American votes is he going to get, because he’s going to lose quite badly amongst wealthier white New York suburbs as well as wealthy whites in Manhattan,” he says.

He adds that New York is unique in the sense that the African American population is far more diverse, a factor that could actually be advantageous for Sanders.

“New York is not a place where socialism is necessarily a bad thing, at least amongst the people he is trying to court,” he says.

“Even more so than the midwestern cities, it’s an African American population which is quite diverse and also has a long history and diverse history with a variety of political candidates.”

Voters themselves have a range of different views.

“I like Sanders and agree with most of his policies,” says Emily Nahmanson, a Californian based Democrat who plans on voting for Clinton in the primary.

“People who run for President need a majority of all voters, not just progressives. I am supporting Clinton in the primary but will vote for Sanders for President if he gets the nomination,” she tells upstart.

However, Jackie Crivinar, who will also vote in the Californian primary believes he may be in with a chance.

“Obama proved that a long shot can win… twice! When Obama and Hillary were fighting for the nomination, a poll showed that blue-collar workers would vote for a black man before they would vote for a woman,” she tells upstart.

“Let’s hope that America has evolved.”

And if he does win the nomination?

Current polls suggest that if Sanders gets the nomination he will most likely be the next President. Paired with Donald Trump, Ted Cruz and John Kasich in hypothetical match ups, Sanders has come out on top. This is an advantage he has over Clinton.

To get there though, Sander’s fiery populism has to pass through the next nineteen states. Whilst he may be closing the gap, if he can’t make it in New York, he’ll struggle to get the nomination.