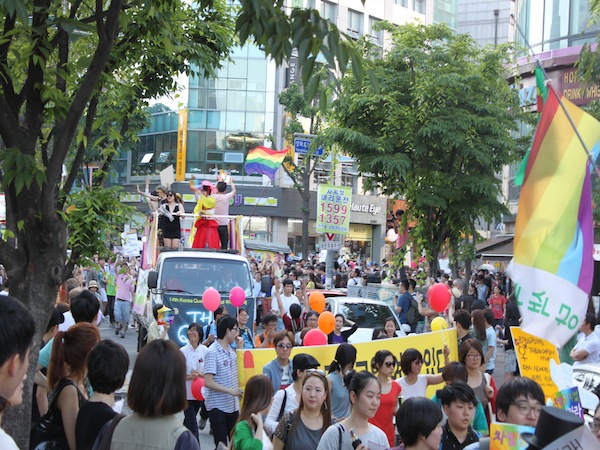 The 14th Annual South Korean Pride, (officially the Korea Queer Cultural Festival) kicked off on Saturday the first of June in Seoul with a parade and festival attended by over 10, 000 people. In addition, a week-long Seoul LGBT Film Festival was held.

1000 participants marched through and around Hongdae, a central area of Seoul known for its indie spirit and urban arts features, despite South Korea being considered one of the most conservative countries in the Asian region. Although plenty of Kylie and Madonna tunes blaring from portable speakers throughout the parade, Gangnam Style was not heard once.

Interesting indeed, given Psy’s All the Single Ladies’ cover while dressed in a bright-red leotard at his Seoul concert in April raised many eyebrows across the globe.

With favourable temperatures in excess of 26 degrees and blue skies abundant, there was a noticeable absence of bums, boobs and underwear-only participants which resulted in the parade being more of a hot shoe shuffle.  When asked why this might have been the case, 26 year old Jong, a university student, event committee member and parade participant said that Koreans were “shy about their bodies and only felt comfortable flashing their bits if they felt they were extremely good looking”.

The festival itself featured approximately 30 different organisations that ran booths.  From religious and human rights organisations to sex worker and youth groups, event organisers said this year’s event was the biggest yet in terms of participants, booths and floats. 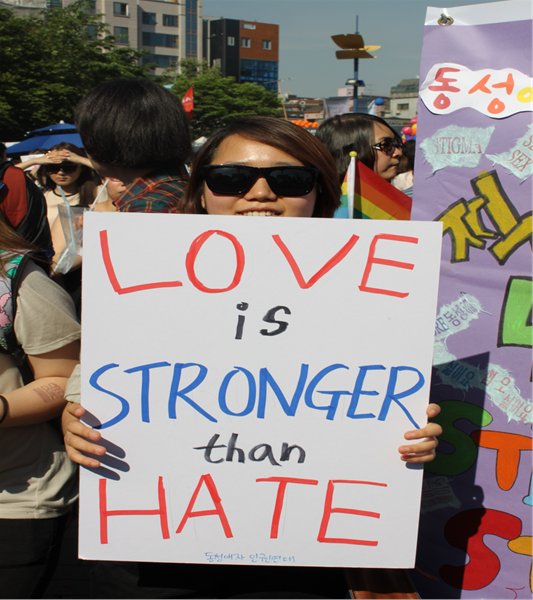 A 40 year-old South African ex-pat who did not wish to be named spent most of the day at a Community Church booth and said that each year more foreigners attended and participated in the festival with this year being his fourth and biggest ever for the church he was representing.

The event has not always been smooth sailing; in recent years, anti-gay protesters have turned up to the parade and published unauthorised photos of participants on various gay-hate websites. A lack of government support and sponsor related funding has resulted in the festival almost going bankrupt on a number of occasions. The event is 100 percent privately funded at present.

Despite the overall success of this year’s festival and absence of protesters, it seems South Korea’s conservatism is still very noticeable with a number of Government departments distancing themselves from the event when contacted for comment.

“Currently we are not supporting or sponsoring the festival but at the same time we have no reason to restrict diversity,” said Lauren Suk, a press representative for the Seoul Metropolitan Government.

When asked if there had been any complaints about this year’s festival, Suk said “there have been no complaints received about the festival/parade at this moment”.

The festival continues this week with a number of satellite events and, of course, the queer film festival, which will run all week.

More information can be found here in Korean and English.