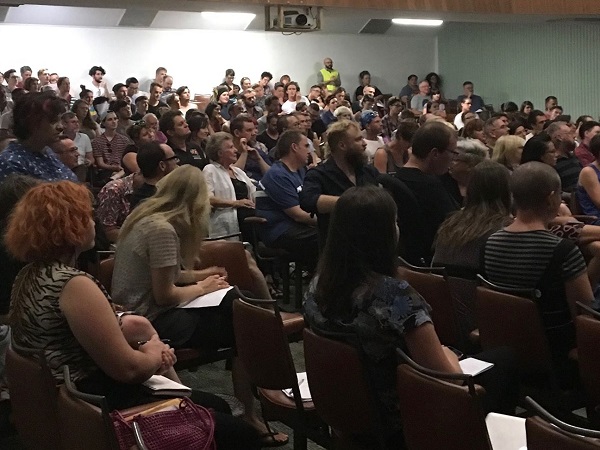 More than 250 people from Melbourne’s queer community came together at Trades Hall on Wednesday night to rally against the push to disassemble the Safe Schools Coalition Program (SSCP).

The meeting came after a week of heated debate surrounding the national program, which aims to promote acceptance of same sex attracted, intersex and gender diverse youth.

Following last weeks announcement by Prime Minister Malcolm Turnbull that an investigation would be conducted into the program, conservative group the Australian Christian Lobby (ACL) have launched a campaign against the program claiming it is “anything but safe.” 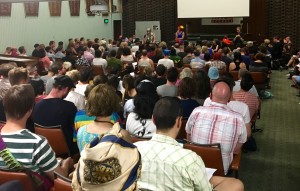 Aaron Hasting, a volunteer on the night, said the community needs to unite against the ACL’s campaign.

“I think we have to take them (the ACL) seriously because they are very good at what they do, which is political lobbying and good connections. It’s important to remember they’re not representative of the majority view in this country. So I think we can absolutely mobilise against them,” Hasting told upstart.

The $8 million program has been running nationally since 2013 with 517 member schools across Australia now participating.

The ACL says on their website that the program “contains graphic descriptions of alternative sexual practices” and claims that children are encouraged  to try them because they’re “fun”. They have been highly critical of the program.

They have been joined by conservative MPs such as Cory Bernardi, who has argued that the program “bullies heterosexual children”.

Event MC and transgender advocate Starlady, stressed the importance of the meeting.

“I think our community needed a space to come together and take back our power, respond to all the transphobia, biphobia and homophobia that’s in the media at the moment,” she told upstart.

The meeting was informal, with a diverse number of grassroots organisations, theatre troupes, parents and queer activists speaking on behalf of their groups or sharing their personal stories.

Representatives of major political parties weren’t present. However, Victoria’s gender and sexuality commissioner, Rowena Allen did take a moment to address the crowd and offer her support. 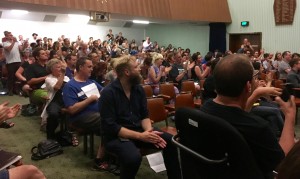 Although emotions ran high throughout the evening, the mood in the room was supportive. Organisers emphasised community solidarity and the need to combat the ACL’s campaign.

Many of the speakers argued that this debate uses young queer youth as cannon fodder for a broader attack on the community. They expressed dismay that the fight for equality had moved its trenches into classrooms.

“These attacks on our kids, on our people, is a sustained attack we will have to put up with for the next six months and we need to channel our anger into something that will be productive and positive,” one of the event organisers said as the meeting opened.

The tactics discussed to combat the anti-safe schools campaign were traditional in nature, with suggestions to write to members of parliament, local high schools and start discussions over social media.

George Munro, who works as a counsellor for queer students at La Trobe University, highlighted the importance of bringing the community together.

“It was really important to give the young queers who are struggling the narrative that they can fight back, that they can create positive change against the hate that’s been spat over the last couple of weeks,” they said.

Safe schools activist Roz Ward closed the meeting with a message of positivity.

“Amongst all of the hate mail and spam, we’ve had so much love and support and positive messages and tonight is amazing. Thank you for your ongoing solidarity.”

Cait Kelly is a third year journalism student at La Trobe University. You can tweet at her here: @caitkelly1