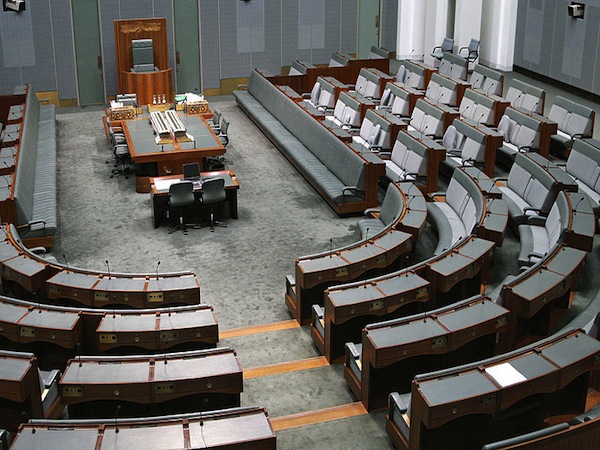 The message, though, did not reach all the MP by 2pm on the last sitting day in the House of Representatives. As Question Time commenced, Tony Abbott was quick off the mark to ask the most reasonable question of the afternoon: will Kevin Rudd explain what happened the night before and give an election date.

The response came with three years of practice. There was no stammering, hands fell onto the dispatch box where they had rested before. There was a new (old) leader. His time spent in the “nether regions” allowed Rudd the time to iron out any kinks in his address.

However, parliament itself maintained the tricks and tantrums the leader before had encountered. Question Time of late has been a mix of Dorothy Dixers and attacks on MPs. The one thing missing in the House of Representatives has been a political debate.

A remarkable QT: press gallery packed with over 60 journos; Julia & several ex-Ministers sitting down the back like a government in exile.

On Wednesday, leadership speculation was rife, and the House, Press Gallery and Viewing Gallery found themselves at capacity. The morning’s events had left the sinking feeling that Question Time was going to be big: perhaps the Prime Minister calling a ballot in the Labor caucus, maybe The Opposition putting in a motion of no confidence. In reality, Question Time was tame.

Thursday, the story was much the same. The delay in announcing the results of the ballot the day before must’ve meant the Coalition didn’t have the time to work out a considered plan for the next day’s proceedings. The late night meant the questions posed to the Prime Minister asked about trust.

Despite how he may be portrayed by the media, Kevin Rudd is a man of the people. Thursday’s hour-long Question Time gave him the chance to tell the Australian people that he is the same man. Personality? Yes. Policy? Not so much.

But, as Rudd remarked, there is no dialogue: “all we get here is politics, politics, politics—the old politics of simply negative interjections and invective as opposed to building a constructive argument for one vision for Australia’s future.”

No mater how much Question Time was, in fact, not questions but prompting statements, Kevin Rudd made one comment that will see the Australian people through.

“I say to the Leader of the Opposition that if we are having a serious debate in this country about asylum seekers then it should be a debate about policies which work, as opposed to slogans which sound good.”

The jury is still out on whether Rudd will be a successful PM. However, one thing is known: blaming the previous government will not sustain an Abbott-led government for three years.