My first real boyfriend was one of the coolest kids in school. He played guitar and sang in a band and was just plain dreamy. But when he started getting pimples and his voice broke, he suddenly became less appealing to me. Of course I was too scared to do it in person, so instead just sent him a polite ‘you’re dumped’ via MSN messenger. 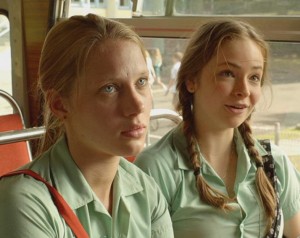 This trip down memory lane was sparked by the release of the first episode of the teenage drama Puberty Blues, where dumping your boyfriend for not being ‘cool enough’ is second nature.

The series is a remake of the 1981 film, based on the 1979 novel by Gabrielle Carey and Kathy Lette. The movie is a ’70s icon, representing the youth of Australia’s central coast.

Even though the story has already hit the screens once, it’s easy to see why this novel, turned movie, turned TV series has been released again and again. Even though the fashion, technology and slang may have changed since the ’70s, the issues and attitudes of teenage girls has remained the same, making it a timeless classic.

The first episode starts off introducing Debbie (Ashleigh Cummings) and her family who appear as your typical, traditional, conservative family. It then switches to Sue’s (Brenna Harding) family where her free-loving, care-free parents provide an interesting comparison. Both girls find their parents traits annoying, rolling their eyes and complaining about ‘how embarrassing’ they are despite their polar opposites.

Oh to be a moody teenager again.

It doesn’t take long for the terms ‘pash me off’, ‘no way moll’ and ‘you’re dropped’ to appear in the dialogue, taking those familiar with the story way back.  Although this may not be the slang used by youth today, it still represents those awkward teenage years where we all seemed to get mixed up between what is right, what is wrong and what is cool.

The series has decided to stick with the setting of the 1970s instead of attempting to turn it into a modern adaptation, which is proving to be a smart move. The ’70s setting provides unique viewing to our screens and is a refreshing change from the reality dribble that is constantly invading (it was aired straight after an episode of The Shire which provided an enlightening contrast). But the reason the Puberty Blues story remains timeless is the universal challenge that teenage girls seem to face, with trying to become a part of ‘the cool group’.

As Debbie and Sue try their hardest to impress their classmates, you can’t help but to think back to the times when you would do stupid things to seem cooler.

Like wearing a summer dress to school in the middle of winter… no, just me?

Trivial issues like pimples, boyfriends and periods provide a humorous undertone to the girls journey. These issues are something almost every teenage girl experiences and no matter how the story is told, our first ‘love’ is often ended with a simple ‘your dropped’ or in my case ‘your dumped’ and generally always second hand. Nowadays the ‘your dropped’ may come via text message or Facebook chat, but either way the basic structure of a girls journey through teenage-hood remains fairly similar.

The series also hasn’t wasted any time introducing the more serious and darker issues of teenage-hood. Within the first episode, sexual assault, drugs, adultery and child abuse are introduced into the story line. It is sad to note that although many things have changed since the ’70s these problems are still very much alive and can affect more then just teenagers. It will be interesting to see how the story line will unfold and the details that will be added in by the TV show in contrast to the movie.

The bottom line is that although the era may have changed, Puberty Blues will always remain a classic and forever teach young teenage girls invaluable life lessons. The reason it was and remains so popular is that whether it’s already happened or about to, almost every teenage girl can relate to at least one or more of the issues in the lives of Debbie and Sue. They will always remain as the two girls that helped us through our puberty blues.