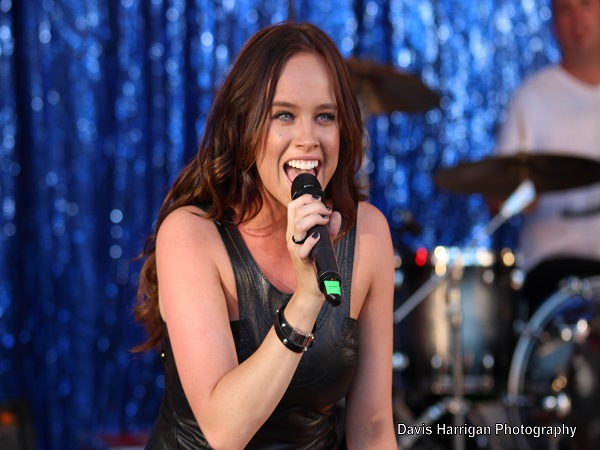 In 2007, Bonnie Anderson performed on the inaugural edition of Australia’s Got Talent (AGT). Her audition song, James Taylor’s Fire & Rain, had the entire audience standing up and applauding.

The journey could have ended abruptly on stage. However, judges Danni Minogue and Tom Burlinson voted Anderson through to the second round. A few weeks later, and she was crowned the winner of the first season.

Auditioning for Australia’s Got Talent spurned from performing at a local show, says Anderson.

“To be honest, when I auditioned for AGT I did not know what I was in for. A lady who asked me to audition for the show approached me in my hometown at Christmas Carols I sang at every year.”

Going on, the opportunity was all about the singing, while the audience was simply there.

“I wasn’t worried about the audience, I was more excited to sing for the people.  That was my dream from a very young age, and all I wanted to do,” she says.

Since that tense April month more than seven years ago, Anderson’s career has progressed at a rapid pace. Her fan base has grown by the thousands in the last 18 months.

Rather than rush into a record deal straight after the show, Anderson went back to her school life after AGT finished.

“It was a difficult time for me because it was so exciting,” says Anderson.

“I had labels and management approaching me, but I wasn’t ready to take that next step being so young.”

Anderson wanted to find herself as a singer before she jumped at a contract, and develop as an artist and person.

“I have wanted to be a singer since I was young, and wanted a long career in music, so I wanted to do it the hard way. Grow up, be a kid for a while; write songs, learn a bit of piano, and play gigs. I wanted to be ready.”

Friends at school welcomed Bonnie back to the fold with open arms, and the euphoria and fame of performing on national television fazed no-one.

“My good friends never treated me any different, and teachers definitely didn’t,” says Anderson, cracking a smile, “I still had to do my homework.”

Career experience is something Anderson is certainly not short of. Having toured as a support to the likes of Jimmy Barnes and Diesel, Anderson sings praise for their hard work with her.

“Jimmy has been so awesome and supportive…I went to New Zealand with him and all around Australia, I learnt so much from him. It was incredible to share the stage with such an Australian icon,” she explains.

With the support of her family, and plenty of singing genes, Anderson loves being around the home, but music will not stop for anyone.

“Because my Mum was in a band I have been around music since I was born. My god father, (world champion boxer) Lionel Rose, also made records back in his day,” she says.

One highlight that sticks in Anderson’s mind is the release of her first EP, in 2010. Just five songs long, the emotions still live strong when performing one particular song.

“I still sing one song I wrote on there at nearly every show, “What Makes You Think.” I wrote the song when I was 13 about a close friend of mine, growing up and finding yourself. It’s really special to me, and people connect well with it.”

Having opened for Australian musicians such as Shannon Noll and Rob Farnham in recent times, the important break and development came last year, with the release of Raise the Bar, and a tour supporting English singer Olly Murs around Australia.

Breaking onto radio was another important step, as well as signing to Sony Music, but the tour helped bolster the already established fan base.

“It was an incredible introduction to who I am now,” says Anderson, a grin forming.

“Touring with Olly Murs after releasing my debut single was really awesome.  It allowed me to interact with my audience and for people to get to know me a little more.”

Anderson has been lucky enough to work with DNA, well-renowned around Australia as song-writing and production experts who have worked with international superstars.

“I learn a lot in every song writing session. Every session is completely different, I love working with other people while writing because the individuals own experiences help create the magic of a song,” says Anderson.

Many might envy her touring around Australia and releasing hits and playing gigs to loud crowds, but with many more possibilities on the horizon, Bonnie will only raise the bar even higher.

Davis Harrigan is a third-year Bachelor of Journalism (Sport) student at La Trobe University. Follow him on Twitter @Davis_Harr.