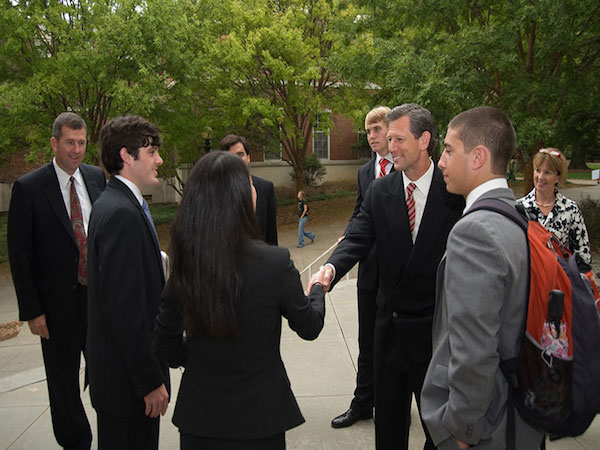 The Conversation said there are nearly twice as many full-time students enrolled in university study as there were in 1996.

While university numbers are rising, the number of graduates who are successfully securing jobs is not.

Last year, The Australian Financial Review reported that two-thirds of university graduates in some courses were failing to find a job within the first four months after completing their degree.

While there are extraneous factors that affect rates of graduate employment, such as restructuring and the offshoring of jobs, the implementation of compulsory internships could help graduates secure jobs.

Potential employers look favourably at those who have completed real world internships and who have had experience.

“Alarm bells go off with employers when they look at someone who gets high distinctions on their transcript, but doesn’t have any form of work experience,” GradConnection Director Mike Casey said in the Sydney Morning Herald.

Most university courses provide opportunities for students to undertake professional experience but it is often not compulsory, meaning students can graduate without doing any placements in the area they have studied.

University degrees in the teaching, science and medical fields nearly always have compulsory placements. However, the arts sector at many universities does not.

Dr Mike Brown, Senior Lecturer in Education at La Trobe University, says: “While university courses are good for learning content-specific knowledge, or propositional knowledge, this needs to be developed and fine tuned through immersion in contexts, relationships and environments where the knowledge is utilised and enacted.”

As it stands, it’s often up to a student to use their own initiative to secure a professional work placement.

Aubrey Hamlett created My Interning Life (MIL), a website and social media account for interns and created by interns, as part of a university assignment.

MIL is designed to encourage university students who have not done work experience to get involved. It provides practical advice for those who are looking to do, or are doing, internships in the media and communications field, and showcases stories from student interns.

“You would have to be very confident in your skills if you didn’t have some internship or work experience on your resume at the time of graduation,” Hamlett tells upstart.

Hamlett completed various internships during her studies. These included placements at Melbourne Storm, Universal Music Australia and Cosmopolitan Magazine, which helped her determine where she wanted to take her career after university.

“I would encourage all students to take on about three internships in varied areas and job descriptions to help them find out what they truly can see themselves doing and will love as a career.

“My internships and social media profile helped me stand out in the graduate pack as my resume already had that real-world experience and knowledge of how a workplace operates.

“It also showed that I was a self-starter and determined to gain as much real life experience that I could while still studying,” she says.

She says that internships greatly benefit students job prospects as they help to establish contacts for future employment.

“In terms of media and communications, it’s already a competitive field, so you have to think of ways to stand out and gain real work experience. Internships will also help forge mentorships and references on your resume,” Hamlett says.

From a business perspective, interns can provide depth and new external insight for companies. Unpaid working agreements are often arranged, meaning businesses aren’t out of pocket.

However, on the MIL website, Hamlett says to make sure mutual employment arrangements are agreed upon and understood by both parties, to ensure interns aren’t being unfairly treated.

The Australian Financial Review highlighted the correlation between the job success rates and the university the students graduate from.

An important point to note is that The University of Sydney requires an internship to make up compulsory credit points. The University of Tasmania does not state anything about internships in their study guide, which may explain the variation in employment rates.

More connections and partnerships between businesses and universities will help graduates become more skilled, confident and job-ready. Like Hamlett suggests, internships may help students beat the odds and gain employment straight after graduating.