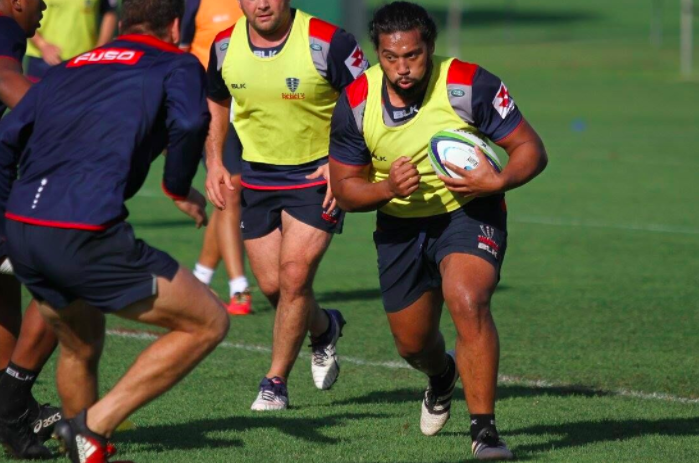 Fereti Sa’aga is one of the latest up and comers of the Melbourne Rebels, but for the 22-year-old prop, it’s his off-field life that sets him aside from the rest of his team.

Unlike other young players on the team that might go home and be looked after by their family, Sa’aga has been taking on responsibility for his own from a young age.

“During school, I had my first kid… I was seventeen. So yeah, my rugby was doing this,” Sa’aga says, indicating an upward progression with his arm.

“[My partner] was just like ‘I can do this on my own’, because she knew what was going on with my rugby.”

“She was willing to sacrifice her life and say that she didn’t know who the dad was…and being the young kid I was I just said, ‘yeah do that’.”

But Sa’aga quickly realised he wasn’t ready to miss out on the opportunity of raising a child, and strengthened his relationship with his partner, and new daughter.

“So that was actually not my downfall, I reckon it was what really defined me as a rugby player, because it sort of gave me a sense of the outside world as well and the outside pressures,” he said.

Sa’aga and his fiancé now have three children together, a four-year-old daughter and two boys, aged three and one.

And in 2017, his rugby career has taken off again. With the senior Rebels players injured, Sa’aga has made his Super Rugby debut for the Melbourne Rebels.

It’s the highpoint in a rugby career that started seriously when he made the Under12s Victorian team. At the age of 17, Sa’aga made the Australian Under20s team and in 2015 competed in the World Rugby U20s Championship which took place in Italy that year.

“When people started saying how good I was, I was like ‘oh cool’ and started using that as fuel. Like oh man I could take this somewhere,” he said.

However the first few years in the Rebels development squad weren’t easy, as he juggled work and training.

“All the kids would go home to their parents and get a nice meal and I had to go to work. I used to work down in Torquay doing disability work, and then have to rush back for training and then go see [my partner] and try and find out where I can get the next job or the next lot of money to try and keep us together.”

The young player credits his family for his position today.

“They’re what kept me driven pretty much. I’ve got a lot of things to give them because they have driven me to get to here. And here is good,” says Sa’aga with a laugh. 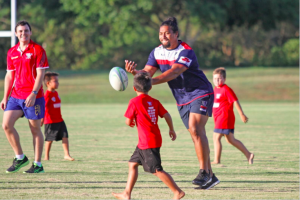 Sa’aga’s wider family are also enjoying his Rebels journey. As a local Melbourne product, he noted he often resorts to pestering Rebels teammates for spare tickets to ensure he can get them all into the games.

“Most of the boys are from interstate so they’ve only got like max six people coming to the games. When I get my tickets you’re only allowed like four and then I have to go back and ask for an extra twenty or thirty,” Sa’aga said.

“They’re all just scratching their heads and I’m just like ‘aw mate c’mon, like I can’t say no to them’. So I need all the tickets, it’s just embarrassing. Every week, every week! I’m walking in there like putting my hands up and they just shake their heads so I’m like ‘yeah sweet’. But they love coming.”

Despite everything the Rebels’ prop has endured, it’s unsurprising that Sa’aga is humble, down-to-earth and light hearted. He constantly shows gratitude for all the simple things in his life that have gotten him to where he is today, and credits his faith for helping him keep his life on track.

“Last November… I had the smallest minimum contract, wasn’t really paying the bills or anything, I was just in a bad place with my kids and with my partner,” says Sa’aga.

“But as soon as I found God in November, everything has just sort of taken off.

“He’s another main reason as to why I’m still here, probably the biggest as well.”

Hannah Matchett is a second year Bachelor of Media and Communication (Journalism) student at La Trobe University. You can follow her on Twitter here: @matchett_hannah

Kristina Colina is a second-year student in the Bachelor of Media and Communication (Sport) at La Trobe University. You can follow her on Twitter: @kristinacolina1