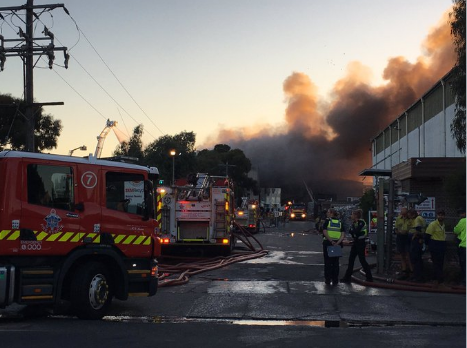 Factory fire in Melbourne’s north declared under control after MFB issue warning at 6.40am.

Around 100 employees were safely evacuated from the SKM Recycling Plant before relief crew arrived at the scene.

130 fire fighters and at least 30 trucks from the Metropolitan Fire Brigade and Country Fire Authority battled the blaze that started just before 3.30am this morning, finishing after 8am.

Huge clouds of toxic black smoke were seen right across Melbourne as MFB Assistant Chief Martin Braid asked for people to “stay away from the area”.

In an interview with the ABC, Mr.Braid described the five hour-long battle as “very intense.”

The SKM factory was rebuilt only a few years ago following another fire that burnt the Coolaroo recycling plant to the ground in 2011.

“As you can imagine, it’s a recycling plant, so there’s lots of paper, lots of plastic, which is highly combustible,” Mr Braid said to The Age.

Ambulance Victoria issued a community health warning for Coolaroo and it’s surrounding areas for smoke inhalation early Tuesday morning, before being downgraded at around 11am.

The safety instructions from Vic Emergency are urging people with pre existing respiratory problems to continue to monitor their condition.

Four hours into the fire, the blaze has been upgraded. There are now 30 trucks and 120 firies at #Coolaroo @7NewsMelbourne pic.twitter.com/hA9QEbgaYB