After nearly a decade in detention, refugees in immigration detention could be detained for the rest of their lives. 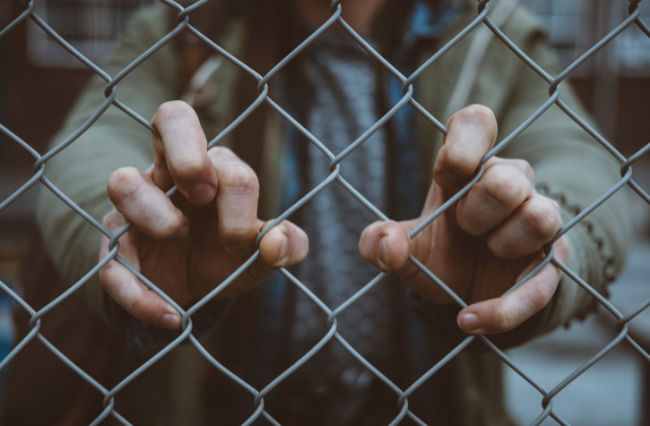 “When I when I arrived in Australia, I was so happy. I thought to myself ‘Hamid it’s over. Your new life is coming, and you can live’. But it wasn’t so,” ex-refugee, Hamid, tells upstart.

Hamid arrived in Darwin by boat in 2013 and was held in offshore detention at Manus Island for many years. One day it became too much, and he took “too many sleeping tablets”, forcing the Australian government to bring him to Australia for medical treatment where he was held in hotel detention for more than two years. Hamid says that his experience in hotel detention was more akin to torture than treatment.

“It’s so much harder than Manus Island. And we wrote requests that we wanted to go back to Manus Island,” Hamid says.

Being confined to a hotel room for years on end took a toll, and Hamid says that nights and days blurred into a constant exhausting sameness. But he says the worst part of hotel detention was the never knowing when would be free, with no avenue for relief.

For almost a decade, Australia has maintained a policy of mandatory detention for asylum seekers and refugees. The current average period of immigration detention in Australia is 668 days, according to the Refugee Council, but many refugees have spent nearly a decade imprisoned.

However, on 13 May 2021 the Australian Government passed the Migration Amendment Bill, which Immigration Minster Alex Hawke said would promote human rights and strengthen refugee law to prevent deportation to the country they fled from.

But human rights advocates like Dr Carolyn Graydon, principal solicitor at the Asylum Seeker Resource Centre, have expressed concern that the law gives the immigration minister the unchallengeable power to withdraw recognised refugee status. And because they cannot be deported, it essentially means they can spend the rest of their lives in immigration detention.

“There’s then no legal mechanism really, to get them out. And so, we’ve had some clients that have been detained – seven, eight, even nine years – which constitutes arbitrary detention, and it’s unlawful in international law,” she tells upstart.

This is what’s called ‘administrative detention”. This is completely different from criminal detention, with courts regularly reviewing the conditions of incarceration. Dr Graydon says that people in immigration detention have no way of being released unless the minister personally exercises a non-compellable power to release them, based on exceptional circumstances.

“Unlike a sentenced prisoner, who knows how long their sentence is and who has some idea of what the future holds, [refugees] are just left in an indefinite limbo,” Dr Graydon says. “The minister doesn’t even have to respond to a request for relief.”

The law also means that any refugee without a visa, or who have had visas cancelled, can be detained indefinitely, with the government also having the power to delay or cancel a refugee visa. The government’s explanatory statement says the law gives the minister oversight to protect human rights.

According to Dr Graydon, this constitutes a breach of the International Covenant on Civil and Political Rights (ICCPR) that prohibits arbitrary detention. She says Australian immigration detention has already been found to be in breach of this article around 100 times, and several other international human rights treaties, by various UN committees.

“The idea that you just leave someone to rot in detention year in year out without any recourse to a court is a really authoritarian structure of law,” she says.

The Australian Government has rejected calls by member states of the UN to amend mandatory immigration laws  to comply with the ICCPR, most notably rejecting calls to abolish the detention of children.

Hamid was recognised as a refugee in 2015 when he was in Manus Island detention. He was only able to apply for resettlement in America in 2017—where he now resides—four years after arriving in Australia.

Even though he is now free, he says that the psychological trauma from almost a decade of arbitrary detention has destroyed his quality of life forever. Hamid still has nightmares about being woken up every morning at seven o’clock to a guard shining a light in his face.

“The best times in my life are already gone, in Australian detention.”

Hamid says his mind is also frequently on his friends who are still suffering in detention. Kasra Mirabi, a refugee currently detained at Park Hotel in Melbourne, has been in hotel detention since he was medevac’d in 2019. Since arriving in 2013, he has also been detained in the Manus Island and Christmas Island offshore detention facilities.

“It’s now eight years – almost nine years – that I’m in detention without any crime, and we are suffering from mental issues. And personally, I don’t think I will ever get better,” he says. “Some of the damage that has happened to us is never going to heal, never and ever. We will have this damage forever in our life.”

Mirabi has had no indication of a time frame for his freedom. Some refugees are waiting to resettle overseas. However, this process takes years. In the meantime, they are left in limbo.

“I became a refugee in 2018. And now, three years later I am still in detention, and they haven’t given me my freedom – even though I am a refugee, I don’t know why,” Mirabi says.

“As a consequence of that complete lack of legal oversight of immigration detention, many people say that they would much rather be in the ordinary criminal justice system, or in prison, rather than being in immigration detention centres, where on many fronts, the conditions are far worse [than prison] and unregulated,” she says.

According to Mirabi, the refugees are pat searched regularly by security, every time before they are allowed outside, and their rooms are searched regularly. Whenever he leaves the hotel for a doctor’s appointment, he says he is humiliated in public, escorted with both arms restrained by security guards “like a criminal”.

“People look at us like criminals and they ask ‘what have they done that they hold their hands’ – both of our hands! It’s really inhumane treatment for somebody to do to someone else,” Mirabi says.

Some refugees in hotel detention in Brisbane that came to Sydney to interview for resettlement in the US were handcuffed during the flight. 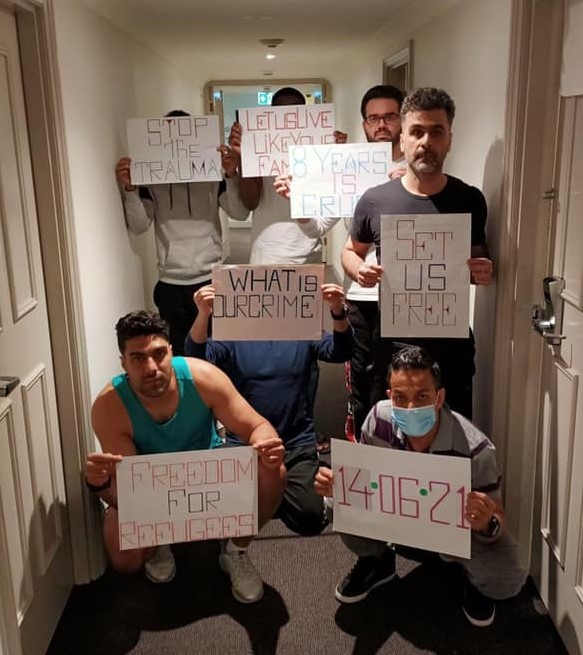 Refugees peacefully protest in Park Hotel by Our_V_O_I_C_E on Facebook.

The only thing that the refugees in hotel detention can do to protest their situation, according to Mirabi, is hunger strike or perform “little protests”, like hanging signs from the hotel balconies, or taking photos and sharing them through social media. But all their disobedience and non-compliance has consequences, he says.

“If you hunger strike, they might send you to the detention centre or move you to the restricted room in the centre where you don’t have any privacy and there is a camera even in the toilet or in the shower.”

But what really makes Mirabi suffer is watching people living a normal life while he is locked in hotel detention.

“Sometimes I see from the window that people are living a normal life, but I’m a normal person, without having done anything wrong,” he says.

“I am begging the Australian Government, please end this suffering. That is enough. Eight years is more than enough. Please release us to be free like every other human in the world.”

Photo: Person behind mesh fence by Mitchel Lensink is used under a creative commons licence and is available HERE. The image has been resized.

Article: Gianni Francis is a third-year Bachelor of Media and Communications (Journalism) student at La Trobe University. You can follow him @GianniFrancis6