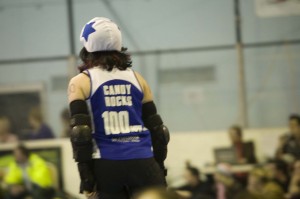 The atmosphere is electric with spectators packed to the crash zone lining the track’s edge. The crowd erupts with cheers as the skaters lap the track. ‘Misty Meaner!’ ‘Bustup Bamby!’ ‘Candy Rocks!’ Their names ring out, sounding sweet with a sinister twist, encompassing the heart of Roller Derby. As a testament to the sports’ uniqueness, the crowd is unlike a typical sports’ audience in that it appears a magnet for all personality types to converge. Like any sport, however, the crowd is intensely divided by their support for opposing teams.

The lively atmosphere reflects that this sport, which sees five female skaters from each team bashing their way around a flat-track, is experiencing a strong revival. The sport has gone through waves of popularity since its conception in 1930s USA. In 2007 The Victorian Roller Derby League (VRDL) formed and already possesses a devout following. Although many have yet to discover the derby world, be warned the wave is gaining momentum. In fact, a major motion picture dedicated to the derby, ‘Whip It’, hits American cinemas in October.

‘Candy Rocks’ had first witnessed “the best sport ever invented,” when she glimpsed the derby on TV several years ago. Unknown to her then was that only a few years later she would throw on some skates and experience the derby first-hand. Since joining the VRDL’s 2008 new intake, known in the industry as ‘fresh meat’, she has skated her way onto the ‘Dead Ringer Rosies’ and the all star ‘Big City Bruisers.’  She plays all positions, though especially loves jamming, the point-scoring player who receives the brunt of many bashes. If you have been to a bout you know this is not a game for the faint-hearted. The players skate with fierce determination using hip blocks to send each other slamming onto the track.

The names, daring outfits and slams have led some to believe that Roller Derby is like WWE on roller skates, however, Candy Rocks is quick to negate this perception. “WWE is a choreographed stage show and derby is a sport. It’s like comparing ‘Shane Warne The Musical’ to the Ashes. The VRDL train as athletes and play as athletes. Every bump and fall you see is real.”

Roller derby has attitude; the tattoos, fishnets and edgy style give the sport a sense of rawness. Candy Rocks explains that derby girls have a strong sense of individuality, demonstrated through uniform personalisation. Adopting an alias also adds personality as well as privacy that Candy Rocks appreciates. After joining the league, skaters choose a name that reflects their derby style. Candy Rocks wanted something “sweet but tough”.

With three training sessions every week that last a “sweaty two-to-three hours” toughness is mandatory. Many skaters have their own strenuous fitness regime in addition to the required sessions. “It is a physically demanding sport and you need to be fit to play your best.”

The commitments do not stop on the track. “People talk about eating, living and breathing derby.” Candy Rocks explains that “there is a grass roots nature to the sport which means a lot of the girls are volunteers on various committees that oversee things such as coaching, organising bouts, managing the league’s finances, media, merchandise, the list goes on!” Having a supportive workplace, partner and friends helps her to time-manage, however, she adds “There are some days when I’m so tired, I’ll thump you if you wake me up.”

How has becoming a derby girl influenced Candy Rocks?

“It’s made me stronger and tougher and I’ve made some great friends.” Derby girls appear born fierce and confident but Candy Rocks explains that the sport draws a variety of personalities but brings out confidence on and off the track while creating new friendships. “When you’re stepping out to play, you can trust on the support of some pretty awesome people.”

On the sport’s future she says, “I’d love to see roller derby in Oz regain the popularity it had back in the ’70s, where teams were skating in packed out arenas such as Festival Hall. It’s a fantastic sport for women and encourages really positive traits such as teamwork, strength and fitness, so it would be great to see more people getting their skates on and playing derby.”

Experience the intriguing world of roller derby by heading to the next bout or even better, as Candy Rocks advises, “register for our next ‘fresh meat’ intake, get some skates and start practicing!”

Carey Scheer is a first-year student at La Trobe University