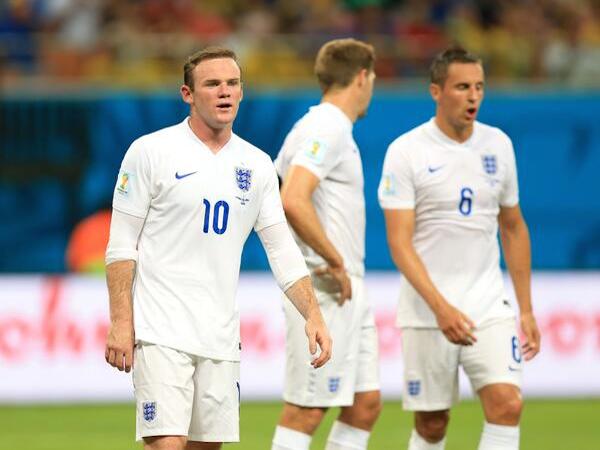 An England loss is always met in the same way and, following defeat to Italy in their World Cup opener, the post-mortem has already begun.

Subject to the most analysis, and perhaps the most criticism, has been Wayne Rooney.

A player of undoubted potential, Rooney has continually failed to live up to the hype on the world stage. It appears the World Cup in Brazil will prove no exception.

Provider of the cross for Daniel Sturridge’s equaliser on Sunday morning, Rooney did little else in a severely disappointing display.

Much of the debate prior to England’s match against Italy surrounded where the 28-year-old Manchester United forward would fit within the lineup.

Would it be as a central striker alongside Sturridge? Would it be behind him in an attacking midfield role? Or would he continue to play out wide, as he had done throughout the pre-tournament friendlies?

But yet hardly any mention was made of whether Rooney even merited a place in Roy Hodgson’s starting XI at all.

Should Rooney starts vs Uruguay? Here’s what you said on Twitter: http://t.co/qyjpTJKDA0 #ENG pic.twitter.com/YrO9QOOcMK

England has constantly been burdened by its own expectations. A supposed golden generation – if you can call it that – began in 2002, faltered in 2006 and came to an underwhelming conclusion in 2010. A series of problems, both on and off-field, constantly hampered what was supposed to be the nation’s golden era.

Now, with the likes of David Beckham, Ashley Cole, John Terry, Rio Ferdinand, Jamie Carragher and Michael Owen in retirement and with Frank Lampard on the peripheries, a new era was supposed to begin.

But will it again be weighed down by the endless English problem of picking players on reputation and expectation, rather than on merit?

While the aforementioned group have been and gone, Rooney was charged with the task of leading this new generation – made up by the likes of promising youngsters such as Raheem Sterling, Ross Barkley and Luke Shaw.

But is Rooney the right man for such a hopeful task?

After bursting onto the scene at Everton and continuing to shine in his earlier years at Old Trafford, his form has since plateaued.

Now, in Brazil, England is paying the cost for someone resembling a great enigma. But yet it seems as though another England manager doesn’t understand what appears the core problem of the team.

Instead, the England boss hinted at playing Rooney in the No.10 position for their next game against Uruguay, subsequently moving Sterling out wide.

Sterling himself even seems resigned to the fact he will be moved purely for Rooney’s benefit.

“I would be happy to play anywhere the manager puts me,” Sterling said yesterday.

“I will be working for the team regardless of the position I play in.”

But such a decision would only further stifle what is an exciting and raw talent, bursting at the seams to assert himself on the world stage.

Sterling’s performance against Italy, for someone of 19, was phenomenal. For Liverpool last season, he flourished in a central role and often went missing in wide positions.

To limit his impact in order to try and get more from a player who has had his numerous chances – and done little to prove he is worthy of another – would be suicidal.

Even Barkley, 20, has shown more promise in an impressive season at Everton to deserve the chance of being the face of England’s new generation.

Likewise in wide roles, where Alex Oxlade-Chamberlain, Adam Lallana and James Milner – all of which have undoubtedly shown better form than Rooney over the last 12 months – missed out on a place in England’s side against Italy to accommodate for the forward.

An attacking system, catering for the likes of Sturridge, Sterling, Barkley, Lallana and Oxlade-Chamberlain, is ready to be ceased by a bold manager.

The likes of Brendan Rodgers, Roberto Martinez, Mauricio Pochettino and Arsene Wenger have allowed such players to express themselves and have given them the freedom to make mistakes and learn from them.

The resulting benefits have been clear to see.

But, for an England side seemingly set to fall into the same mistakes that have plagued them for years, with a cautious and dour manager who knows no different, it could once again equate to the nation’s early exit from a major tournament.