Ozeer is a sports-loving lawyer who is shaping the lives of Melbourne’s refugees. 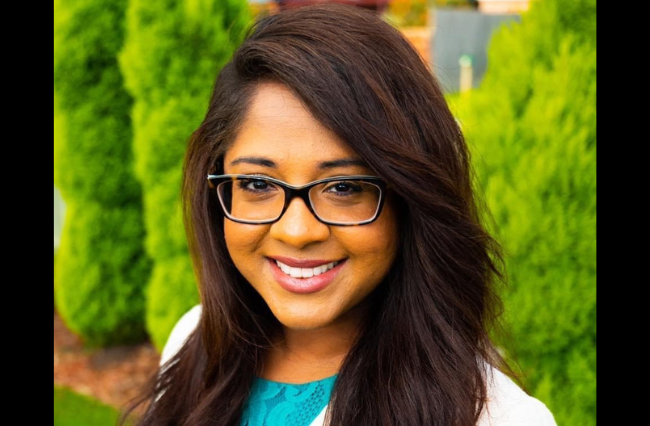 A few years ago, an international delegation came down to Australia to see what a small group of volunteers were doing to help refugees and migrants in Australia with their settlement process. So impressed were they by their efforts, the organisation was invited to speak at a UNHCR conference in Geneva, Switzerland, about all the amazing work of Bounce Refugee Youth Mentoring Program (Bounce),

Saarah Ozeer is a co-founder and director of Bounce, a program which helps refugee youth settle in their new communities through mentorship, skill-building workshops and community sport.

“The international community wants to learn even from a youth led organisation to see what innovative solutions and outcomes we are trying to come up with and so that was a really proud moment for our whole team,” she tells upstart.

On top of her work at Bounce, Ozeer is also a part of the Regional Advisory Council for the eastern metropolitan region at the Victorian Multicultural Commission. She also works on the Community Council on Ethnic Issues in the eastern region, and on another three different projects: Amplifying Voice in the Community, the Scams and Employment Project and the Engaging Communities Democracy Project.

Oh, and I almost forgot, Ozeer is an admitted lawyer.

When asked her story, she says, “Do you have a cup of tea handy?”

Ozeer was born in Sri Lanka as a Moor, a minority ethnic group in the island country. She also practices Islam. Ozeer moved with her family in 1995 out of Sri Lanka, which at the time was in the grips of a civil war, to New Zealand.

“Please don’t hold that against me,” she jokes.

She has since migrated to Australia, where for the third time, she was a minority. Where one might look at the term “migrant” with a negative connotation, it’s a word that Ozeer identifies strongly with.

Her resilience comes from having to deal with events in her life that most children in Australia have never dealt with.

“I was so used to curfews and bomb attacks, mind you I was living in the capital, because it was just our way of life, like it was normal as a young person hearing a bomb going off and then moving on,” she says.

When Ozeer describes her work at Bounce, it makes sense that someone with a journey such as hers wants to help others in the same scenario, as it’s something she’s so passionate and knowledgeable about. What started as some conversations around 2009 or 2010 about the struggles refugee youth have been having settling into their communities, had become a fully-fledged non-for-profit organisation by 2011.

“We [the co-founders] were a group of young professionals who were really local and wanted to support in some way,” Ozeer explains.

Bounce works as “youth mentoring youth” whereby those involved are put into groups so that the mentees can more easily trust their mentors. If they get to a stage where they feel ready for some one-on-one work down the track, then Bounce are more than happy to do that as well.

One way they get the youth in the program to interact with their community is through sport, something that Ozeer has always been passionate about.

“Growing up sport was my avenue to connect with the community. So [Bounce] and a few other groups were involved in founding a social sports program in the Dandenong region,” she says.

They have since set up a separate women’s program with both running successfully.

“It’s using sport to engage the community which is a huge passion of mine given sports played a huge part when I was growing up.”

It comes as no surprise then, that Bounce has been such a success story with countless members not only being granted greater opportunity because of the program, but even being able to launch their career out of it.

One such example was a young man who entered the program with no clue as to what he wanted to do, and who had experienced some “horrific things back in his homeland”. Bounce not only gave him a mentor to work with him on skills such as his English, but they also supplied him with other activities and workshops. One of which was photography.

“After this photography workshop, he decided to pursue that career and now he’s a professional photographer, which is great,” Ozeer says.

Throughout our interview, the moment I would ask a question, Sarah would leap into her answer. But my last question had her stumped: What does the future hold for Sarah Ozeer?

This time, it took Ozeer at least 90 seconds to stumble her way to her answer.

“I would like to be one of those leaders who can be at the forefront of helping to create positive change and really, uh, help get the voices of the people heard at a global perspective,” she says without a lot of conviction.

“I don’t know…can you please ask me again in five years?”

While she might be unsure over what her future holds, Ozeer says she sees herself as a strong leader in their community. In fact, she was able to describe herself best: “Human rights advocate, a social justice advocate, and really a champion for the community.”

Ben Hann is a third year Bachelor of Media and Communications (Sport Journalism) student at La Trobe University. You can follow him on Twitter @BenHann6

Photo was provided by Saarah Ozeer.