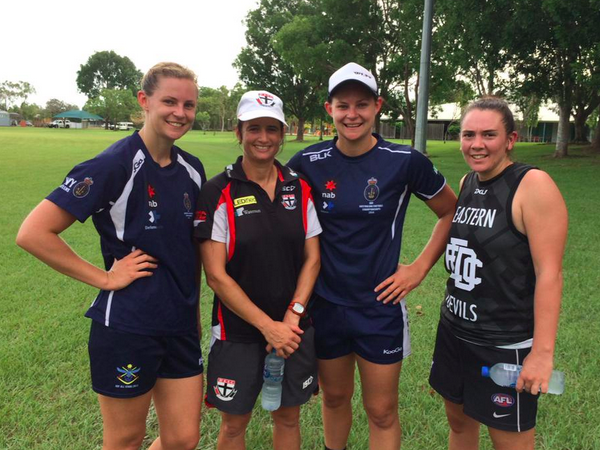 The St Kilda Football Club aims to be the next AFL team to affiliate itself with a women’s side.

The Saints are currently writing a proposal that outlines its contention to host a side in the new women’s league, due to commence in 2017.

The AFL announced the competition for elite female footballers in August, and they’re hoping to have six teams competing in the league in its inaugural year.

Development coach at St Kilda, Peta Searle, tells upstart that women’s football is growing in popularly and as a result, there will be a lot of competition between AFL clubs for the right to have a women’s side.

“There’s a lot of fight now between the other clubs and we certainly want to be one of them,” she says.

She says St Kilda is well suited to hosting a women’s side because of its genuine commitment to supporting women in a male dominated environment.

The Saints have two women on its board, and Searle is the first female to be an assistant coach at AFL level.

“We really are creating an environment here that promotes and supports women in football to achieve their dreams,” she says.

“Our brand in who we want to be really closely aligns with supporting a women’s team.”

She says that the club’s location near Frankston has a community that will embrace a women’s team.

The Mornington Peninsula has the fastest growing participation rate in women’s football.

“It’s such a big growth area and it’s such a big area in terms of its population density and we service that whole area,” Searle says.

“I think it would be really fitting for that area to have an elite AFL women’s team so there can be pathways that follow all the way through.”

First class tour of tanks! and coaching the girls what an Awesome day in Darwin with the ADF. pic.twitter.com/WQrpAvFkfH

It would create a pathway for girls, that Searle didn’t have when she was younger.

“When I was growing up kicking the ball in the backyard as a six or seven-year-old in my Trevor Barker jumper, I just naturally assumed that I would go on and play footy for St Kilda,” she says.

“And then when I got to the age of 13 or 14, there was a realisation that was never going to happen.”

But the new women’s league will provide an elite level of competition for young female athletes to aim for.

Of the six teams that will make up the league, it’s assumed the Western Bulldogs and Melbourne will be automatic starters after the headway they made playing exhibition matches.

This includes the first women’s match to be televised live on Channel Seven this year. The game had more viewers than the broadcast of the match between Essendon and Adelaide that followed.

Searle says the live broadcast was something the women’s game had been building towards.

“The push has been there for some time. From the first game that had happened there was always a cry out that this should be televised,” she says.

“You go through the steps of I guess broadcast radio, and then live streaming. So the next step was definitely to do that [television broadcast].”

She says that this presents a commercial side to women’s footy that may make it more marketable and attractive to broadcasters.

The success of women’s football will not only help the sport’s commercial needs, but will give girls an incentive to continue playing sport.

According to the Australian Bureau of Statistics, only 28.5 per cent of females compete in organised sport, in comparison to 34.3 per cent of men.

Girls in all age groups are less likely to participate in sport.

“It’s just good in terms of the community as a whole because you’ll keep girls in sport for a longer period of time,” Searle says.