A look into whether the score review system works in the AFL, if it can be enhanced and how it impacts the fans’ experience. 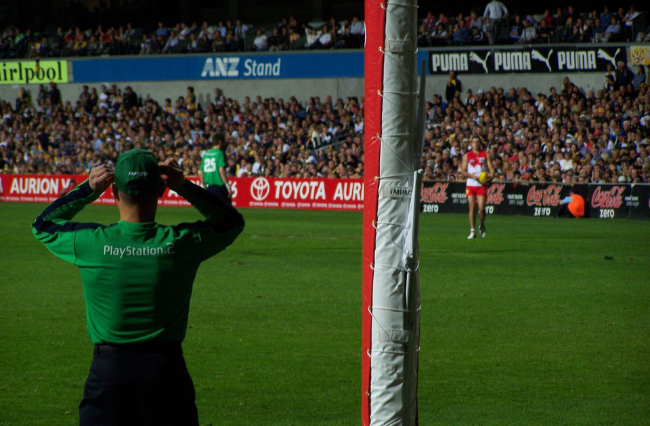 Almost 25 years ago, the AFL investigated implementing a score review system using laser beams in the goal area and a chip inside the leather-stitched Sherrin footy to determine its path.

Richard Auhl, the AFL’s national director of goal umpiring at the time, told The Age that the technology wasn’t up to scratch because “unless they can cover the situations 100 percent, which they can’t, it’s just not worth it”.

Fast forward to today, and the 2022 season marks 10 years of an operational score review system in the AFL. But, according to numerous fans, coaches and commentators of the sport, it still doesn’t work.

After a goal was overturned by the score review during an elimination final loss against Brisbane, Richmond Coach Damien Hardwick told reporters at a press conference last month that “the technology is not to the level it needs to be, so we either get it better, or we don’t have it”.

For supporters, it can strip the immediacy and enjoyment of the game. AFL fan Ashley Gallagher says the celebration of a goal is devalued due to every goal being checked and the time it takes for the score review system to come to a decision. In a game between Adelaide and Carlton earlier this season, the score review took over a minute and a half only to revert back to the original decision made by the goal umpire.

So, is the score review worth having in its current state? Or can it be improved? Or should it be scrapped completely?

Firstly, let’s take a look at whether it can get better. The current system, the AFL Review Centre (ARC), uses only camera angles and microphone technology inside goalposts to determine if a goal has been scored. This process can take up to a couple of minutes.

There are some who believe that re-visiting laser technology could improve the ARC. Dr Dale Otten, a laser expert with over 20 years’ experience, says that developments in laser technology have come a long way since the AFL’s failed experiment almost two and a half decades ago.

“There’s lightyears in advancement in every decade here, and the possibilities are significant,” he tells upstart.

“The real question is not how far has technology advanced, but how far has it advanced towards a particular goal?”

To improve the ARC, Dr Otten believes lasers could potentially be used to detect a specific chemical emitting from the football, rather than a chip inside the Sherrin which didn’t last due to the repeated kicking and bouncing of the ball. The chemical detected by the laser would distinguish the football from other things that may come into contact with the beams, such as players or a bird flying by.

“I imagined, well, could you use something that the ball already has, a chemical constituent that’s unique compared to other things that might interfere with your signal?” he says.

“If there isn’t … could you potentially paint this in glowing nano crystals or things along those lines, basically a fluorescent dye of some kind, that means that when a laser is used which features a high intensity source, it can create a fluorescent or other response that is easily distinguished by detectors located on or around the goal line?”

Dr Otten also says that a laser could be used to extend the goalposts, possibly eliminating the problem of deciding whether a ball went over the post or not, by creating a “pole of light”. While he is not actively pushing for any changes, Dr Otten would be happy to consult with the AFL if they asked him, and puts a rough five-year timeline on perfecting the technology.

There are possibilities to improve the ARC. But a secondary issue to investigate is whether it’s worth having it in any form, if it ruins the spectacle of the game for fans.

Fan Max Barry’s perspective on score reviews stem from his job as a novelist. Good football and good fiction, he says, both require natural suspense for the game or tale to flow. He says the score review process can be likened to a reader being taken out of a good story they were previously invested in.

“You never want the audience to sort of step back and think, hang on, I’m being manipulated by the artist here, they’re making me feel this way,” he tells upstart. “You want them to be caught up in it and make it feel very organic.”

“That sort of suspense, where we are in suspense waiting for the ARC to make a decision, is definitely a bad kind of suspense where it is drawn out, it is artificial, it’s not evolving as opposed to the good natural form of suspense which is found in most sports.”

While Barry and Gallagher agree that a laser detection system could work due to the instantaneous response time, the lengthier drawn-out process the ARC currently requires tarnishes a fan’s experience. Gallagher says he is also frustrated with being unable to immediately celebrate a goal, because even if a goal is given the all-clear, it’s still checked before the play resumes.

“A lot of the time now, you can never have complete certainty that a goal is a goal and part of the enjoyment of footy is the celebration of a goal, that’s really where you peak in terms of your enjoyment levels,” he tells upstart.

“Do we feel that we are getting tangible enough benefit from the score review system that means that our sacrifice, which is our devaluing of the celebration, is enough? I would argue that it’s not … in fact, I don’t think we should bring in anything to the game that devalues celebrating a goal.”

Article | Tarquin Oakley is a third-year Bachelor of Media and Communications (Sports Journalism) student at La Trobe University. You can follow him on twitter @TarqOakley.

Photo | Goal Umpire paying close attention By Michael_Spencer is available HERE and is used under a Creative Commons licence. The image has not been modified.