The 16-year-old Melbourne Victory youth prospect is at the start of a promising career, writes Thomas Odell. 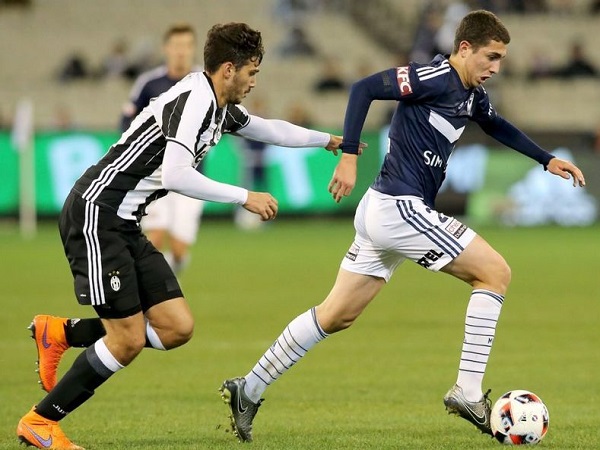 Sebastian Pasquali, a humble teenager from Wangaratta, entered the fray of world football and sent a message to the A-League and beyond in last week’s International Champions Cup.

The seeds of his talent were sewn early on, and club President Dean Campagna says he is not surprised at his recent performances.

“He played juniors right up until 14 at our club, and he’d stand out in every age group he played in,” he tells upstart.

“He often played two or three years above his age group, so if he was in Under 12’s he’d play Under 14’s as well, just to help with his development.”

In a sport that demands dedication and persistence at a young age, players don’t often make it into a professional environment without some sort of family sacrifice, especially in Pasquali’s circumstances.

“About two years ago he and his mother moved to Melbourne and his father and older brother stayed in Wangaratta,” Campagna says.

“When he was invited to the national training program, we had to discuss with him to move into the metropolitan area…because with the training program they only had one night off, which meant travel [from Wangaratta] was not an option,” Seroshtan says.

The NTC coach also stressed how important it is for parents to support their children in this process.

“The parents are big contributors, their sacrifice is amazing – without parents it’s not going to happen,” he says.

“[Sebastian’s] dad was an intricate part of his development…it’s not just the state programs they were doing, it’s the variety of additional work as well as individual training sessions.”

Currently an integral part of Melbourne Victory’s Under 20’s and Senior National Premier League (NPL) setup, Pasquali won’t be getting carried away after his impressive first team appearances.

“The kid himself is one of the most humble, quietly spoken, well mannered young men you’ll ever meet in your life,” Campagna says.

Seroshtan believes his attitude is what sets him apart.

“His determination is amazing, that’s what makes him so special, his strength of character, seriousness, strong mentality and positive attitude – he’s a very, very strong minded kid.”

“There are not that many players that I have seen at this particular age who are definitely the real deal – he is the real deal.”

The youngster looks calm and assured on the ball, bearing a striking resemblance to Queens Park Rangers and Socceroos midfielder Massimo Luongo.

Campagna says it won’t be long before the 16-year-old enters the furnace that is European football.

“He’s been over to England and spent time at academies and done some trials over the years,” he says.

“He’s the type of kid who’s got ambition and with that he’s got drive, so I’d suggest he’d be overseas in the next few years playing in England or [elsewhere in] Europe.”

“He has all the attributes of a player that will go further than the A-League.”

“This is only the tip of the iceberg.”

Thomas Odell is a second year Bachelor of Journalism (Sport) student at La Trobe University. You can follow him on Twitter at: @tomodell18