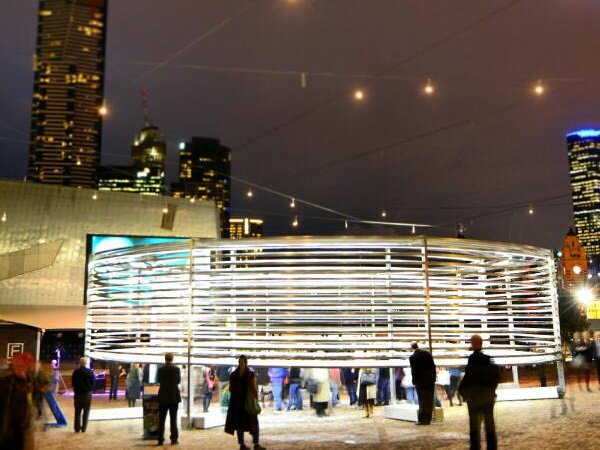 Nothing can really depict the essence of Melbourne like its winter. It’s the time when the city’s fashion is at its best, when the iconic MCG is filled with AFL supporters, and when arts and entertainment flourish across all areas.

The Light in Winter festival kicked off last week. The annual festival, held at Federation Square is a public event designed to bring all of the city’s arts culture together for three weeks.

The festival director of The Light in Winter, Robyn Archer AO (right), tells upstart the grounds of the event:

“[It is] to enable beautiful public art of great skill, in the framework of light and installation, and to offer a central public platform for disparate culturally rich communities to have a voice.

“To allow those things to mingle, and to make this great dialogue free to the public in an atmosphere of winter warmth for the heart of Melbourne.”

A very innovative approach was taken in the art direction in order to offer the events and installations a greater level of significance for public interaction.

“We decided that it should combine art which is genuinely pushing the boundaries of technology, but that it should also connect to grass roots communities in Melbourne.

“I was keen to do something with lighting, but not just a decorative event – depth and quality was more important than superficial spectacle,” says Archer.

But what exactly goes into deciding what is seen by the public?

“We simultaneously create a conversation with members of our partner communities . I might suggest a thematic approach and we see if that has legs,” says Archer.

“This is where we started – on a wintry night eight years ago, with six communities – now we work with 25 communities – some big and strong, some quite fragile, and with artists of the international calibre of Asif Khan.”

The Light in Winter works with artists, both independent and from these various communities in Melbourne, who are invited to cover a theme that is of interest to the festival.

“We worked with artists from the beginning and… acknowledge the massive contribution that culturally diverse communities have made to the shaping of Melbourne.

“At the same time it goes beyond the mere decorative and seeks out artists who are working in light, and simultaneously push the boundaries of technologies which can be utilised to create great art,” says Archer.

The initial theme for this year’s Light in Winter festival was cycles of life.

However, through UK architect Asif Khan’s majestic installation, Radient Lines, this idea led to the notion of shrines, and the role that they play within both a community and the individual to offer memorialisation and remembrance.

With festivities surrounded by these themes, and others in past years, some may question whether Melbourne’s Federation Square is the right place to hold the festival.

“Melbourne wouldn’t be the city it is without the riches that diverse communities have brought to it when they settled here.

“This festival reflects the heart and soul of Melbourne,” says Archer.

The Light in Winter doesn’t just act as entertainment and intervention for the public, but also a platform for those involved in the festival, showcasing their forms of art and subsequently, their culture.

“Our communities really value this opportunity to shine and to throw a light in the rich fabric of their cultures, and the string of superb international artists we have commissioned respect this platform for their finest work,” says Archer.

The festival is currently in its eighth year, proving to be a successful event that the public are drawn to. This is to be attributed to the aestheticism that’s offered by the entertainment, that is further brought together to symbolically warm up Melbourne during winter.

“The program deals with ideas, and enlightenment (forums, themed performance, histories etc) as well as sheer beauty in the midst of winter,” says Archer.

“I think it’s successful because it has a meaning which is embraced by so many people.”

The Light Winter is on until 22 June.

Julian Gasparri is a third-year Bachelor of Journalism student at La Trobe University, and is the current editor of upstart. You can follow him on Twitter: @JulianGasparri