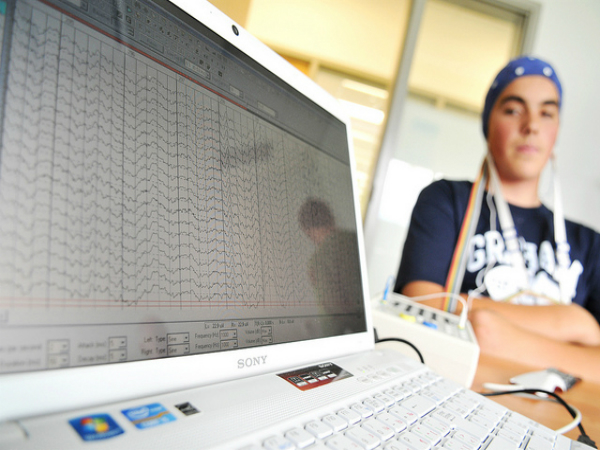 Due to mitigating circumstances – including concussion lawsuits worth nearly US$1b – American sports have leaped to the forefront of research in understanding and preventing concussions.

The X PATCH is currently being used in a range of elite sporting competitions across America, such as the National Football League, National Hockey League and Major League Soccer.

The Randwick Rugby Club is the first to implement the initiative in Australia.

The X PATCH is around the size of a ten cent coin and is placed behind the ear of the player. The sensor measures G-forces (g) of contact to the head and the data is then analysed by doctors post-game.

Dr Adrian Cohen was responsible for implementing the X PATCH initiative at the Randwick Rugby Club. He tells upstart that the sensor provides a platform for other tests to build upon.

“The project with Randwick is a combination of baseline testing, cognitive testing and then some more physical testing like balance and physical exertion tests,” Dr Cohen says.

Cognitive testing involves establishing a baseline of intellectual performance for the athlete, often during the preseason, which can be compared after a head injury is sustained. The Axon Cogstate is an online test used to measure the attention and processing speed of the athlete, two key areas that are affected by concussion.

In order to gauge an athlete’s balance after a head knock, the Balance Error Scoring System (BESS) is commonly used. The BESS involves a series of stability tests whereby the amount of deviations from the player’s original stance is monitored and scored accordingly.

Unfortunately, the sensor alone is unable to diagnose a concussion. Instead, it works in conjunction with the cognitive and balance tests to help determine an individual’s susceptibility to concussion by looking at the different impact forces.

When quantifying the data obtained from the X PATCH, an impact of 10g-40g appears on the low end of the impact scale. Anything between 40g and 70g is considered medium impact, while more than 70g is classified as high impact. Still, the amount of G-forces sustained will affect each player differently.

“An individual knock of 40g can knock some people unconscious or can cause some other symptoms such as poor balance, poor vision and immediate prolonged headache,” Dr Cohen says. “Yet there are players who sustain over 100 G-forces who don’t sustain any of that.”

“We must treat each case individually. We have to make decisions based on that player and what we know about them. And when in doubt, sit them out. No game is so important that it can’t be missed,” he says.

The fact that rugby clubs have become willing to put these types of initiatives in place reflects a shift in mentality towards concussion.

“I think we’ve certainly come a long way. It’s no longer about your manliness to get up after you’ve been knocked out – to get on with the game, to man up, toughen up,” Dr Cohen says.

This change in mindset extends to the AFL, with Brisbane captain Tom Rockliff taking a strong stance on concussion after he was stretchered off during the Lion’s round five clash against the Gold Coast Suns.

“There’s no strength in being a hero [and] going back out there after a concussion, it’s just not worth it anymore,” Rockliff said on the Brisbane Lion’s website.

“Footy is the most important thing to nearly every player on a list, but you’ve also got to remember it’s a 10-15 year period of your life and you’ve still got so many years to live after that,” he said.

Instead of prioritising a return to the field, elite sportspeople are starting to take the time to step back and consider their futures. This is a welcome change in attitude given the long-term effects of concussion.

Gone are the days where a player’s machismo takes priority over their wellbeing, and here’s hoping they’re gone for good.

Featured image by University of Fraser Valley via Flickr