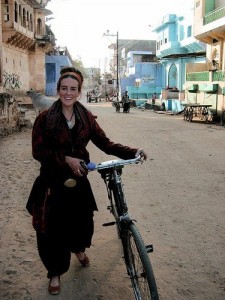 Jess Hill had the dream job of being a travel writer. Flying first-class around the world and reviewing five-star accommodation, life was pretty good.

But as Hill sat poolside at Club Med in Mauritius, the realities of her surroundings became impossible to avoid.

So, on the flight home, Hill hung up her reviewer hat and planned a new adventure. Now, just three years later, Hill is working as a producer for AM, The World Today and PM on ABC Radio.

And it’s in this role that the self-confessed Twitter-luddite has learned to use social-media to cultivate contacts, make new friends and, most impressively, consistently deliver breaking news and interviews.

Hill joins on this episode to share her social media story, focusing on her reporting of the Arab Spring, and offers some advice that every journalism student should think about before jumping online.

Each week, Sean asks our guests to add three names to our Social Situation ‘must follow list’.  This will be updated weekly. Hill’s additions:

Evegeny Morosov – Author of ‘The Net Delusion: The Dark Side of Internet Freedom

StoryfulPro – This is a private account run by the great team at Storyful. You need to send a request and meet their criteria to become a follower, but until then check out their website and public Twitter account

The first season of Social Situation winds up next week and we’re going out with a bang. Our special guest will remain a mystery until Monday 12th of October. Make sure you check back then!

Sean Power is a first-year Bachelor of Media Studies student at La Trobe University, and the founder of the Social Situation.  You can follow him on Twitter: @powersoz