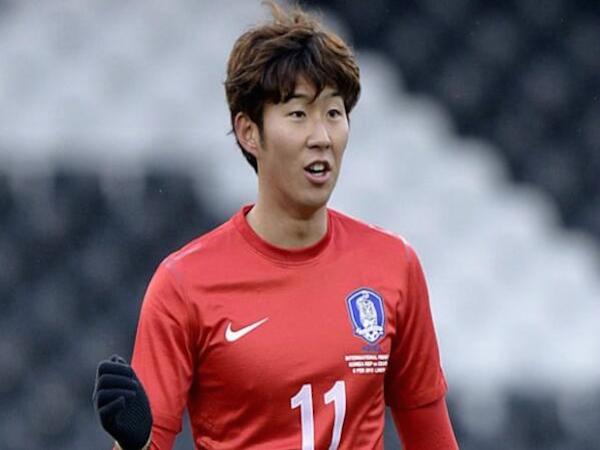 Son jumped ship domestically from Hamburg for €10 million and has enjoyed a prolific first season in his new surroundings.

The 21-year-old will form what promises to be an entertaining partnership with Borussia Dortmund forward Ji Dong-Won.

After being starved of starting opportunities at Sunderland, Ji was snapped up by German club Augsburg on loan, where he flourished. Once that deal was made permanent, more goals flowed. It was this second spell at Augsburg that drew attention from Bundesliga runners-up Dortmund. He’ll join Jurgen Klopp’s side from July 1.

This duo, along with Arsenal striker Park Chu-Young, who is likely to appear off the bench, means manager Hong Myung-Bo can be confident of advancing past Group H ahead of Russia and Algeria. Park has been starved of playing time in North London and sought loan football elsewhere, but has still kept his place in the South Korean ranks, scoring in their recent 2-0 friendly win over Greece.

It’s Hong’s back four where the frailties lie. Though on paper, the Korean’s can boast an all European-based side for their first match in Cuiaba against Fabio Capello’s Russia on June 17.

This doesn’t include Marcello Lippi-endorsed central defender Kim Young-Gwon of Chinese giant Guangzhou Evergrande. The Italian legend believes the 24-year-old has the qualities to play for Manchester United.

Praise can’t come from too many higher places; one would assume Kim is set for a breakout tournament if he’s to oust more German-based talent in the form of Park Joo-Ho (FC Mainz) and Hong Jeong-Ho (FC Augsburg) or Yun Suk-Young of newly promoted English side Queens Park Rangers.

In the middle of the park, Sunderland’s Ki Sung-Yueng should accompany Cardiff’s Kim Bok-Yung, Bolton’s Lee Chung-Yong and the free-scoring Koo Ja-Cheol of Mainz; he has 12 goals from 36 caps. These four will have to fill the void left by the now-retired Park Ji-Sung – the midfield hero finished his international career with 100 caps and 13 goals to his name.

Six K-League players have been rewarded for their domestic form with a place in Hong’s squad. Most notable of this half-dozen is Lee Keun-Ho. He was included in the K-League Team of the Season and, on-loan from Ulsan Hyundai at Sangju, the 29-year-old striker scored 15 goals from just 25 starts.

After famously surprising the world with a semi-final appearance under Guus Hiddink’s leadership in their co-hosted 2002 tournament with Japan, the Korean’s have advanced past the group stages on consecutive occasions in Germany and South Africa, before faltering at the Round of 16.

Defensive frailties has plagued the nation’s results in 2013 and to start 2014 and, as such, a counter-attacking 4-2-3-1 is the most likely approach for Hong’s men in Brazil, despite being drawn into a favourable group.

Hong will have learnt a lot about the players he has at his disposal in late January this year when, in two friendlies in the United States against the USA and Mexico, the Koreans lost 4-0 and 2-0 respectively to two similarly competitive sides to his own.

His job may have come under scrutiny following these two results before a major tournament, but the 2-0 win in Athens against fellow World Cup-qualifiers Greece may have loosened the attention surrounding his future. Hong will now know his side’s best chance in Brazil will be to remain organised and set-up to optimise a quick counter-attack through the passing ability of Ki, the pace and power of Son and the finishing of Ji.

The Republic currently sit 57th in FIFA’s much criticised world rankings, but they enter the tournament as Asia’s third ranked side behind Iran and Japan.

Luke Sale is third-year Bachelor of Journalism (Sport) student at Melbourne’s La Trobe University and is a staff writer for upstart. You can follow him on Twitter @lukesale1.