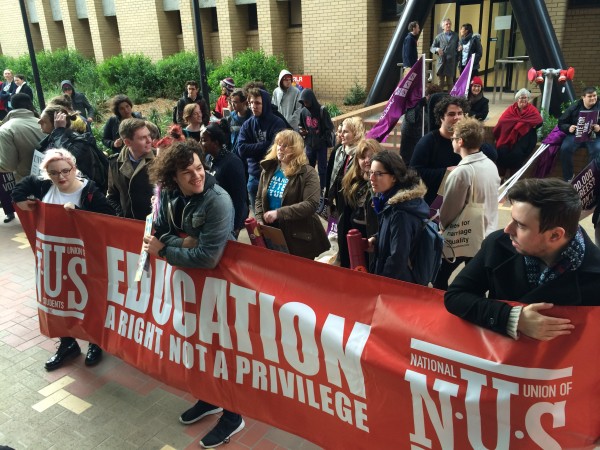 The Education Minister was at La Trobe for the presentation of Australian Research Council (ARC) grants.

The protestors took this opportunity to express their anger about the ongoing proposals to deregulate university fees.

Approximately 50 students and representatives attended the protest that was organised with only 24 hours notice.

“We found out yesterday through some fantastic resources that Christopher Pyne was coming to campus,” Jasmine Ingram, President of the La Trobe Student Union told upstart. “We are here today to show him how disgruntled and unhappy students are about the changes to higher education.”

Police and security struggled to prevent protestors from storming into the La Trobe Institute of Molecular Science building.

Once the presentation began, the protestors rapped on the windows of the building, chanting slogans such as: “Chris Pyne, get out, we know what you’re all about, cuts, job losses, money for the bosses.”

“It’s outrageous that any Liberal would show their face on a university campus, so we’re hoping to send a really clear message that they’re not welcome here and we will chase them down every time they dare show their face here,” she said.

After the presentation, a decoy car was used to distract protestors as Pyne escaped out of a separate exit.

Joely Mitchell is the editor of upstart and Tam Kendi is the deputy editor. They are both third year journalism students at La Trobe University. You can follow them on Twitter: @joelymitchell and @tamkendi.