University students have taken to the streets to protest the government's changes to university funding. 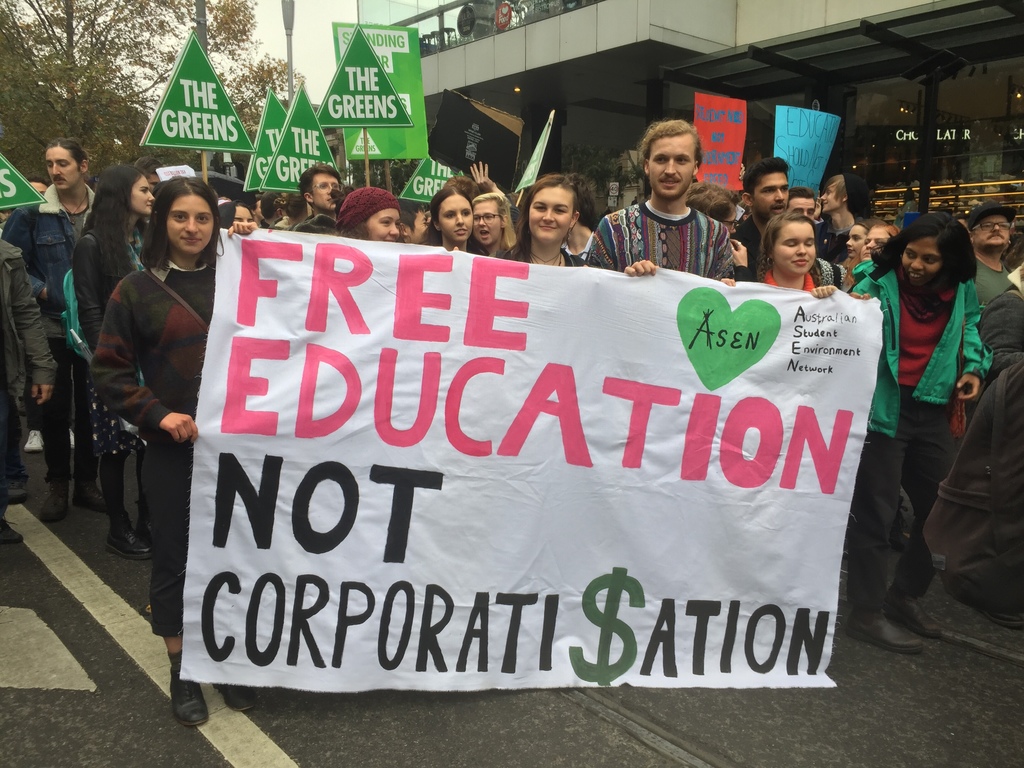 Hundreds of demonstrators turned out in front of the State Library in Melbourne on Wednesday afternoon to protest the Government’s tertiary education overhaul.

The protests come after the Turnbull government proposed raising university fees and lowering the threshold for HECS loan repayments from $55,000 to $42,000 in last weeks budget.

“The government is trying to make students pay far more for a quality of education that continues to decline. Over the last couples of years we have seen class sizes booming, content moved online and staff fired,” she tells upstart.

“This is also happening in the context where they are giving a $62 billion tax cut to corporations. There is obviously enough money to fund education but they want to make students pay for hand-outs to the rich.”

Also included in the budget was a proposal to raise university fees by 1.8 per cent in 2018, increasing each year until they have risen by 7.5 per cent by 2021.

One protester, Tessa, thinks that the proposed measures only served to create a socio-economic divide.

“I have a family who have been able to make sacrifices so that I can have an education but there are so many who don’t have that privilege.  I think anything that widens that gap is disgusting,”  she tells upstart.

Students in Queensland protested outside the Brisbane Convention Centre where Prime Minister Turnbull was addressing an LNP budget lunch.

The marches were not the first time that students voiced dissatisfaction with this year’s budget measures.

Days after the cuts were first revealed, Education Minister Simon Birmingham was interrupted by protesters during a speech at the National Press Club.

Last Monday, Senator Birmingham was again heckled by students during a live taping of Q&A.

Speaking to ABC Radio, Senator Birmingham defended the changes, saying that the current debt is unsustainable in the long-term.

‘The last thing I want to do is to see a future minister in my shoes in a position where they say ‘this loan scheme is no longer affordable’,” he says.

The budget forecasts that these changes will save the government $2.8 billion.

Both Labor and the Greens have announced their intention to block the proposal, meaning the government will need to win over ten of twelve crossbenchers to pass the measures in the Senate.

Some universities have also expressed concern about the consequences if fee increases were to be introduced.

La Trobe University Vice-Chancellor, John Dewar said in a statement that he was concerned that the measures might deter people from pursuing higher education.

“It seems counter-intuitive for the Federal Government to talk of boosting innovation and productivity, while also introducing financial hurdles to creating the very workforce that will deliver on that ambition,” he said.

“Cutting university budgets is a short-sighted measure that will impact our ability to provide the kind of education that our current and future students will need to thrive in the knowledge economy.”

Regardless of the outcome, Demanuele has pledged that students won’t stop until their message is heard.

“We’ll keep protesting until these fee increases are taken off the table.”

Jessica Coates is a third year Bachelor of Media and Communications (journalism) student at La Trobe University. You can follow her on twitter @jesscoates4