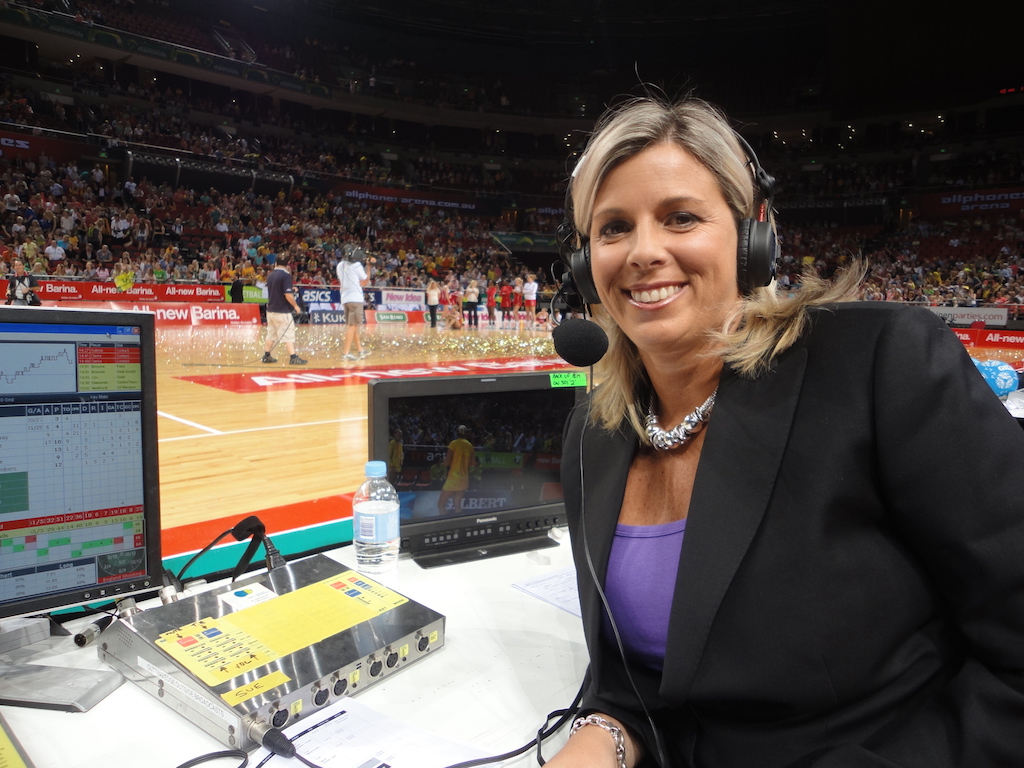 There wouldn’t be many netball fans who aren’t familiar with the loud and witty voice of Sue Gaudion.

The 46-year-old is well-known for commentating netball with her heart on her sleeve passionately calling the play by play.

Gaudion, a staple of netball in Western Australia was raised in Melbourne and initially was on the path to becoming a swimmer.

“I left swimming because I was burnt out. Had I stuck with swimming I probably would’ve been on a completely different journey,” Gaudion told Upstart.

Gaudion’s family had a huge impact on her growing up. Her father would wake up at 5am every morning and drive her to swimming training. That support then continued when she decided to try netball.

“I think I was always meant to be in sport. I literally spent every waking second of my life in the backyard or across the road at the park with any ball of any size,” she said.

The change to netball for Gaudion was influenced by her friends in year eight participating in team sports. She realised going up and down a pool, all day looking at a black line wasn’t appealing to her.

Within two years, she found herself on the Victorian state team and it was during that time she first experienced coaching.

According to Gaudion, as a player in the Victorian netball system, you must reach a certain level of accreditation for coaching and it’s expected you give back to the netball community.

“I was coaching before I knew I wanted to coach,” she said.

When Gaudion moved to Western Australia to play, she needed to support herself as there was no money in netball. She then found herself flying in and out of Singapore doing work in schools with sports. When a job came up to coach the Singapore National team however, Gaudion had never coached a team.

She got the job, but once she moved to Singapore she realised despite her initial intentions to play and coach, she couldn’t do both.

“During coaching Singapore, I realised that’s what I was meant to be doing, I loved it,” she said.

After spending three years in the Asian city-state, Gaudion returned to Western Australia and coached in the state league before a job at the Perth Orioles came up.

“People were pushing for me to apply. I wasn’t really keen but I put my application in and I ended up being appointed,” she said.

“They gave me a two-year deal. We then found out weeks later that the Commonwealth Bank Trophy would finish at the end of that year and there would be a new competition … so I ended up being that last coach of the Perth Orioles and was the first coach of the West Coast Fever.”

That year was tough for Gaudion. The West Coast Fever finished ninth with only two wins.

“Fever were way behind the eight ball and we struggled to recruit and we just didn’t get results and that was it, I just got cut. I felt like I’d been thrust into something no one had given me any time,” she said.

Gaudion then took a position as head coach of the Welsh netball team in the English Superleague. She spent a couple of months there unsure of what her next step would be before an opportunity presented itself.

“At two in the morning … Liz Ellis rang me and said ‘Would you consider maybe doing some sideline commentating for the league with Channel Ten?’ and I said ‘Yeah why not? Absolutely’,” she said.

“The very next day, Simone McKinnis rang me. At that time she was the head coach at the Australian Institute of Sport and asked me to be her assistant coach.”

She went to Canberra and every weekend when the Fever played at home she would return to Perth using her own money to commentate.

Gaudion says that she will be forever grateful for her darkest moment detouring her life in a different direction towards commentating.

“I had no idea that moment would lead me to where I am. I’m back at the club that I led but in a role that I dearly love, in an assistant coach role while at the same time allowing the growth of myself as a commentator,” she said.

Gaudion’s tried all forms of commentary from sideline, to expert, to caller.

“I love to call the game without a doubt,” she said.

“The longevity of an expert role may not always be there. You look at it now Laura Geitz has retired, Sharni Layton’s retired, there’s a bunch of players who are going to want roles in the media.”

Gaudion’s advice for students wanting to commentate is to be yourself and have great awareness of who you are. She is aware of how her voice and emotions sound and is always trying to drive the rhythm of the game.

“I try to make sure there are moments where we all get to take a breath,” she said.

“You can’t be in fifth gear for 60 minutes. It’s trying to work through the gears of a car so we don’t burn the tyres out right at the start.”