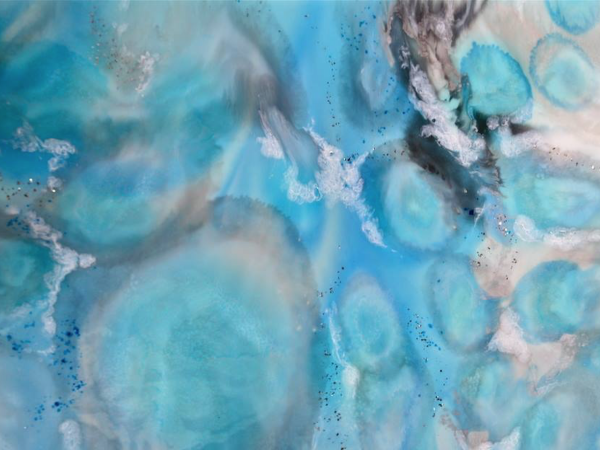 Mitch Gobel has been nominated for Australia Zoo’s Young Conservationist of the Year award.

It comes as no surprise that he’s been selected for the accolade.

The humble, down-to-earth artist has donated more than $40,000 to wildlife conservation in just over one year.

Wildlife Warriors were given $25,000, all thanks to Gobel’s ardent desire to make a difference.

Gobel has been inspired by the late, great Steve Irwin and is continuing his legacy through conservation.

The 25-year-old resin artist, has been described by 1MillionWomen as “a skilled master of his chosen medium”.

His artwork is done by applying resin, a glass-like liquid to a framed structure to create unique patterns and colour palettes.

Each artwork literally, metaphorically and visually tells a different story for both Gobel and his fans.

Since upstart’s first encounter with Gobel in April, he has released a series of prints that are scaled-down replicas of his impressive resin artworks.

He teamed up with Tiger Mist Boutique, and his design ‘Patch Adams’ was applied to a dress and midi-skirt and crop combo.

He has also developed a swimwear range with his best friend and Mitch Gobel Resin Art (MRGA) manager, Alex Gibson.

“We came up with the idea for this almost two years ago,” Gobel tells upstart.

“Initially this was a concept to help promote my art and I guess it still is, although now the main focus is to support our conservation charity and our business.”

On social media, the dedicated, modest pair joke about their lack of knowledge when it comes to women’s swimwear, using the hashtag #WhatTheFuckDoWeKnowAboutBikinis.

A great deal, it seems.

Epic shoot and such a fun day in the sun ☀️ with @mgra_swimwear and the beautiful @bonnee_fahlstrom you killed it girl! @mraagibson @mitchgobel_resinart

An integral part of the design process involved surveying 60 women to see what sort of bikinis appealed to them.

Gobel says that although there’s not a lot of room to move when designing a bikini, he and Gibson are proud of what they’ve come up with after many trials and errors.

With so many artworks to choose from, deciding on only a few is no easy feat.

A total of eight designs will be released: four prints on two varying styles of bikinis, using some of Gobel’s most colourful artworks and a couple of neutral-toned pieces, suiting both tanned and pale-skinned clientele.

“[Gibson and I] want women to feel sexy and confident while wearing them, so we’ve based the designs and print selections around that idea,” Gobel says.

MGRA Swimwear is 100 per cent sustainable and Australian-made.

10 per cent of the profits will be donated to MGRA Wildlife and Habitat Conservation, which Gibson and Gobel co-direct.

Essentially, these bikinis are Designed for Nature.

Gabby Epstein, Sally Botham and Bonnee Fahlstrom are just a few of the famous faces snapped wearing the eco-friendly range on social media.

‘As with my art, I wanted most of these images to tell a story and it has to be authentic. Real people, doing what they would usually be doing in bikinis. I wanted these images to be as creative as possible, but it has to be real and I’ll be doing everything I can to portray that mentality through the images you see and the words you read, related to our brand.’ Here it is! The first sneak peak at @mgra_swimwear 👙Head over to the page to see this image broken down into 9 pieces. From the first image through to the ninth, we tell the story of the brand and what we’ve been up to for the past year behind the scenes of my art… @mgra_swimwear COMING SOON 🎉💥✨   A photo posted by Mitch Gobel Resin Art (@mitchgobel_resinart) on Sep 25, 2015 at 2:40am PDT

Gobel says that collaborations with the Wildlife Warriors, Goongerah Environment Centre and Greenpeace are some of the highlights of his career so far.

He has recently been named as an ambassador for Sea Shepherd – a role in which he is honoured to be a part of and will take very seriously.

It is these amalgamations that have solidified his talent and passion for conservation.

“Some of my favourite artists and musicians have acknowledged my work which blows my mind and this is something I’ve only really scratched the surface of. I’m currently working on a new concept to help promote emerging artists,” Gobel says.

“This is something I’m getting pretty excited about and I’ll have more infomation about this project in a few weeks.”

Through his vision, Gobel says:

“My life now is the very essence of the term ‘living the dream’ and we still have a long way to go. Beyond what I’m doing in my own life I hope that in some way, my story can inspire you to push yourself and achieve your goals. In my mind, the sky is truly the limit and I look forward to showing the world, through my journey, just how far you can take your life when you believe in yourself.”