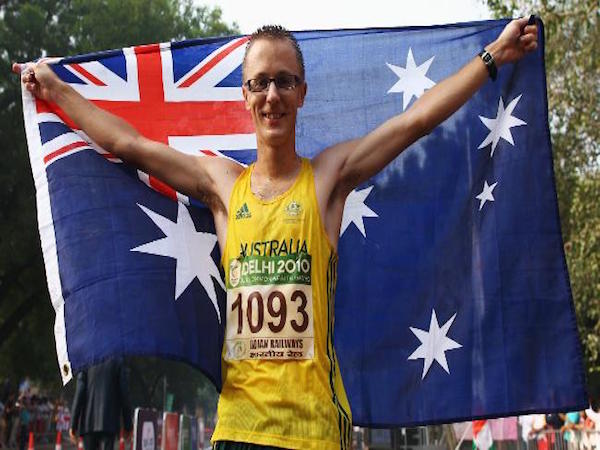 He’s got endurance, determination, and as his name would suggest, he’s got talent.

Jared Tallent soared into the Australian Olympic scene at the 2008 Beijing Olympics by winning medals in both race walking events, becoming the first male to win two athletics medals at an Olympic games in over a century.

With three Olympic medals under his belt, and multiple bronze World Championship medals, there is only one thing Tallent is missing from his collection: gold.

He is hoping this can be rectified at the upcoming IAAF World Championships in Beijing.

Tallent’s race walking roots can be traced back to his early days in Victorian town, Ballarat.

“The one teacher we had was involved in a little athletics club, so every morning she would get everyone to run for 15 minutes around the school, and I just found I really loved running. From there, she encouraged me and our family to join the little junior athletic club in Ballarat,” Tallent tells upstart.

“The first event used to be the walk, and I just found I was quite good at it,” he says.

“That’s where my first coach picked me up.”

Tallent made the World Youth Team in under 18s and the World Junior Team in under 20s. He then relocated to Canberra in 2003 on a scholarship with the Australian Institute of Sport.

The rest, you could say, is history. However, the history books are in the process of being re-written.

Tallent has been vocal about Russian race walking drug cheats, who deprived him of two Olympic gold medals.

At the 2012 London Olympics, Tallent finished second behind Russian athlete Sergey Kirdyapkin, who has since received a doping violation from Russia’s Anti-Doping Agency (RUSADA).

While 30-year-old Tallent describes the race as a highlight of his career, he may still be able to win gold retrospectively and then hopefully get another next year in Rio.

“The Russian Anti-Doping Agency banned him [Kirdyapkin], and only annulled certain results, which fell before and after London 2012. The IAAF weren’t happy with this and they want his Olympic results annulled,” Tallent says.

The IAAF is currently appealing the decision to the Court of Arbitration for Sport.

Tallent says that drug doping may continue in race walking as he believes it is the coaches who drive it. Russia suspended their top race walking coach, Viktor Chegin, over doping.

“It’s really destroyed the sport in the last ten years. Out of all the Russian walkers that have won medals at the Olympics and World Championships, only one of them hasn’t ended up being banned for doping,” he says.

Tallent owes some of his medal success to disciplined training and support from his coach. Tallent is coached by his wife Claire, who is also a race walker. The pair were married in the suburb of Walkerville and are based in Adelaide.

“I train along the river in Walkerville and there’s a church there. For years we thought it would be a great place to get married,” Tallent says. “We never thought about it being called Walkerville.”

Preparation and training for race walking is all year round, but becomes most intense around competition season.

“Training intensity always hits at a peak in the June/July period before the major championships in August,” Tallent says. “My diet is a lot more strict then as well as I try to make sure I am as lean as possible going into those big races.”

Competing in the 20km race helps Tallent focus and increase his chances of success in the 50km.

“I always find that doing the 20k brings me up for the 50k. I get the nerves out of the system, race the course.”

The 50km race is where Tallent has seen past success at World Championships, receiving bronze in both 2011 and 2013.

Away from the athletics track, Tallent hits the books so he has an avenue to pursue after sports. After deciding teaching wasn’t for him, Tallent started studying a Bachelor of Business part-time in 2008, majoring in financial planning.

“I’m really interested in it, I’ve been studying part-time and have one subject to go,” he says.

“My focus has always really been sport, but I’ve realised I’ve got to do something else after it.”

Race walking isn’t a sport that typically receives a lot of media attention.

In 2012, Tallent pleaded for more support for the sport which has continuously boosted Australia’s athletic medal tally.

“It’s been the most successful event on the track and field in the past three Olympics,” he said. “Out of the 10 medals that Australia has won, four of them have been from walks, so it’s nearly 50 per cent.”

Tallent says race walkers can be a little more optimistic about the future of the sport.

“There’s still a long way to go, but definitely getting rid of that coach [Viktor Chegin] is going to help the sport a lot.”

The IAAF World Championships run from August 22 to August 30.

Each week the upstart sports section and multimedia team will profile professional athletes from sports not typically covered in the media, in our new section, The Other Sports. Throughout this segment we are hoping to convey the life, struggles and dedication of modern day professional athletes. We also aim to give readers an introduction to these sports.