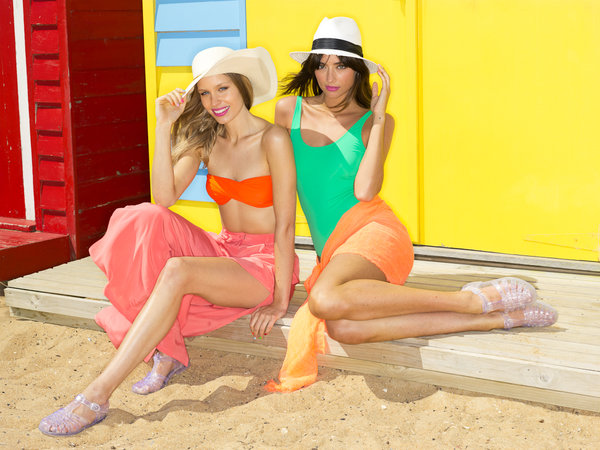 First it was a girl wearing a crop top at a music festival, then a group of guys wearing flannel shirts at the park. Now everyone is wearing those candy coloured shoes that make you feel like you are walking on gummy bears.

The fashion industry is like an ever-revolving door, and just like karma, what goes around comes back around. The good, the bad and the ugly trends are making a comeback. So it’s time to dig deep in your wardrobe and reunite with your favourite childhood trends.

This summer, along with Jelly sandals, fashionistas can also expect the return of double denim, round glasses, platform runners, white heels, boot-cut jeans and lots of bright colours. Apparently the perm is coming back too, but for everyone’s sake, let’s hope that one is just a rumour.

While the 90s were a great time for pop culture and music, many would argue that the style was not so much on-point. Luckily for those who love retro clothing, fashion runs in cycles.

According to Google’s shopping blog, searches related to 90s fashion in the US have increased enormously in the last 12 months. Queries regarding overalls, round sunglasses, zubaz pants and Jelly sandals have escalated by more than 100 per cent.

Love it or hate it, these styles are coming back.

For Kristian Klein, founder of the Jelly Bean label, the return of 90s fashion styles is less about an outfit statement and more of a fond recollection of his youthful days.

“Everyone has a nostalgic memory from their childhood, because they [Jelly sandals] were there for so long. And when people see them, they remember fun times.” says Klein.

“So it’s not so much of a fashion memory, it’s a lifestyle memory.”

As a child, Klein owned a pair of blue Jellys, which he rediscovered in his wardrobe when he was 16. At the time, his 10-year-old sister fell in love with them and he wanted to buy her a pair so she could create Jelly memories of her own.

Much to his disappointment, Jelly sandals were no longer available.

“As far as I could find, there was nobody that was producing them. So that was a kick in the guts, because I wanted to get them for her. I started e-mailing everyone, and tried to find someone that could potentially manufacture them. When I went to buy a pair for my sister, I ended up with 16,000 Jellys instead,” says Klein.

Kleins brand of Jelly Bean sandals debuted on the Australian market in 2011, and since their arrival, demand has drastically increased. Today, they are available in a range of shoe stores around the country, and can also be purchased via their online store.

The 90s fashion hype has also taken over social media, with thrilled fans sharing their purchases on Twitter, Facebook and Instagram, using several hash tags such as: #areyoujealy?, #jbeans and #jellysareback.

Jelly shoes were awesome back in the day and they are BACK again! See how I styled them 🙂 #JellysAreBack #PMedia http://t.co/jvWuhDv4Gi

Jelly Bean Sandals – The Perfect Summer Shoe #JellysAreBack: I was so excited to hear that Jellys are back! Th… http://t.co/Atq0mhbgjo

Although fashion trends always seem to disappear after the initial craze, Klein is confident his sandals will stick around and the Jelly Bean label will expand internationally.

So, this summer, sing along to the Spice Girls, put on your Jellys, throw on a crop top and let fashion take you back in time.