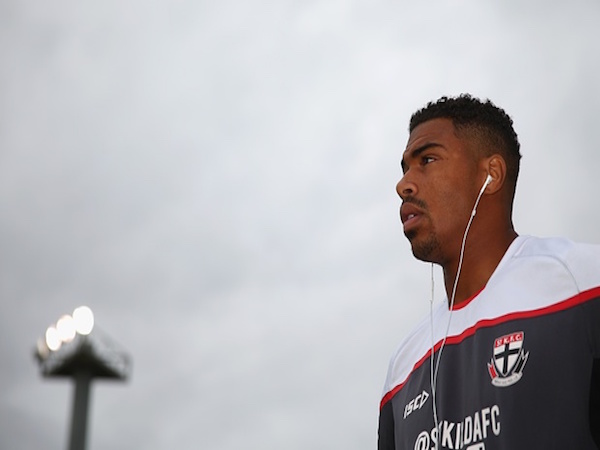 When Jason Holmes contested the opening bounce on Saturday night’s match between the Saints and the Cats, the AFL ticked another item off its bucket list.

Holmes became the first born and raised American player to appear in an AFL match at the top level.

AFL National Talent Manger, Kevin Sheehan, tells upstart the most pleasing thing about Holmes’ debut was his ability to impact the game itself.

“He really contributed to what was an exciting draw by St Kilda. His debut was a really important moment, game and day for the sport of AFL itself,” he says.

“He’s had two clearances himself. We haven’t been that dominant at clearances for a long time, in fact probably not for the year, so that’s his job,” Richardson said.

Having never seen a footy until three years ago, Holmes’ journey is similar to Jim Stynes’ back in the late 1980s.

However, unlike the rather novel nature of Stynes’ pathway to the top, Holmes’ debut was the culmination of a highly planned recruitment strategy complemented by some basic economic principles.

“We have a bit of a supply shortage of these very unique, athletic individuals that are able to play in that particular position as a ruckman,” Sheehan says.

“We’ve had to source them from another market to keep up the enormous athletic ability that this position [ruck] normally requires.”

It’s taken over 150 years for an American born and raised player to make it to the elite level, but the AFL community may not have to wait too long to see another take to the field.

On the morning of Holmes’ debut, Collingwood listed player and fellow American, Mason Cox, kicked five goals for the Magpies’ VFL side in an individual performance Sheehan described as “quite spectacular”.

“Mason Cox has adapted remarkably to the game in the 15 matches he’s played,” Sheehan says.

“He’d certainly be a chance to debut in the next two weeks but even if he doesn’t, his progress has been rapid and we’re expecting him to become a significant AFL player. We’ve been absolutely delighted with his development from a distance.”

Measuring 211.4 centimetres, Cox will move past Aaron Sandilands if he debuts to become the tallest man to ever play in the AFL.

The 2015 season has illustrated the importance of the ruckman to a side, with players such as Sandilands, Todd Goldstein and Nic Naitanui all playing influential roles within their team.

Sheehan believes Nic Naitanui encapsulates the characteristics of the modern ruckman that AFL clubs are searching for in the USA.

“He’s [Naitanui] probably raised the bar in many ways for a potential ruckman. He’s got remarkable athletic ability. Not only can he jump, spring and mark, he can run. He’s a super quick athlete.”

AFL recruitment staff, along with representatives from four AFL clubs — North Melbourne, Richmond, Carton and Essendon – recently attended the annual AFL International Combine in the USA. The average height of the athletes there was 204 centimetres.

Following a screening process that involved athletic testing, an introduction to the skills of the game and an interview to determine mental aptitude, four players were selected to participate in an extended program in Australia.

“The four players that we selected from the original 15 at the combine have only recently returned home after a three-week stint out here in Australia. We’re optimistic there’ll be a player or two signed from that group as well,” Sheehan says.

There are currently 15 players on AFL lists that were raised overseas and Sheehan believes this number will continue to rise.

“We think that will grow to something like 30 over the next decade. It’s still a small number amongst 800 professional players in the AFL but still it adds enormous cultural diversity to our game.”

Of those 15 currently listed players, three are from the USA, nine are from Ireland, two are from New Zealand and one is from Canada.