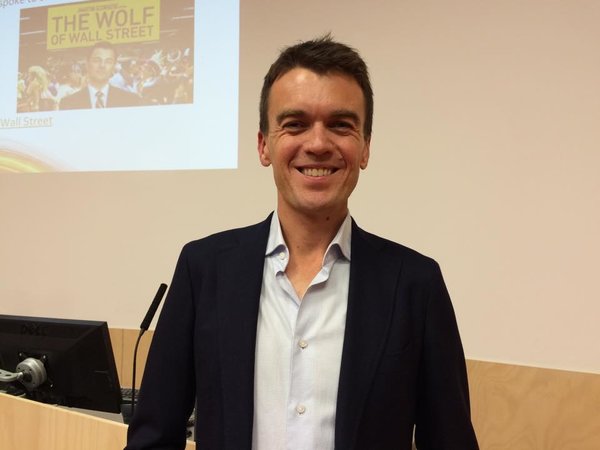 Your alarm goes off, it’s 3am.

You walk into your dark and quiet living room to read the news online and see what’s happening around the world.

The next three hours are a blur of current affairs, talks with producers, and interview questions. Before you know it, it’s 6am and you’re going to air.

Every weekday morning, the pair are on air from 6-9am, talking about an array of topics, whether that be the latest blockbuster film, or a recent attack in Syria.

In 2013, Rowland reflected on his job in an article and said: “The hours are awful, the demands relentless, and the food horrible. But I would have it no other way.”

Prior to this, Rowland spent four years as an ABC correspondent in Washington, and covered the historical U.S. presidential campaign that saw Obama elected.

However, Rowland says: “Nothing ever prepares you to host a breakfast TV show.”

The gig is fast paced, requires him to be across all of the day’s news, and has tested him across many levels, especially as an interviewer.

Rowland has interviewed countless authors, actors, politicians, as well as many everyday Australians.

He shares some of his interview tips with upstart.

Like any seasoned pro, Rowland stresses the importance of preparation.

“I tend to write questions, and research an interview exhaustively – be it the prime minister or an actress. I will read everything and Google like crazy,” he says.

He believes it’s crucial to have a lot of your facts and questions not only written down, but also committed to memory.

In August, Rowland interviewed Mamie Gummer about her new film Ricki and the Flash, which also starred her mother, Meryl Streep.

Like every other journalist in Australia at the time, Rowland addressed this elephant in the room. But thanks to all of his research, he was able to ask her about Cate Blanchett, her favourite actress.

“I got to it towards the end of the interview and she just opened up. This radiant smile, she’d clearly never been asked about that and she proceeded to give this great answer. For an Australian audience [it was] great because she’s our Cate Blanchett,” he says.

“So depending on how difficult or how awkward the interview is, just having all those facts ready to pull out of your head is priceless.”

Make it a conversation

“It is nine times out of ten, a conversation,” Rowland says.

Whether you’re interviewing a politician or a sports star, Rowland says that all of your research can become redundant once the interview happens.

“The person will just say something that both of you class as news or it’s interesting so you explore that. All of a sudden the five minutes is up,” he says.

“You have a very compelling interview because you’ve listened to what they’ve said and you’ve turned it more into a two-way conversation, which is enjoyable most of the time. [The audience] gets more out of that sort of thing.”

As cliché as it sounds, Rowland says never be afraid of asking a dumb question.

“What you think is a dumb question, nine times out of ten it’s not and you’ll get a decent answer,” he says.

If you don’t understand something, like an acronym, he says to just ask.

But try not to interrupt the flow of the conversation, just ask the interviewee to elaborate.

He refers to a debate between Donald Trump and CNN’s Wolf Blitzer, that led to Blitzer calling Trump “ridiculous”.

“Let the viewers decide, and I think 99 per cent of that audience would have decided that Donald Trump is ridiculous,” Rowland says.

“You don’t need the anchor or the interviewer to say that. The audience is smart and they can make up their own minds.”

“You’ve got to pull your punches. Stay completely professional and calm. Look straight down the camera, asking questions,” he says.

And for those dodging questions? Rowland says to move on after about three or four goes.

“In the end, we have about four to five minutes, so you have to be quite strategic about how you approach the interview.”

Once again, he credits the audience, saying that if an interviewee dodges a question several times, the audience will be able to make up their own mind.

The now smooth and charming Rowland confesses to being a shy kid, shy to the point of being socially awkward.

Although he has come a long way, just like us, he still sometimes gets nervous before an interview.

“A bit of nervousness, a bit of anticipation and tension actually helps your live performance,” he says.

“The challenge is to work around it, draw on it, fear is a great motivator. If you fear stuffing up, that is a very powerful motivating force which I certainly have used to my advantage.”

Lastly, Rowland says it’s important to learn from every interview.

“If you’re a journalist who says that you’re absolutely satisfied with an interview, you’re lying. There’s always a question that you can ask. You’re always learning as a journalist,” he says.

“The minute you stop learning or want to stop learning, then you may as well give up and get out the game, because every interview is a learning experience.”

Ewa Staszewska is a third-year journalism student at La Trobe University and the politics and society editor for upstart. You can follow her on Twitter here: @EwaStaszewska.