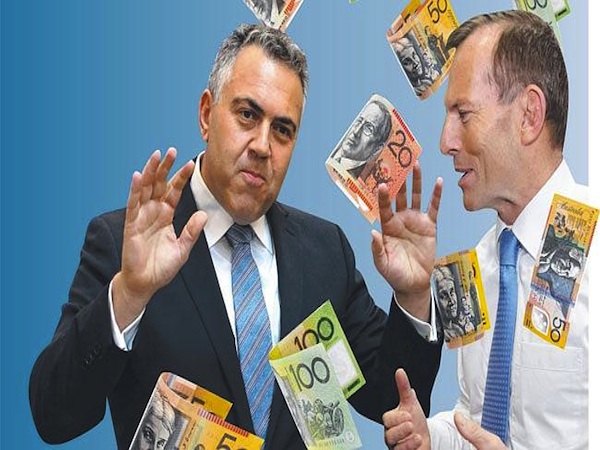 One week after handing down the toughest federal budget in two decades and the Abbott government is already experiencing an unprecedented level of backlash reminiscent of the previous Labor government under Julia Gillard.

Disapproval of the Abbott government peaked in the form of plummeting opinion polls and nationwide protests in a strong indication that Treasurer Joe Hockey’s strategy to fix the nation’s economic outlook at the expense of key election promises has backfired.

But in amongst all the outrage and demands for explanation, the budget still has a small inkling of merit when it comes to addressing the sustainability of Australia’s troublesome deficit situation, with estimates from last week’s budget projecting a $29.8 billion deficit over the 2014-15 financial year.

David De Garis, a senior economist for National Australia Bank, tells upstart that while these figures do not suggest a budget crisis, the nation’s spending habits are problematic and require corrective action sooner rather than later.

“Australia rates towards the bottom of scale as far as AAA economies are concerned when it comes to deficit action,” he says.

“Therefore it is prudent to make changes now, particularly now that we have new programs of big spending coming into play over the next few years such as the National Disability Insurance Scheme.”

During the period from 2007-2013 government spending outgrew economic growth by 13 per cent, taking expenditure to 26.2 per cent of GDP during the 2013-14 financial year.

Social security and welfare accounted for approximately one third of these expenses at $140.5 billion. The age pension alone cost $36 billion on top of $72 billion worth of assistance to the unemployed, disabled and families. By way of comparison, defence expenditure accounted for only $22.8 billion.

What’s more is that social security expenses are projected to grow by a further 8.1 per cent before the measures announced last Tuesday take full effect from 2017, bringing the total to more than $169 billion.

With spending patterns like these, it is not overly difficult to see why the treasurer has cut so deep in order to reach a goal of reducing the deficit to $2.8 billion by 2017-18.

But this still does not quite explain whether such heavy-handed austerity is needed to balance the books.

Mr De Garis says that any improvement in the financial situation will still depend upon several variables, including the outcome of the 2016 election, the effects of any more substantial policy changes in forthcoming budgets, and continued growth of the economy.

“There’s still a lot of water to go into the fridge yet,” he says

“There is uncertainty surrounding whether this budget can achieve its required results and given the drastic measures that have been taken, this could be why people have reacted so negatively to it.”

On top of this, the government has given no indication that it is planning to axe its equally costly program of superannuation tax concessions. At a cost of around $33 billion, similar savings could be achieved without the significant social hardship associated with cuts to welfare.

Therefore it is no wonder that the electorate is sceptical of the necessity of such a harsh budget, particularly when the likely outcome of many of its measures is increased inequality.

In its annual report, the OECD has found that the rate of relative poverty in Australia (14.4 per cent) is higher than the 11 per cent average of other OECD nations.

Furthermore, The Age claims that the top 20 per cent of households control up to 62 per cent of the nation’s wealth, whilst the bottom 10 per cent control less than 1 per cent.

In a study conducted by the National Centre for Social and Economic Modelling (NATSEM), as many as 1.2 million low income families could lose up to 15 per cent (or $3000) of their total disposable income by the time the bulk of the cuts to Family Benefit Tax B take effect by 2017-18.

The fact that such changes are likely to have very little impact on Australia’s wealthy is also unlikely to sway feelings about the benefits of this year’s budget.

A Fairfax report has revealed that persons earning more than three times the average wage can expect to lose as little as 0.9 per cent of their disposable income, with childless couples on $360,000 annually to lose virtually nothing.

Add to this the fact that consumer confidence is now at its lowest level in three years and it is easy to see how hard it is to justify a budget that threatens many Australians than it does benefit, even in the long term.

Mr De Garis agrees, adding that increased unemployment could also be a possible carry-on effect from such tough budget measures.

“The economy is not growing at a fast rate right now,” he says.

“If the budget withdraws too much cash from the economy in the next one to two years, there’s a risk that more people could find themselves out of work.”