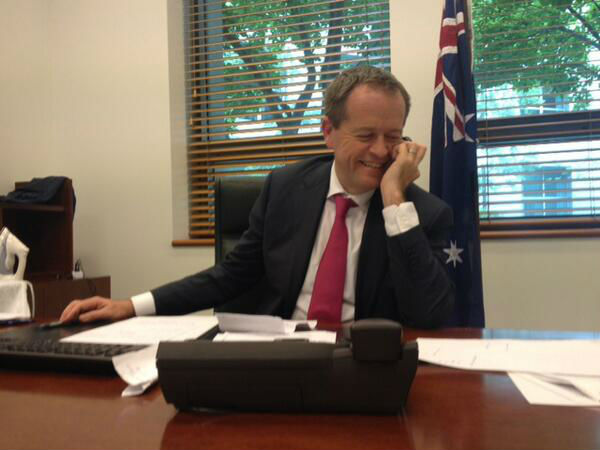 “Tell him you like his new haircut. It looks good. Change of image.”

While travelling out to Melbourne’s west for one of the earliest stops of Bill Shorten’s campaign for the Labor leadership, a friend sent me the above text message.

While a healthy degree of sarcasm was emitted in the text, the then-candidate’s spiffy new do was indicative of a greater remodeling needed before a Labor leader could be capable of winning back The Lodge in 2016.

Bill Shorten has an image problem; the type capable of derailing any run at becoming Prime Minister.

The new Labor leader won the contest after receiving 52 per cent of the combined vote of caucus and rank-and-file members, who got a say in the party’s leadership for the first time.

His first task will be to reassure party members dissatisfied with the result, considering how resoundingly he lost the public vote.  It’s a sign of the larger symptomatic issues the Member for Maribyrnong faces.

Moments after Chief Opposition Whip Chris Hayes announced Shorten had beaten Anthony Albanese, pundits and the public were already harking back to his role in the removal of two sitting Labor prime minsters.

He won't. RT @daveyk317: @johnb78 shorten is tainted by Rudd Gillard Rudd fiasco. How will he overcome this?

Rightly or wrongly, much of the blow-back from the ALP’s recent turmoil has splattered across Shorten.

No federal Labor member was dragged through the mud more than the freshly-minted leader over the course of the party’s unprecedented uncertainty, which culminated in his infamous red-eyed address from within the bellows of Parliament House in July, sealing Julia Gillard’s fate by throwing his 11th-hour support behind Kevin Rudd.

In the wake of helping oust Gillard, Shorten spoke of how hard the decision was to make, and lamented the fact it had cost him “lifelong friendships”.

But how he was perceived never changed, as many chose to buy into the cartoonish portrayal of Shorten as a political, knife-wielding villain.

And much of the public seem to have already made up their mind in regards to his influence in the respective evictions. The Herald Sun went as far as to dub the party powerbroker “Bill the Knife”.

Make no mistake, this caricature-esque image of the new Labor leader will be weaponised by the Coalition government at almost every turn, attempting to project the ghost of Shorten – and Labor’s – past into the future.

Libs plan to exploit the crap out of the whole stabbed two Prime Ministers line of attack. Shorten's task is to remake his image #auspol

If the Coalition is successful in tearing down the character of a man who was instrumental in developing worthy causes like disability and education reform, Labor may as well start preparing the ballots for a 2016 vote to determine who’ll lead the party in opposition for another term.

On Sunday evening, as Shorten and his supporters – including the 55 of them in caucus – basked in the glow of his ascension, many media outlets were already pushing the aforementioned narrative.

Whether or not he can shed the image and stigma associated with being a “kingmaker” or the perennial “faceless man” will have the greatest impact on his success as an alternative prime minister.

First call to mum and the kids to tell them I’m new Labor Leader #thisislabor pic.twitter.com/npxDhnvbK1

On countless occasions during the process that saw him become Labor leader, Shorten insisted the vote was decided upon substance rather than personality.

Such noble intentions have to be forgotten now he’s assumed the mantle of leader.

In the case of Shorten, this could cost him an election if both remain unchanged.