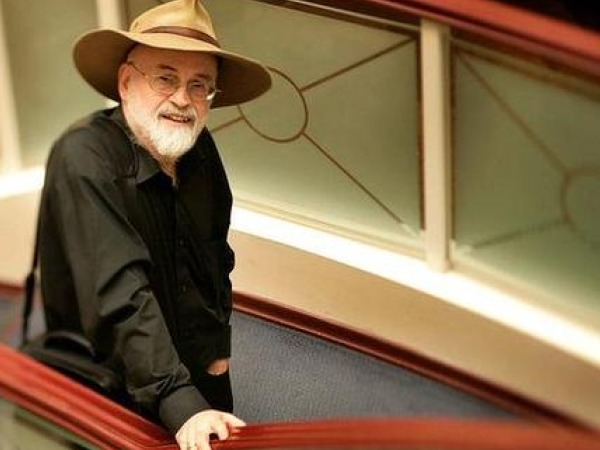 For Sir Terry Pratchett, death was never a villain. It’s just sad he had to go early.

Pratchett, a self-described “professional morbid bastard”, passed away yesterday. Transworld Publishers said the 66-year-old was at home, surrounded by his family and with a cat asleep on his bed.

Pratchett wrote over seventy novels and was knighted for services to literature in 2009. His books were sold in tens of millions and in the early 2000s he was Britain’s second most-read author.

His most well-known work, Discworld, is a comical and satirical fantasy series that spanned forty books, thirty years and seemingly thousands of characters. It has been translated into 37 languages and can be found sprawled across library shelves all over the world.

Like many of my classmates, I was introduced to the strange city of Ankh-Morpork while hiding in the nooks of my local library. Once their collection had been exhausted I developed a habit of being left behind in bookshops, stuck trying to decide which book should be read next.

The grand scale of the series meant it felt like you were dipping into a complete world every time you picked up another book. There were different cultures and histories, and everything was wrapped together with jokes and running gags and placed on the back of a giant turtle.

Pratchett created another world when he co-authored the cult favourite Good Omens with friend and fellow writer, Neil Gaiman. Gaiman was one of many to pay tribute to Pratchett.

“There was nobody like him. I was fortunate to have written a book with him, when we were younger, which taught me so much,” he wrote on his website.

Pratchett wasn’t a stranger to Death.

Death made an appearance in nearly every Discworld book. He was complete with spooky eyes and a scythe – a classic Grim Reaper. However, in typical Pratchett fashion, this personification of death was rarely the antagonist.

Death accepted his role, but it wasn’t his entire character. As the series went on he became sympathetic towards people. His uncanny and often hilarious attempts to imitate humanity and his wry observations about the nature of human life made him a fan favourite; albeit one that is difficult to explain to friends who haven’t read Hogfather and imagined Death sincerely pretending to be Santa Claus.

Appropriately enough, it was Death who announced Pratchett’s passing to the world.

Terry took Death’s arm and followed him through the doors and on to the black desert under the endless night. — Terry Pratchett (@terryandrob) March 12, 2015

Pratchett refused to vilify death in his own life. He was an advocate for assisted suicide, arguing that critically ill people should be able to choose how they died.

While part of his advocacy was due to watching his father die slowly in hospital, Pratchett also didn’t want to let his rare form of Alzheimer’s beat him. He gave a lecture on assisted suicide in 2010, saying:

“(I) vowed that rather than let Alzheimer’s take me, I would take it. I would live my life as ever to the full and die, before the disease mounted its last ­attack, in my own home, in a chair on the lawn, with a brandy in my hand to wash down whatever modern ­version of the “Brompton cocktail” some ­helpful medic could supply.”

Pratchett’s publishers say he died of natural causes following a chest infection and complications caused by his dementia.

Many of Pratchett’s fans have taken to social media to express grief and condolences for Pratchett’s family. Among them was British prime minister, David Cameron, who said:

“Sad to hear of Sir Terry Pratchett’s death, his books fired the imagination of millions and he fearlessly campaigned for dementia awareness.”

The outpouring of grief on Twitter shows how Pratchett will be missed.

People are petitioning Death to bring back Terry Pratchett. I think he would have loved this https://t.co/ACFF8XqhE9

“It’s not worth doing something unless someone, somewhere, would much rather you weren’t doing it.” RIP the brilliant Terry Pratchett.

I am devastated to learn of Terry Pratchett’s death. He brought me so much joy over so many years.

Personally, I will miss the humour, the sly references, and every play on words, but I will also miss the gentle way Pratchett pushed me to think more about our world, and find more of the tragedy and the humour in it.

But it’s not the end.

While Pratchett is now gone, he worked to ensure his characters, cities and worlds will live on. Before he passed away he gave his daughter Rhianna permission to continue writing the Discworld series.

“The Discworld is safe in my daughter’s hands,” he told the New Statesman.

I can believe him.

Erin Leeder is a third-year Bachelor of Journalism student and the Culture and Lifestyle Editor for upstart. She once told a bookshop assistant that she “loved Death” a bit too loudly and received some strange stares. You can follow her on Twitter: @155erin.