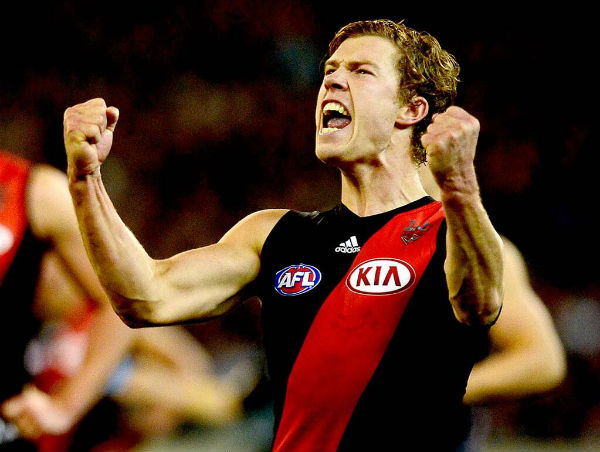 Dons scrape home in a thriller

The backbone of Essendon’s season, in which it has cemented a top-four spot for the time being, has been the ability to win big matches. Friday night was no exception, storming back from 31 points down to beat Carlton by under a kick.

Often maligned midfielder Jake Melksham was the unlikely hero for the Dons, racking up 21 possessions and kicking three goals, including the match winner with less than two minutes on the clock.

The Blues had stormed clear thanks to five first-half goals from Jarrad Waite. He finished with seven for the match, however had a clear lack of help from Carlton’s other forward options.

Essendon, amid the long running performance enhancing drugs controversy, has now beaten all of its traditional rivals – Carlton, Collingwood and Richmond – and look a genuine finals threat if it can retain consistency.

A different variation of the choke

North Melbourne’s done it again. Except this time, things are worse for the Kangaroos.

For the fifth time this season, North surrendered a big lead, with Gold Coast overturning a 31-point deficit early in the second term, to win by 15 points. In wet conditions, the Suns produced a staggering second-quarter effort in which they notched 23 unanswered inside 50s. All after only managing one behind in the first term.

Credit where credit’s due, Gold Coast was fantastic. However the result reflected a sorry tail for North Melbourne. In torrential rain, a five-goal lead – regardless of how far into the match it came – should have been enough for the Roos.

Unlike previous North Melbourne capitulations, this one didn’t come late in the match. Where before North’s on-field leaders were questioned for not steadying the ship, this time the spotlight could lay firmly on coach Brad Scott. A five-goal to one second term saw Gold Coast hit the front before half time. Scott had the entire long break, plus three quarter time, to rectify problems and think of a solution to halt the Suns’ momentum. He was unable to do that.

Now at 4-7 and below Gold Coast on the ladder, North’s finals chances are hanging by a thread.

Eagles back in finals contention

West Coast resurrected its chances of playing into September after a gritty four-point win over St Kilda on Sunday evening. It was hardly a glamorous affair, but the Eagles did the job, despite missing key forwards Josh Kennedy and Mark LeCras.

West Coast trailed for the majority of the match, however when Leigh Montagna missed an easy shot on goal from 15 meters out, and with two Saints forwards screaming for a handball in the goal square, the tide turned.

From the kick-in, the Eagles went route one. Shannon Hurn bombed long, Matt Rosa kicked into space and Eric MacKenzie ran into an open goal. It was as simple as you like.

Following the result, West Coast ends the round in eighth spot with Richmond still a chance to jump the Eagles come the end of the bye rounds.

One out of four ain’t bad

It is. Unfortunately for Melbourne fans, one quarter of effort will never get you a victory, or in this case respect either. The Dees found that out the hard way in the traditional Queens Birthday contest, with Collingwood running rampant and winning by 83 points.

Melbourne put up a contest in the first term, leading in all of the major statistical categories and only trailing by a point at quarter time. Although still a pipedream, many believed this could be the turning point for Mark Neeld’s men.

A six-goal to nothing second term ended Melbourne’s chances, and allowed Collingwood to skip away. Dane Swan, Scott Pendlebury and Luke Ball all racked up in excess of 30 possessions as the Pies restricted Melbourne to its second lowest scoring output for the year.

If Neeld was hanging by a thread following last Monday’s board meeting, surely now the signs of life are growing all the more dim for the coach of Melbourne.

Player of the Week – Gary Ablett

If ever you need an example of one man willing his side to victory, it was Gary Ablett against North Melbourne on Saturday night.

Amid treacherous conditions on the Gold Coast, Ablett racked up 33 disposals (20 contested), had seven clearances, five tackles, seven inside 50s and kicked two goals. It was a truly herculean performance from the Suns skipper.

His efforts in the wet were inspirational and they helped Gold Coast overturn a 31-point deficit early in the second quarter.

Ablett is now well and truly the man to beat for the 2013 Brownlow Medal.