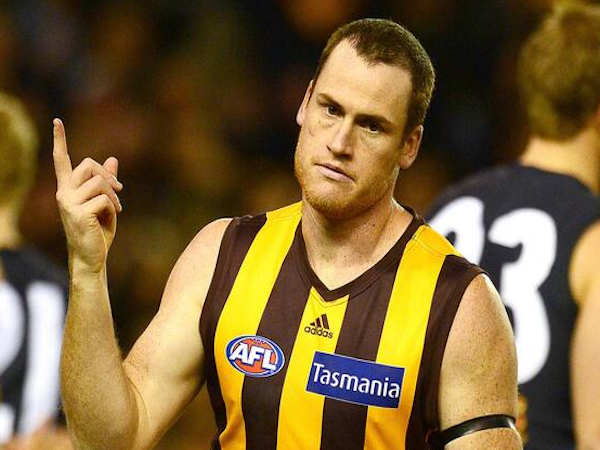 All eyes may have been on Buddy Franklin on Friday night – after speculation regarding his ongoing contract saga arose again. However, it was his partner in crime, Jarryd Roughead, who stole the show in the Hawks’ 20-point win over West Coast.

As has so often been the case throughout 2013, Roughead flew under the radar to rack up 20 disposals and boot five goals in a dominant display. The haul now sees Roughead move within three goals of Coleman Medal leader Josh Kennedy and three goals clear of teammate Franklin.

Roughead may not have the star attraction of Buddy, but his ability to play in a variety of positions – including forward, in the ruck and in the midfield – makes him all the more important to Hawthorn’s premiership charge.

Maybe Greater Western Sydney is offering $2 million a year to the wrong man.

Not worth the wait

It seemed a dream return to football for new Swan Kurt Tippett; a goal inside a minute of his Sydney debut and a second soon after had Swans fans believing the key forward would add another dimension to their hunt for back-to-back premierships. However, Port Adelaide spoiled the Swans’ party in one of the season’s greatest upsets.

Tippett moved to Sydney from Adelaide at the end of last season for a reported $1 million a year. However, after serving an 11-match suspension for salary cap breaches at the Crows, he lacked match fitness and only had one disposal in the second half.

The Power trailed at every change but kicked five goals to two in the final term to storm to an 18-point win over the hot favourites Sydney.

Richmond’s 60-point victory over the Bulldogs on Saturday night went a long way to once again silence their critics. Although a win was expected for the Tigers, it was the performances of their second-tier brigade that had many praising the depth of Damien Hardwick’s men.

While the likes of Trent Cotchin, Brett Deledio and Dustin Martin didn’t particularly stand out, those often on the outer at Punt Road – Bachar Houli, Daniel Jackson, Reece Conca and Shaun Grigg – stood tall in the commanding performance.

One worrying aspect from the victory was a knee injury to Troy Chaplin. With the defender earning praise throughout the season for helping to steady an often unreliable Tigers backline, any potential absence could once again test Hardwick’s troops.

However, they’ve managed to overcome all challenges thrown at them thus far. You wouldn’t put it past them to do it again.

Ash McGrath proved the hero in his 200th game, as Brisbane miraculously came from 52 points down to overcome Geelong at the Gabba on Sunday evening. McGrath goaled after the siren from over 50 meters out to hand the Lions a sensational and unlikely five-point win.

Brent Maloney was the hero for Brisbane in the final term, amassing 11 disposals and booting two goals in the quarter, to inspire the Lions to record the eighth biggest comeback victory in AFL/VFL history.

Daniel Rich was also impressive, racking up 25 disposals and kicking two goals, including the leveling major late in the last term.

However, it was the final scoring chain following Tom Hawkins’s behind that won Brisbane the match. Simon Black showed fantastic composure to find a target, before Dayne Zorko drilled a nice pass to McGrath on the 50-meter arc with less than two seconds remaining. The rest, as they say, is history.

It proved a solemn day all round for the Scott brothers, with Chris’s Geelong losing just hours after Brad’s North kicked only four goals in a 38-point loss to Fremantle.

Player of the Week – Simon Black

In his record-breaking 320th appearance for Brisbane – his first at the Gabba since becoming the club’s highest appearance maker – 34-year-old Simon Black was inspirational as the Lions came from 52 points down to beat Geelong on Sunday night.

Black was sensational, finishing with 33 disposals (20 contested) at over 75 per cent efficiency, five clearances and five tackles.

But most impressively was his ability to influence Brisbane’s eight-goal to one final quarter and change the course of the match. The veteran managed 12 disposals (half were contested), two clearances and two rebound 50s in the final term as the Lions ran over the top of Geelong.

It’s 320 not out for Black and it’s an incredible career that hardly looks close to finishing.