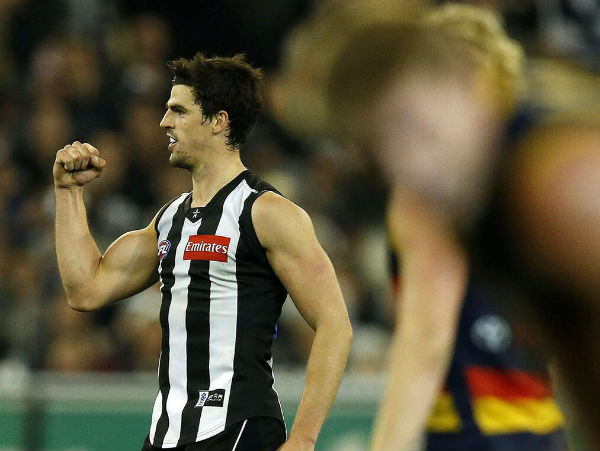 Pies duo light up the ‘G

When Collingwood was tested by Adelaide on Friday night, two men stood taller than the rest – Scott Pendlebury and Dane Swan.

Again and again, a brave Crows outfit attacked the Magpies, however the silk and class of Pendlebury and the gut-running and work rate of Swan repelled any danger of an upset.

Their performances on Friday night just about assured their position as the AFL’s best midfield duo. Pendlebury accumulated 42 possessions, Swan 31. It was the fourth time in five games that both have had 30+ disposals, the 36th time overall. Remarkably, Collingwood has an 89% win rate when this happens.

They look an ominous prospect coming into the backend of the season.

In their previous two meetings in Cairns, the Tigers had suffered two losses to the new boys of the AFL. However knocking off another landmark, Richmond consolidated their spot in the top-eight despite only kicking six goals for the match.

It was a game Richmond desperately needed to win.

After suffering a poor loss to North Melbourne last week, question marks began to rise once again at Punt Road. It was also the type of match where Richmond fans wouldn’t have been surprised to have a slip up in the past.

But, the Tigers did the job. They weren’t at their best, but good teams find a way to win when they’re not playing well. Richmond may just be building to be a good team.

A 52-point turnaround against Geelong two weeks ago had given Brisbane a name for themselves as the comeback kings of the AFL. Five losses from clearly winnable situations had given North Melbourne the label of “chokers.”

When the two sides met on Saturday night, you could predict what would happen from a mile away.

The Kangaroos raced out to a 33-point lead late in the third quarter, before the Lions kicked six straight goals to hit the lead early in the final term. From there, it was anyone’s game. But Brisbane had the mental strength over their fragile opponents.

The Lions kicked four of the last five goals to seal a miraculous 12-point win and heap even more pressure on North coach Brad Scott.

Roos fans were calling for Scott’s head late on Saturday night, however whether the club has the financial capacity to do so after signing him to a four-year deal in the summer remains to be seen. Furthermore, questions must be asked of a North board that signed up their coach in the off-season, despite the club only making one final under his guidance.

There were two rivalry matches on Sunday, with Sydney taking on GWS in the ‘Battle of the Bridge’, while Fremantle met West Coast in the ‘derby’.

Despite trailing late in the first term, Sydney overcame their early yips and slaughtered the Giants by a whopping 129 points.

Luckily for neutrals, a much better contest was being played out west, where a six-goal to three final term was enough for Fremantle to withhold the constant West Coast fightbacks in yet another feisty western derby.

The Dockers were made to earn their victory, trailing by two points at the final change, but Ross Lyon’s men stormed home to record their 12th derby win in the last 16 outings against West Coast – an impressive record to say the least.

Player of the Week – Scott Pendlebury

When a player of Scott Pendlebury’s ilk has the widely acknowledged “best game of his career”, you know you’ve witnessed something special.

That’s what Collingwood fans were treated to in the Pies’ 27-point victory over Adelaide on Friday night.

Pendlebury amassed a staggering 42 possessions (16 contested), the first time in his illustrious career that he has gone over the magical 40-disposal mark, running at an impressive 73.8% efficiency.

In amongst those disposals were eight clearances, eight inside 50s and five tackles. He also finished with two late goals to add even more polish to a sublime display.

Pendlebury may just add a Brownlow medal to his gradually growing count of Player of the Week nominations.