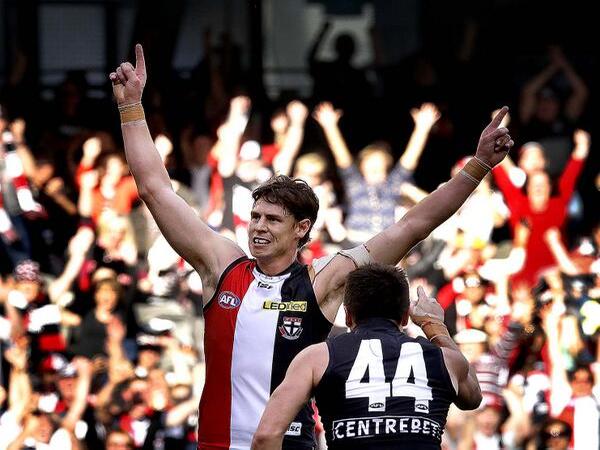 Buddy in the headlines as Hawks seal minor premiership

Hawthorn came from four goals down to avenge its 2012 Grand Final defeat and seal the minor premiership against Sydney on Friday night. However, once again it was Buddy Franklin who stole the headlines for his big bump on Swan Nick Malceski.

Buddy’s hit was high and late, and left Malceski dazed. The bump could mean that Hawthorn’s most pivotal player may miss out on the first week of finals.

However, with four Jarryd Roughead goals against Sydney, handing the Hawk his first Coleman Medal, Buddy’s potential absence is certainly not a death sentence for Hawthorn.

The two sides will meet again this week in the first qualifying final at the MCG.

Brave Brisbane a point away from causing September headaches

Nobody saw it coming. Brisbane was a solitary two points away from defeating Geelong at Simonds Stadium, which would have momentarily jolted the club inside the top eight on Saturday afternoon.

The Lions kicked six goals to three in the final term, getting to within two points before Ryan Lester’s snap shot, with just five seconds on the clock, was touched on the line by Jimmy Bartel.

It was heartbreaking stuff for a drastically improved Brisbane side, who would have forced Carlton into a do-or-die playoff match against Port Adelaide, later that the day.

The Cats will return to their heartland next weekend to face Fremantle, in the first ever final to be played at Kardinia Park.

Carlton fought from 39-points down late in the third quarter to defeat Port Adelaide by a single point, and seal its spot in September on Saturday evening.

Led by two players maligned throughout the season, Marc Murphy and Bryce Gibbs, the Blues kicked eight goals to three in the final term to storm home and set up a mouthwatering elimination final against Richmond next week.

The Blues were outplayed for the first three quarters, playing without effort and going into the final change 29-points down. However, with Murphy kicking two stirring goals in a captain’s quarter, the Blues dramatically turned the tide.

Progressing through to the finals after finishing ninth, Carlton may now have the heart to cause headaches come September.

Roos give a glimmer of hope

It’s been a season of consistent inconsistencies for North Melbourne. However, its loyal fans received a consolation prize of sorts, knocking off Collingwood by 11-points in a thrilling encounter at the MCG on Sunday.

After losing an incredible 11 matches by 15-points or less throughout the season, the Roos held on, repelling Collingwood’s late waves of attacks and giving fans a positive glimpse into what the future holds.

With youngsters Jack Ziebell, Ryan Bastinac and Shaun Atley impressing, North could finally turn into the September threat it hopes to be next year.

Likewise with Brisbane and Adelaide, North can take plenty of positives from the final round and look towards 2014 as a fresh start. Watch this space.

Player of the Week – Jack Steven

Fremantle may have put out half of the Peel Thunder squad, but it should take nothing away from Jack Steven’s incredible performance for St Kilda on Saturday afternoon.

It was a walk in the park for the 23-year-old midfielder, who racked up a staggering 47 disposals in St Kilda’s 71-point victory over the Dockers.

Steven, along with teammate Leigh Montagna, who also accumulated 47 touches, will need to be checked for leather poisoning this week considering the amount of times they each got their hands on the footy.

The Saints youngster also had a 76.6% disposal efficiency with four clearances, four tackles and kicked a goal to go with his amazing possession stats.

Riley Beveridge is a second-year Bachelor of Journalism (Sport) student at La Trobe University. You can follow him on Twitter at @rileybev.

Melbourne’s CBD gets a ‘no-fly zone’ from Victoria Police

Media granted access to get footage only after seeking permission.

She is the 25th captain in the team's history.