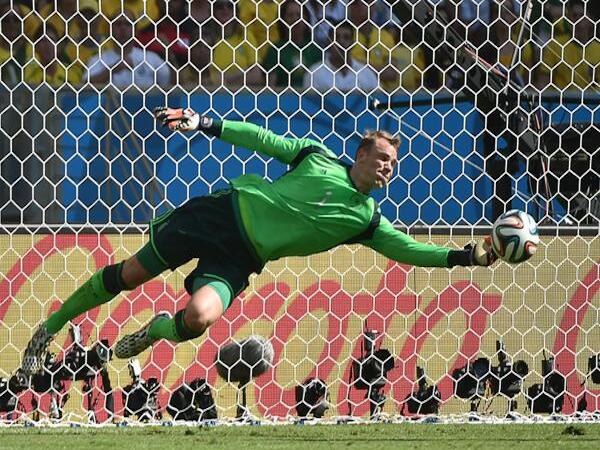 Ask any casual fan about the German national team and who their most important player is and it’s likely they’ll point at midfield maestros Toni Kroos, Mesut Ozil or Bastian Schweinsteiger.

The more experienced supporter might tell you that Miroslav Klose now holds the record for the most World Cup goals ever and Thomas Muller is likely to break that if he continues his freakish goal-scoring streak.

But few will acknowledge the extraordinary talent standing between the sticks who can lay his own claim to being the most influential player in a team full of superstars.

In a World Cup that has been captivated by the performances of Guillermo Ochoa, Tim Howard and Keylor Navas, one is standing far and above them as the best in his position.

Manuel Neuer is, hands down, the best goalkeeper in the world.

In a tournament where more goals were scored than ever before throughout the group stages, Neuer has stood tall and repelled everything that has come his way.

Retweet if you think Manuel Neuer has been the best goalkeeper of the #WorldCup: http://t.co/2izyb8F4XX #WCT pic.twitter.com/6NxVSgJZVu

Of course it helps to have the world’s best midfield running around in front of you and Germany’s do a fantastic job of keeping the ball away from Neuer. In that respect, the monstrous German has a luxury other goalkeepers don’t.

When the Germans have the ball – which is often – Neuer simply wanders around his area, barking orders at his defence. He is a huge man – physically intimidating, at 193cm and with a massive wingspan.

Consider his brilliant save, late in the quarter final against France.

Hanging onto a slim 1-0 lead, forced deep into their own area, the German defence frantically attempted to clear a ball that instead ricocheted around and landed at the feet of striker Karim Benzema.

Seizing his opportunity, Benzema unleashed a furious strike from the edge of the six-yard box, which looked destined for the roof of the net. Enter Neuer.

Displaying the reflexes that have become synonymous with his performance, Neuer stuck his hand straight up, perfectly in line with the ball, deflecting it away. The Germans cleared it; Benzema stood for a second, then shook his head and sprinted away to rejoin the play.

After that game, Neuer was lauded for his quick thinking. In typical fashion, he palmed the adulation off to his defenders and said: “That was just an automatic reaction. If it had gone in, it would have been a goalkeeper’s mistake.”

He started his career at Schalke 04, making 182 appearances for the club before switching to rivals Bayern Munich at the start of the 2011/12 season.

Due to the rivalry between the sides, fans from both clubs booed Neuer, before the Bayern hierarchy engineered a meeting between Neuer, the club and a supporter’s group, which put an end to the animosity.

It cost Bayern €22 million to sign Neuer, fending off competition from England’s Manchester United. He immediately set about paying them back.

Far from being a one-dimensional keeper, Neuer possesses rare kicking skills. Having added this string to his bow, his teammates and coach are quick to praise him at every opportunity.

The German team realise how rare a talent Neuer is. Asked about his multi-skilled goalkeeper, midfielder Kroos called him “Germany’s 11th outfield player”.

Coach Joachim Low compared Neuer’s skills to the rest of the German team and said he could play in the midfield.

Germany’s goalkeeping coach, Andreas Kopke, said his dual threat made him “exactly the type of goalkeeper we want in our team”.

Not only blessed with physical gifts, Neuer’s composure is something he has possessed since his Schalke days. He says a coach there taught him that a “goalkeeper always starts again at 0-0, even if [the score is] 2-0.”

The Germans call it Nervenstärke and its best translation to English is “nerve strength”.

Germany’s own Oliver Kahn is the only goalkeeper to ever win the Golden Ball, the award for the best player at a World Cup. But if the Germans win the 2014 edition, Manuel Neuer might join him.