Football is the spirit of the Mallee region, writes Jesse Robinson. 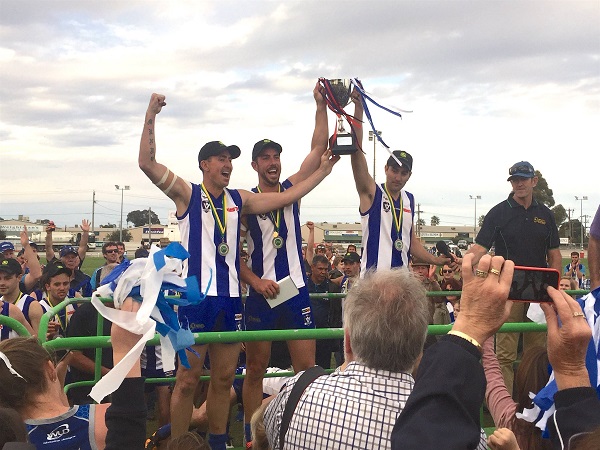 The cheers of the Kangas’ supporters echoed across the entire Mallee region as the final siren sounded at Mildura’s No. 1 oval.

In a fairy tale end to the local football season, the Ouyen United Kangas lifted two premiership cups, the holy grail of football.

But it was only a year ago archrivals, the Ouyen United Demons and the Walpeup Underbool Kangaroos were playing a fierce rivalry game in the now folded Mallee Football League.

During the 2015 season, the clubs received word from AFL Victoria that the league would cease to exist and that the old rivals, should now become one.

Mergers are not new to the Mallee; amalgamation has been crucial to the survival of the league and the region.

With Ouyen and Walpeup Underbool merging, there are now an incredible 43 former clubs merged to form the Ouyen United Kangas.

“This merger is as big and as storied as an Essendon Collingwood type rivalry, two dominant clubs that are neighbours, but that’s only ever on the field,” club president Jarrod Munro says.

The two clubs were faced with the option of merging or potentially ceasing to exist but in the Mallee not playing football was never an option.

The club is so key to the welfare of the regional community, they would do anything to play.

“It wouldn’t have mattered where we had to go, how far we would’ve had to travel, it wasn’t optional,” Munro says.

“We had to have football and netball for our kids, for ourselves and for our community to support each other, we wouldn’t last without it.”

Former Walpeup-Underbool President and Ouyen United Vice-President, Jamie Latta says football is almost like a religion in the Mallee.

“No one goes to church anymore; everyone goes to the footy,” he says.

“Footy is basically the social fabric of the whole community, every Thursday night and every Saturday for 6-7 months of the year, football is our social outlet and without it, there is very little else.

“Down here we’ve had to fight for our survival with dwindling numbers and it’s all hands on deck to make sure we keep this show on the road and the results have been incredible.”

Former club president and 440 game veteran for Walpeup Underbool, Andrew Willsmore has lived his life in footy in the Mallee.

“We were born and bred here and took it for granted how important footy was until we thought we might lose it,” he says.

Willsmore epitomises what it means to be a part of a regional footy club and community.

“I played for 34 years, I’ve been president, vice president, coach, I was in the merger negotiations, you name it, but that’s nothing special, it’s just part of being in the club,” he says.

“I’ve grown up at the club, been playing footy since I was five and I actually can’t imagine a world without it.

“As soon as my little boy could walk I had him down at the club and on the training park, he pretty much grew up on Underbool oval and look at him now.”

Willsmore is referring to his son Dallas, who is now playing for the Hawthorn Football Club in the AFL and Dallas says his country football roots are why he loves the game so much.

“The footy club and the community mean everything to me,” he says.

Dallas Willsmore credits his early introduction to football as a key for his continued rise through the ranks from the regional club.

“Playing in the country has been massive for me, we weren’t a strong side in my time there, we were getting smashed every week and that was character building and challenged me every week to improve on my skills and aspects that have helped me to get to AFL level football,” he says.

“If there wasn’t a footy club for me as a kid, I would’ve been totally lost.”

Vice President Jamie Latta says the huge support stems from a lifetime of commitment from the locals and the social connectivity that builds the community is a platform of success for the club.

“The whole community follows everything from the under 10s right throughout their lives, we are genuinely family based,” he says.

“That’s the way it has to be, the club and the community couldn’t function without each other.”

Like the whole of Sunraysia, Latta still can’t believe that the club won two premierships.

“Before the season I made the prediction that we would win four games, that was a hope more than an expectation. To see what we’ve accomplished and look back at it, it truly is unbelievable.”

The 2016 season in the Sunraysia Football League will be one not soon forgotten.

A premiership in the senior and reserve grades were just rewards for a community that battles so hard to stay afloat.

The Kangas now turn their attention to reloading and proving that they weren’t a one season wonder as they set their sights on the next season of football.

President Jarrod Munro is confident, “We’ll be back, don’t you worry about that.”