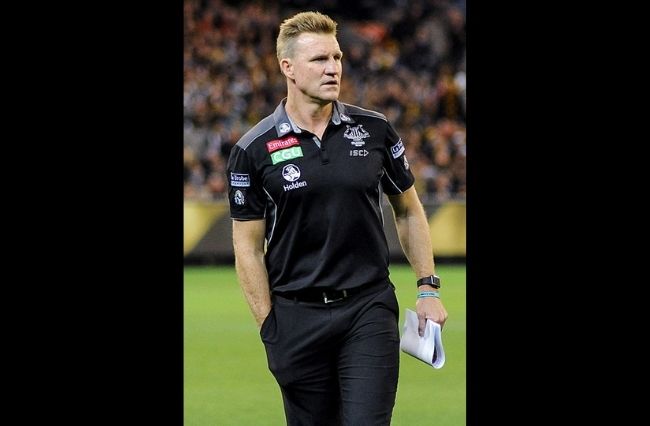 The credibility of AFL head coaches, particularly those of losing teams, is often at the forefront of sports media in Australia. With Nathan Buckley’s recent announcement of his resignation from the top job with the Collingwood Magpies, the intense media scrutiny AFL coaches face when their team is underperforming has been put back into the spotlight.

After 10 seasons, Buckley’s last three campaigns were his most successful. His squad narrowly lost the 2018 Grand Final and 2019 preliminary final, and had an impressive win over West Coast last year in an away elimination final despite a long season in hubs away from home.

This year, with the Pies struggling, Buckley’s head has been on the chopping block in the media, and he made the decision to step down before his contract was due to expire at the end of the season.

“My messages, my manner, the way that I lead is established. We had a general sense it was time for something different, new and fresh. This is the right time,” he said at his exit press conference.

Collingwood’s final four games with Buckley at the helm suggested they were just starting to find some form. They narrowly lost to two top five sides in Geelong and Port Adelaide, and went on to finish the last two rounds with wins over Adelaide and the in-form, top-of-the-ladder Melbourne.

This is demonstrative of the harsh relationship that exists between the media and AFL coaches; is it always fair to solely blame the head coach for a team’s poor performance struggles?

This question is especially relevant in Buckley’s situation, as he just had the best three seasons of his coaching tenure, and his club was in shambles after their 22-year president Eddie McGuire stood down and their football boss, Geoff Walsh, retired.

As a senior AFL reporter for Fox Sports, journalist Tom Morris says, although the media can portray coaches as the root of their teams’ woes, the reasons aren’t always so clear cut.

“It’s rarely all the coach’s fault. But given that the coach is the boss of the organisation, it makes the biggest difference when the coach loses his or her job, and that’s how you can start again,” he tells upstart.

Similarly, former AFL coach Gary Ayres, believes whether it’s wrong or right, if a coach isn’t delivering then there’s every chance they may lose their job.

“It’s a winning and losing environment and that will never ever change,” he tells upstart. “The buck starts with the coach.”

The intense media scrutiny of coaches has long been a part of the AFL environment. In 2019, North Melbourne coach, Brad Scott, was essentially forced to step down after facing continuous criticism, particularly from former North Melbourne player and reporter David King. This was despite coaching the Kangaroos to two prelims and never finishing a season horrendously — aside from 2017, when they lost a lot of their star veterans to retirement.

His brother, and Geelong coach, Chris Scott was recently asked on Footy Classified if he would like to see him ever return to coaching after he had been “vindicated” from the media’s displeasure following the team’s lack of success after his departure from the club.

“No, I wouldn’t because it’s not a very good job to be honest,” he said. “It’s just hard work. It’s a stressful existence. Not many coaches coach for 10 years, he coached for 10 years and a couple of prelim finals with that list I think was a pretty successful outcome.”

Scott’s situation wasn’t too dissimilar to Buckley’s. Buckley’s motivation to coach was questioned multiple times despite him saying he wanted to see out the end of his contract. The Herald Sun also reported earlier this year that some of his senior players had expressed that the club had “little spark” and “little energy”, and that they were considering hiring a new coach to “enliven” the team.

So it’s very possible that Buckley was past his due date at Collingwood, because of a lack of motivation or losing connection with the players. But sometimes reporters may not be taking everything into context. Ross Lyon argued on Footy Classified, that the report on Buckley wasn’t backed up with “rigour”, saying any team that is losing is going to have players that feel “disaffected”, and that they had also suffered some injuries.

Speaking from experience, Ayers says that when a coach’s team is winning, they don’t receive nearly as much airtime in the media as they do when they are losing.

“The winning side of it is such a wonderful feeling but it doesn’t last anywhere near as that awful feeling as when you lose and keep losing,” he says. “It’s the way of what we do in relation to writing these stories or reporting these stories. They probably sell more when it’s not going well than when they do when it is going well.”

Ayers believes that the scrutiny that comes with a losing side can have an impact on everyone involved.

“It is a flow on effect. Everyone feels it. The coach has an emotional attachment to his role, he can’t physically do what the players do, and then of course there’s a flow on effect to your family,” he says.

While the media certainly has a significant role within the AFL community, they alone cannot be held responsible for getting coaches sacked. However, it is clear that they can definitely influence a club’s overall decision.

“I don’t think the media is ever entirely responsible for a coach losing their job,” AFL reporter, Tom Morris, says. “But there’s absolutely no doubt that media pressure, when it builds up, can make boards and CEO’s more agitated and more likely to change their coach when they feel like there’s no other option.”

But quite simply, analysts are paid to analyse, and with Australia’s sport media landscape being so diverse, the discussions are as loud as ever, and coaches have to be prepared for what they are signing up for.

“There’s more footy shows, more papers, more podcasts, more interviews, and obviously it’s such a unique and interesting industry, so they have to be aware that it’s pretty much part and parcel of their life,” former AFL coach, Gary Ayers, says.

“You’ve got to be able to understand and deal with the reality of it. Everyone in this world is being given feedback in one way or another, and it takes a very strong character to be able to absorb that, take it on, and move on whether it’s good or bad.”

Morris agrees that AFL coaches have to be know they will constantly be under the microscope.

“All the scrutiny coaches receive, even though it’s extremely difficult at times, is warranted given how important the position is in the organisation,” he says. “It doesn’t mean that the judgement they receive is easy on them. It doesn’t mean that it’s a job that’s enticing to everyone.”

Ultimately, coaches will always be the first person that the media, the club and the fans will look at when a team is underperforming. Whether the criticism is fair or not, whoever decides to take on that responsibility has to be prepared to be somewhat of a scapegoat, and know that their job may be on the line when their team is losing.

“It’s a brutal job, it’s a ruthless job, and it’s an acquired taste. It’s only for a certain few people,” Morris says.

Article: Ashton Tresidder is a third-year Bachelor of Media and Communications (sports journalism) student at La Trobe University. You can follow him on twitter @ashton_tres

Photo: By Flickerd is available HERE and is used under a creative commons license, no modifications have been made.