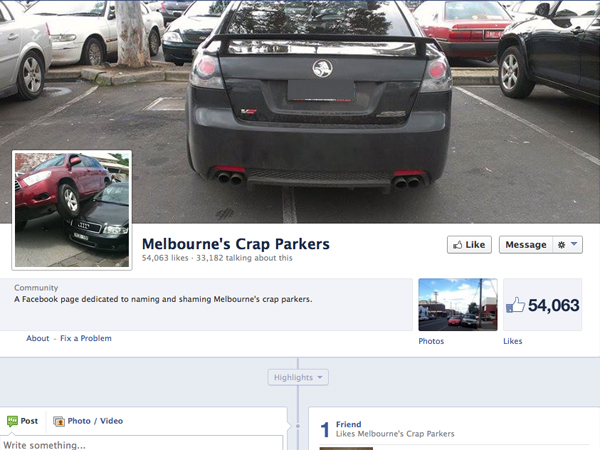 As social media has evolved, so have the many ways to trash other people for fun. While it’s not as bad as trolling — which has received front page news coverage — some comments on the name-and-shame pages and sites are starting to cross the line.

One example is Melbourne’s Crap Parkers, a Facebook page that unashamedly encourages motorists to take photos of illegal and, in many cases, incomprehensible parking behaviour.

One of the page’s founders, “Steve”, says the idea came from a similar page developed interstate. Melbourne’s Crap Parkers has already gained over 53,000 Facebook “likes” since its creation on June 3.

Of the many photos uploaded on the page, very few have had their number plates blurred or altered. The site’s administrators are even helpful enough to highlight where the photo have been taken.

Steve says shaming people on social media is satisfying because there are real-life benefits.

“When [people] comment on a picture of their own car and they’re angry or defensive,” he says, “they read the comments and know they were an idiot, and hopefully think twice before being lazy or stupid again.”

Melbourne’s Crap Parkers’ key purpose is to allow people to vent their everyday parking frustrations while having a laugh. However, it has also encouraged the negative behaviours we’ve come to expect from online anonymity.

Steve is quick to point out that this was not the creators’ intention: “we make sure we do not incite violence or radical vigilantism on our page.”

Many Facebook commenters cling to the stereotypes and play “guess the nationality.” However, other users take it much further.

Commenting on a photo showing a car parked across a walkway, one user said, “I would honestly have kicked or keyed that car a few times when nobody was looking.”

The above comment typifies what is so worrying about some of the comments on name-and-shame pages. The idea of doing something bad or illegal “when nobody is looking” is eerily similar to being mean from behind the screen – because we can.

Dr Helen Lee, Professor and Head of Department of Sociology and Anthropology at La Trobe University, believes the trend of online shaming is something we should all be concerned about.

Dr Lee agrees this sort of behaviour is fuelled by online anonymity.

“People can hide their identities in social media, they often express opinions that they do have in real life, but they wouldn’t express in real life because of social sanctions.”

Professor Lee also adds that people are constantly trawling the internet for novelty and humour and, as Melbourne’s Crap Parkers shows, it is often at the expense of others.

Moreover, she proposes that the convenience of digital technology can affect thought processes and general courtesy of those involved.

“It’s so much easier to take a photo with your mobile phone and upload the photo in an instant and because of that, people don’t really stop and think about the consequences.”

In the rush to upload content and have a laugh, we’re ignoring the fact that some people are taking it much further than that. Without effective moderation on these types of pages, things can quickly turn ugly.

New media platforms should be used to connect and inform, not to humiliate.

Social media platforms and page moderators need to take responsibility for the content they choose to publish. Perhaps if closer attention was paid to the comments on these sorts of “shaming” pages, the discussions wouldn’t become quite so vitriolic.

It’s difficult to stop people from enjoying the satisfaction that comes from naming and shaming – especially where crappy parking is concerned. However, attention needs to be paid when it skates the thin line between commenting and trolling.