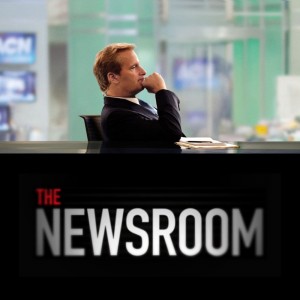 Will McAvoy (Jeff Daniels) is a respected and popular news anchor for cable news network, ACN. He’s risen to the top of the nightly news game by making the most of his charm, while avoiding taking ideological positions that might lose viewers. After a public breakdown, in which he goes on a tirade about why America is in fact not the greatest country in the world (heresy!), Will is forced to take vacation by network honchos.

Upon his return McAvoy finds that his executive producer is leaving his nightly news program for another on the network, and taking disgruntled staff with him after years of poor treatment. Even worse, Will discovers, is that his new EP is in fact MacKenzie McHale (Emily Mortimer), former war correspondent and McAvoy’s ex-girlfriend.

Their murky past is only alluded to, but she, along with grizzled veteran news head, Charlie Skinner (Sam Waterston), manage to convince McAvoy to turn a new leaf in his career. No longer will he go out of his way to avoid offending viewers. Reporting the truth is all that matters now.

And so begins Aaron Sorkin’s new drama, The Newsroom.

Following a well-received stint writing for the big screen (notably The Social Network and Moneyball), Sorkin has returned to pick up where he left of with The West Wing. The Newsroom delivers a similar sense of idealism to an industry that to many, is lacking just that.

‘In the old days… we did news well. You know how? We just decided to,’ Skinner tells McAvoy in the first episode. This is the way the news should be, Sorkin is telling us; free of soft-ball questions and pandering insignificant segments.

If you were put off by the indulgence of The West Wing’s moralistic speeches, or its portrayal of politicians as principled do-gooders, then you probably won’t find much to like in The Newsroom. The fact that the program covers real-life events, such as the Deepwater Horizon oil-spill in the first week, may further alienate viewers. It’s as if Sorkin is saying: ‘if only the media had covered things like this.’

However, there is something inescapably endearing about McAvoy and his supporting staff. Skinner in particular is entertaining as the rambling yet pure-of-heart alcoholic news head.  While there is at times an air of intellectual superiority, for the most part The Newsroom manages to deliver its message with a sincerity that manages to make up for most of its shortcomings.

Sorkin’s writing is earnest enough to avoid being grating, and for the most part, his dialogue is snappy and genuinely interesting. On the negative side, an office love-triangle is signposted, and it appears likely that The Newsroom will see McAvoy predictably outgrow his bitter narcissism to redeem himself to his staff and the world. But I’m curious to see how he and his team will deal with major news events in the coming weeks.

The show may not be perfect, but it brings a positive message. It feels like every political journalists dream to be able to cover important issues without worrying about ratings or offending people.

When MacKenzie is asked what she wants to achieve with McAvoy’s show she replies: ‘Reclaiming the fourth estate. Reclaiming journalism as an honourable profession. A nightly newscast that that informs a debate worthy of a great nation.’

Yes, it’s cheesy. But if you want a glimpse into a news world where intelligence is worshipped over corporate sponsorship, and stories are assessed based on national importance not popularity, look no further than The Newsroom. It may not get everything right, but it shows promise and charm that definitely warrant giving it a chance.

The Newsroom can be viewed weekly on SoHo, Mondays at 8:30.