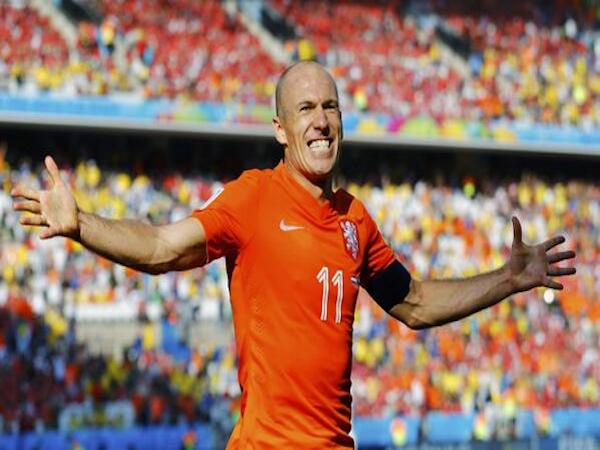 All of a sudden, it all opened up for the Dutch.

For a side seemingly caught in transition entering the 2014 World Cup, the Netherlands now have what could best be described as a rather routine passage through to the semi finals.

Three wins from three in Group B, despite not always being at their scintillating best, saw Louis van Gaal’s side qualify for the knockout stages as group winners.

Plucky underdog stories in three other groups – including Mexico trumping Croatia, Costa Rica surprising everyone in the supposed ‘Group of Death’ and Greece overcoming the Ivory Coast – now means that the Netherlands have a more simple task in reaching the final four than they ever could have imaged.

They will face Mexico, a side who only qualified for the World Cup by the skin of their teeth, in the round of 16. Win that game and they will come up against either Costa Rica or Greece in the quarter finals.

None of the three are by any means guaranteed victories, but for the knockout stages of the World Cup they are relatively straightforward encounters.

7 TRUTHS: Why Arjen Robben is the player of the World Cup so far. https://t.co/8jGDsXnWFb #NED pic.twitter.com/DIqc8NVs9c

Compare that to what could have been had they lost their final group game to Chile, where challenges against Brazil and then fellow South Americans Colombia or Uruguay met the team who finished second in Group B. Navigate them, which appears unlikely in the first place, and the likes of France and Germany might still remain in the final four.

If you were to offer van Gaal this opportunity prior to the tournament beginning, he might have snapped your hand off. For the most cautious of Dutch fans, they might have done so had you only offered them a place in the round of 16.

A squad that featured experienced but ageing top-end talent in the front third, combined with a young and inexperienced defence, was expected to have a short stay in Brazil.

This was a view further enhanced when they were drawn into a group featuring reigning World and European champions Spain, as well as the up-and-coming Chile.

van Gaal, who had been poached by Manchester United before the tournament began, wouldn’t be around to oversee the completion of the transition and there were rumours abound that potentially the Netherlands were in a state of limbo.

When they went 1-0 down to Spain in their opening group match, flashbacks of the 2010 final could have sent them to the verge of self-destruction. But how quickly things can change.

Robin van Persie struck that memorable stooping header on the stroke of half time and from there, the Netherlands have never looked back. Arjen Robben and van Persie have been lethal up front, while the likes of Jonathan de Guzman and Nigel de Jong have impressed in midfield.

Defensively is where van Gaal has best shown his highly rated versatility. Against Spain he opted for a back three with Daryl Janmaat and Daley Blind bombing down the flanks. But against Australia and Chile, who both play wide and expansive football, he chose a more conservative back four and attacked mostly on the counter.

In doing so, credit must also be paid to the likes of Ron Vlaar, Stefan de Vrij and Bruno Martins Indi, whose versatility and defensive nous have been fantastic thus far.

The team did what they needed to against Australia, barely getting out of second gear in a 3-2 win. Against Chile, in the knowledge that the South Americans needed a win to go above the Netherlands on the Group B table, they sat back and carefully chose their moments to pour forward.

Furthermore, van Gaal has found quality in depth on the bench that many thought the squad was perhaps lacking pre-tournament.

Memphis Depay has twice come on and found the back of the net, while Leroy Fer struck the crucial goal against Chile after being brought on just two minutes earlier.

While nothing is guaranteed for the Dutch, particularly in a World Cup where the next upset always seems just around the corner, van Gaal and his troops couldn’t have asked for a better draw through to the semi finals.

Mexico, Costa Rica and Greece have the potential to surprise, as has already been showcased at this World Cup, but the Netherlands squad will be confident their significantly greater quality should see them through to the final four – and with considerable ease.

Who thought we’d be saying that before a ball was kicked in Brazil?