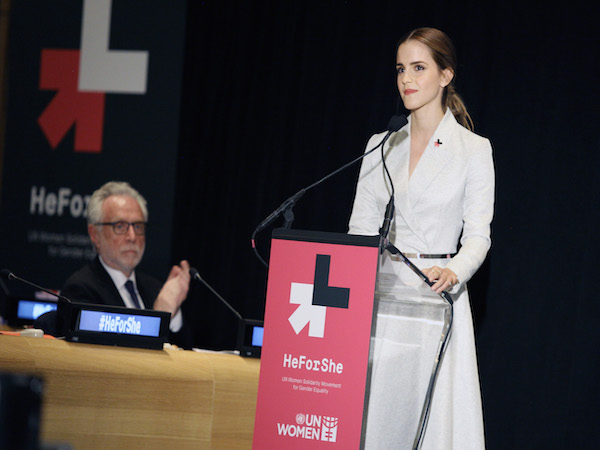 Feminism: A word. A movement. A religion. A group.

The definition of feminism means something different to everyone. It has been debated by many celebrities, political figures, writers and teachers.

Recently, the internet has played a large role in helping women find their voice and, every so often, a controversial feminism-related speech goes viral.

Emma Watson’s game-changing speech at the United Nations addressed feminism and subsequently inspired many to understand the word ‘feminist’ in a new way. This was tackled through the HeForShe campaign, which promotes equal treatment and rights for all men and women, and attempts to dissociate feminism from the concept of ‘man hating’.

Statistically speaking, HeForShe has been a huge success. The HeForShe website has received more than 235,000 pledges by men who want to take a stand for gender equality. The conference was watched more than 11 million times and sparked 1.2 billion social media conversations. Celebrities across the world including Harry Styles, Yoko Ono, Prince Harry and Hillary Clinton have signed the pledge to help put an end to gender discrimination.

But many speeches are not received as positively as others, which writer and feminist Amy Gray suggests isn’t necessarily a bad thing.

“The simpler and less offensive the message, the more chance it has of being accepted. But that means we miss out on nuance and depth in our debate,” she says.

One of the more recent feminist speeches to go viral was Patricia Arquette’s Oscar’s acceptance speech, in which she demanded equal pay for men and women. Her speech received quite a lot of backlash, mostly due to comments she made backstage.

Her intention was to talk about pay inequality, but this was misconstrued through her remarks.

“It’s time for all the women in America and all the men that love women, and all the gay people, and all the people of colour that we’ve all fought for to fight for us now,” Arquette said.

After the Oscars, Arquette clarified to Time Magazine that she wasn’t talking about her own personal position.

“What I was talking about is the other 52 percent, and how it doesn’t make sense why they’re being discriminated [against] because of their gender,” she said.

Even in 2015, women are underrepresented in CEO positions, in politics and jobs right across the board, and are still socially and economically disadvantaged.

Gillard’s speech went global; The New Yorker described it as “ladylike”; Spectator Magazine said there was “much to admire”, and The Telegraph said Gillard “played her best card”.

However, it also attracted heavy criticism.

While some responses to Gillard and Arquette’s speeches may have been negative, positive results were still achieved.

The speeches got people talking about the gender pay gap, expectations of women and sexism within governments, as well as empowering women around the world to speak up.

Placing the media spotlight on Patricia Arquette’s speech enabled her to speak about the pressure placed on women, such as the comments she received growing up regarding her crooked teeth.

“What are we supposed to look like? Men are not having these conversations,” she said in an interview with People Magazine.

Emma Watson’s speech resonates with so many different people, and is still very much in the news cycle. In January, Watson launched the second phase of HeForShe: IMPACT 10x10x10.

“I’m hopeful [the speeches] will inspire them to read and listen at a deeper level to more women,” Amy Gray says.

Celebrities are great promotors of equality for men and women alike, but there are local female heroes whose voices have been heard, but need to be heard louder. While speeches by local heroes may not gain billions of views, they are just as powerful.

Rosie Batty has been a powerful advocate for illustrating that domestic violence can happen to anyone, after her young son, Luke, was murdered by his father last year. In recognition of her work, Ms Batty was awarded the 2015 Australian of the Year. Ms Batty and Luke brought much-needed media attention to domestic violence, which affects more than one million women in Australia.