I felt like I was taking part in a legal drug trade. There were raw materials lying around the empty garage waiting to be processed. The walls were bright white, untouched by dust, and the only other people in the room were twitching from the product. 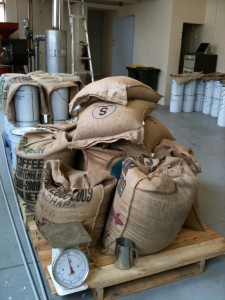 There was a periodic table of sorts blue tacked to the wall describing the sensory elements involved in the drug. I looked through familiar terms and stumbled across ones I would never associate with coffee.

Balsamic rice, apricot and beef. Who knew you could detect such distinct flavours from a little green bean shipped in from all parts of the world?

The roasting equipment was flown in from Italy, Bologna to be exact. It had been carefully picked to ensure that this new batch became a big seller on the market. I couldn’t wait to taste it; my glands were growing weak from salivating. 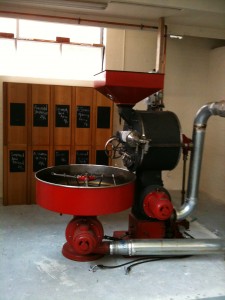 Then the cupping began. It was a slow process consisting of careful measurements and perfect water temperature. I was told the coffee had just been roasted, a 10-13 minute event that turns tiny green beans into brown, aromatic ingredients.

The grounds were at the bottom of the glass when the water was poured on top. They floated throughout the cup resembling a snow globe then finally settled on the surface.

The next step was to smell. I grabbed a large soup spoon and pushed the coffee that had settled away from me three times while trying to grab every scent the cup let off.

The grounds, by now, had fallen towards the bottom so it was time to taste. I submerged the spoon just enough to get a mouthful of the Kenyan blend that had been testing my patience. 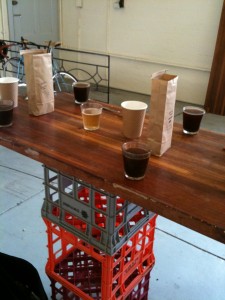 In order to properly taste, to get the full experience, the coffee needs to be slurped hastily past the teeth and directly onto the tongue. This method is supposed to make a high pitched sound as you breathe in fast. The more experienced cuppers had mastered the sound, mine came out rather gurgly.

I spit my mouthful out into the complimentary spit cup that comes with the ceremony.  I almost kept it in but didn’t want to look any more like an amateur after the gurgling. Then it was over.

My palate was obviously not developed enough to notice the apricot that made a Kenyan blend distinct. But I enjoyed the coffee and was refined enough to acknowledge it’s fruity characteristic.

The left over beans were packed up into a blank paper bag, scribbled on, then left to taste later. Cupping is something you do over and over again to the same blend to see how it ages and develops.

I had met up with Andrew Kelly, owner of Auction Rooms and roaster of Small Batch Coffee. Kelly was a cupping professional and kind enough to show me his red roaster and of course, the process. After all these years of distributing it was nice to finally meet a supplier.

Meghan Lodwick is doing her Masters of Global Communications at La Trobe University. This caffeine induced entry was originally published in her blog: For the Love of Beans!